Welcome to an ongoing inquiry about the behavior of people and dogs.
Blog Home >> Animals and the People Who Love Them >> Free to a Good Home? (Booklets, Not Dogs!)

No, not a dog, I’d never advise anyone to ever give a dog away! What I’m hoping to go “Free to a Good Home” are our booklets on house and litter box training whose prices have been radically reduced so that shelters, rescue groups and veterinary clinics can give them away for free. 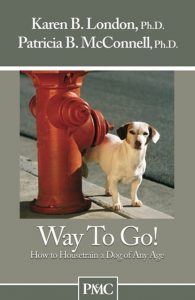 I began thinking about this when the Peggy Adams Animal Rescue League ordered 2,000 Way to Go booklets early this year. Kristi and the adoption counselors originally bought the booklets because their research showed that house breaking problems were a common cause of dogs being returned to their shelter. I talked recently to the shelter’s Director, Kristi Jackson, who said that since they began giving the booklets out in their adoption packets, their returns and hotline questions have decreased. Of course, this is a far cry from a carefully designed experiment (please someone do one!), but that’s their strong impression.

In my own practice, I found that potty training problems had the potential of destroying relationships between people and pets. It’s hard to imagine when all is going well, but when your dog or cat disagrees with you about the location of the bathroom, things can get stressful very fast. I also learned that, although it’s not rocket science to house train a dog, it’s not intuitive either. And once you’ve had a few accidents (“Oh No! I dropped my urine!) in the house, knowing what to do next makes a huge difference in the outcome. 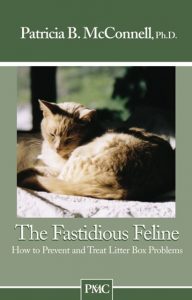 Litter box problems were equally destructive (if not more so). Most of my cat cases related to eliminating outside the box, resulting in ruined carpets, houses impossible to resell without new flooring, and in a few cases, some nasty divorces. It’s true that most cats are fastidious about their bathroom behavior, but that doesn’t mean they agree with their owners about the location of the bathroom. I had many clients whose cats avoided the litter box for reasons that seemed logical once we sorted it out (box too small–common, box in a place the cat felt insecure, litter with an off-putting smell (to a cat), and on and on. That’s why I wrote The Fastidious Feline.

After thinking about it awhile, I realized that nothing would feel better than finding a way to drastically reduce the price so that shelters, rescue groups and veterinary clinics could afford to hand them out for free. I don’t know for sure (again, research anyone?), but it seems as though people would be more likely to read a small, booklet with a pretty color cover than a one page, black and white hand out. Luckily, we found a printer who can print the booklet in large quantities that allows us to sell it for a radically reduced price. Make no mistake, we’ll barely break even on it, but it feels worth it. Now that I’m not seeing individual clients, it feels even more important to find ways to help dogs and cats anyway that I can.

The price for each booklet is only one dollar, if purchased over 50 at a time. If you work with a shelter, rescue group or clinic, I hope you’ll consider buying in bulk to take advantage of the cost savings and handing the booklets out for free in adoption/new pet packets. If  you don’t have the money, what a great fund raising idea: People love to give something specific, so perhaps a funding drive could include a purchase of a month’s/quarter’s/year’s worth of booklets? If you don’t work at this kind of organization, I’m hoping you’ll find it in your heart, if budget allows, to buy a bunch and donate them. I’ve already donated a bunch myself, and will continue to do so as time goes on.

I’d love to hear from you about your experiences with house/litter training, and if you think the booklets will help. If you adopted animal, what were you told about house or litter training? Were you given a handout? Did you read it? Do you think a booklet would help? Any ideas for me to get more dogs and cats using the right bathroom?

MEANWHILE, down on the farm. Fall, glorious fall! Cooler. Fewer bugs. Lovely colors. I’m never sure if fall or spring is my favorite season–I’m just grateful that I get them both where I live. The dogs are liking it too.

Maggie and I are working hard on progressing on our weak points when working difficult sheep. Here’s a Maggie eye view of the field at friend Donna’s place. 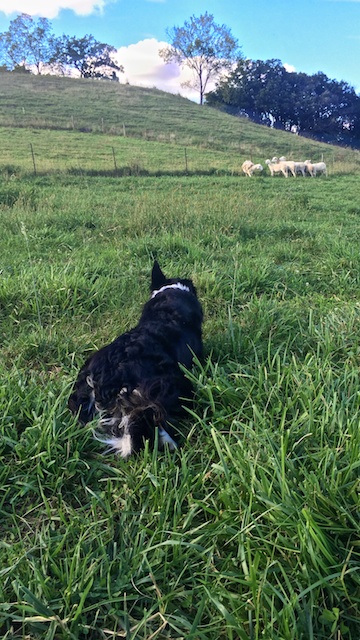 The ram named Little Big Man, also at Donna’s, is poking his head out of the barn in the photo below. Donna and I co-own him, and we’re telling him it’s time to start getting into shape. Won’t be too many months now that he’ll be coming over to do his work. In the front is his best buddy, Jackson, the billy goat. 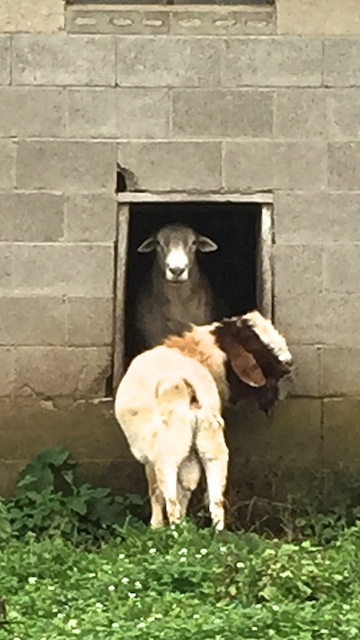