Welcome to an ongoing inquiry about the behavior of people and dogs.
Blog Home >> Animals and the People Who Love Them >> Green & Gold: Early Fall in Wisconsin

Ever wondered why the Green Bay Packer’s colors are green and gold? Well, I never did until I began noticing that the entire world seems to turn green and gold in early fall in Wisconsin. I doubt that’s the reason they picked those colors, but it sure is fitting because around here, the Packer colors show up at the same time that the world cloaks itself in the same hues. It’s remarkable how much of the out of doors is green and gold right now, so much so that I can’t exaggerate it. (Or, in the words of Ryan Lochte, “over exaggerate”.) The entire natural world does indeed seem to be an explosion of green and gold. I’ve mentioned it to several people now, and every one of them listens, then comes back later and says “You’re right!” Everything is green and gold! 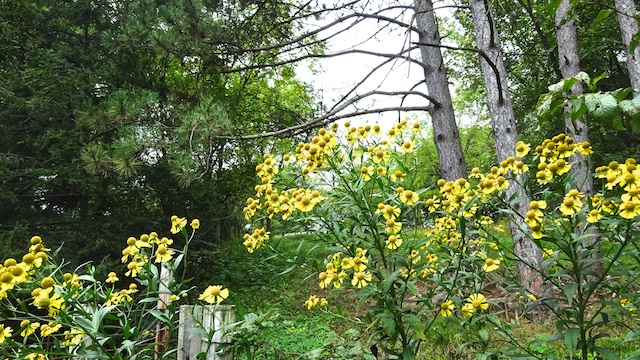 This color shift isn’t random by the way. If you pay attention you’ll note that different flower colors predominate at different times of the year. . . All because different species of pollinators (mostly insects, but also hummingbirds) are attracted to different colors, and have their peak feeding season at different times of the summer. The flowers are literally matching their blooming season with the pollination habits of insects. Here’s a study that shows that the same plants can even shift their color throughout the season to change the preferences of their pollinators. (Have you been following the amazing new research on the complex lives of plants? Amazing!)

MEANWHILE, back on the farm: We spent the weekend at the Jefferson County Sheep & Wool Festival and Maggie ran in the sheepdog trial. We are both still finding our way on the drive and cross drive, but she did lovely work on her first two outruns, fetches and lifts (50/50 on her first run!). She struggled on her third run, having drawn a difficult ewe who had run repeatedly back to the set out, and who told Maggie in no uncertain terms to stop bothering her. Maggie wasn’t quite up to the challenge, but as a competitor reminded me, it’s only her fourth trial and what she does well, she does beautifully. We only have one more trial later in October, but a Patrick Shannahan clinic right after, which is always a wonderful experience for both of us.  After our trial experiences this summer, I know what we have to work on this winter… hope the snow isn’t too deep or the ice too slippery.

It’s hard to know how far Maggie can go as a trial competitor, (and the same for me as a handler), but I do love trying for the both of us to be best we can be. And unlike Willie, who tongue flicked when I took him out this weekend to stand casually at fence (and probably thought he was about to run), Maggie can never get enough working sheep, and it’s a joy to watch her try to keep working after a run. (Again? Can’t we go again? Pleaaaaasse!)

I got a little time to explore the festival, and what a kaleidoscope of colors! I hope the colors, where ever you are, are equally beautiful. (Question: Are you seeing the same green/gold phenomenon  in the gresat outdoors where you live?)