Welcome to an ongoing inquiry about the behavior of people and dogs.
Blog Home >> 2010 >> Archives for October 2010 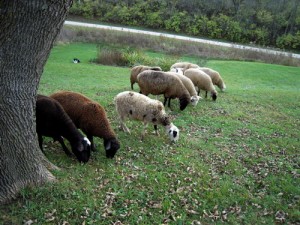 For the last two days, Willie has been acting abnormally. He regressed back to sleeping in the bathroom, instead of his dog bed beside my bed. He took his stuffed Kong in the morning to his usual place, but then wouldn't eat anything out of it. He came into the office this morning and lay down in the dark cavern underneath my desk. All atypical for him, at least in the last couple of years. There's something else that has changed these last 2 days, and that is the weather. I don't know where you are right now, but in the midwest we've been pummeled by a tsunami of wind. The wind gusts have been over 60 miles an hour, and the roar of it was so loud it kept me from sleeping on Monday night. I thought that the wind noise was probably a significant factor in Willie's change in behavior, END_OF_DOCUMENT_TOKEN_TO_BE_REPLACED 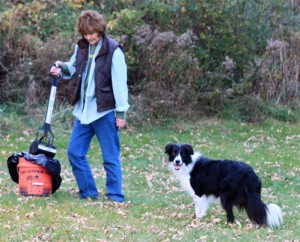 Seriously. I jokingly asked this question at the end of my talk at APDT (more on that in the next post), but although it's not exactly a burning question related to training and behavior, I still wonder about it. Honestly... what do they think? We collect it and object when they try to eat it. One of my dogs had no interest in coprophagia until he watched me collect dog feces after the snow melted in late winter. Could it be that they think we prize it in some way? Hoard it for ourselves? Or do they think about it at all? Anyone else wondered about this, or I am the only crazy one who thinks about such things? Ah, now we're back to the beginning of my talk... thinking about thinking. (Try defining what you're doing when you're thinking. Think about it about!) MEANWHILE, back on END_OF_DOCUMENT_TOKEN_TO_BE_REPLACED 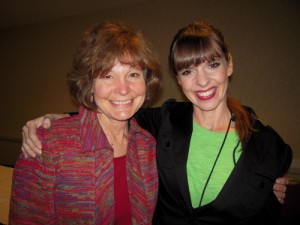 I wish everyone could have heard Alexandra Horowitz's talk that introduced the conference this morning. She gave an articulate and thought provoking speech about the "umwelt" of the dog.  "Umwelt" is a term coined by Uexkull to mean the world of an organism, as it is sensed, perceived and interpreted. The point, which was well explained by Alexandra, is that each species sees the world differently, based on their perceptual abilities (ie, bees see colors we don't, dogs smell things we don't) and the parts of their environment that are relative to them. Some have said that because each species, literally, lives in different worlds, we can never really understand what it is like to be another animal. (This was famously addressed in philosopher's Nagel's oft-cited article, "What is it like to END_OF_DOCUMENT_TOKEN_TO_BE_REPLACED 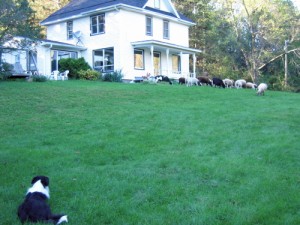 Oh my, I overslept this morning, a rare event for me, and my plans of writing a substantial blog this morning are buried under the mess of blankets and covers that I threw aside when I finally woke up and looked at the clock. Holy moly. But I'll write from the road and keep you up on the first 2 days of APDT. (I am leaving Friday morning, so I won't be able to report on the rest.) I am looking forward to so much of the first two days: I can't wait to meet Vickie Stillwell and Kyra Sundance, and will attempt to forgive them for both being young, thin and drop-dead gorgeous. The symposium on canine cognition will be a highlight for me, and as soon as my part is over (my laptop is randomly choosing not to play my videos--if you see me licking my paws and stress yawning before my talk that's END_OF_DOCUMENT_TOKEN_TO_BE_REPLACED 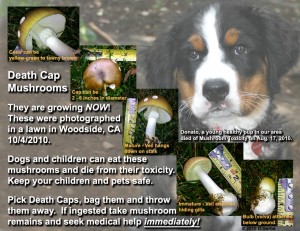 Below is a flyer from a woman who tragically lost her heart dog to a wild mushroom, the Death Cap. The Death Cap mushroom (Amanita phalloides) is not only the most common cause of mushroom poisoning in people in the US, it is spreading rapidly throughout the country, especially in some areas of California and New York. Here's a story about them from NPR. The mushroom is believed to be native to Europe, not to the US, but like many imports, is expanding rapidly with little competition. It is most common around the San Francisco area, and is found most often under live oak trees (but don't assume that's the only place it will grow). Earlier this summer I had a mushroom scare myself. We had an absurdly wet summer, and mushrooms grew up in places where no mushroom had ever been before. A END_OF_DOCUMENT_TOKEN_TO_BE_REPLACED