Welcome to an ongoing inquiry about the behavior of people and dogs.
Blog Home >> 2012 >> Archives for August 2012 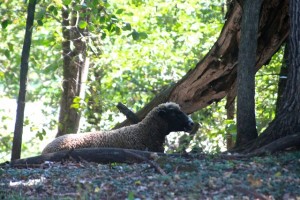 I originally called this post "Barbie's Not Always a Nice Girl," but then I thought about what the title would look like on Google and the kind of people who'd click on it. Hmm, not really my "brand," as they say. I thought though, that you'd be interested in yet another interaction between Barbie, my cantankerous, lead ewe and Willie. Barbie, as you may recall, is the only sheep who has ever seriously challenged Willie. She won a few times when she had three-week old lambs this spring, literally chasing Willie away, her anvil-like head down and ready to bash Willie into the ground. He ran away like a frightened chipmunk, because Barbie was serious, and because we all know she can be a witch, and because well, he's just not the bravest dog in the world. That's partly why I love him so END_OF_DOCUMENT_TOKEN_TO_BE_REPLACED 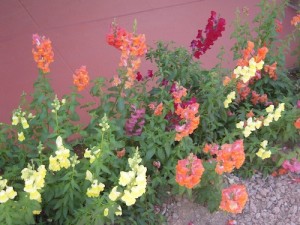 This is Part II of our case study about helping a dog after a loss (see August 24th blog for Part I). As usual, many of you came up with  insightful and helpful comments. I benefit from your thoughtfulness every day, and I thank you for it. If you are interested in this topic, either personally or professionally, I encourage you to read the first post about Dogs Grieving as well as the comments. Here are some of my thoughts and comments about the most important things to do if a dog is behaving as though he is grieving a loss: 1. ACCEPTANCE. Easiest to say, hardest to do. By "acceptance" I mean accepting that you couldn't prevent the death or disappearance of another, and that you can't 'fix' the pain that your living dog may be going through. If your dog is truly grieving (and I END_OF_DOCUMENT_TOKEN_TO_BE_REPLACED 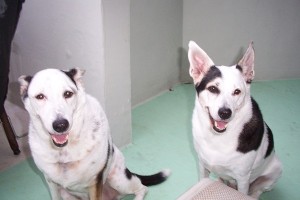 Lots of you liked the idea of doing some case studies, as well as reviewing and discussing photos and videos. I think it's a great idea, so here goes our first one: Here's Sleeves on the left, and Patch on the right. I'm sad to report that Patch died just last week and her sister Michaela died only a month ago. All three of them, "Boonie" dogs--or mixed-breed dogs as they are called on Guam where they were born, were raised together and were litter mates. The litter lost their mother at 4 weeks, and owner Cin bottle fed them and raised them together. Brother Sleeve appears to be devastated at the lost of both of his litter mates in such a short period of time (not to mention poor Cin, the owner). Sleeve appears to be grieving, and is described as "so sad" by Cin. Usually this END_OF_DOCUMENT_TOKEN_TO_BE_REPLACED 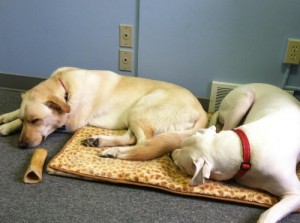 On Friday I asked you what you thought was going on here, at least as best one could tell from a still photograph. I'm the first to agree it's hard to say much from one brief moment in time, but it's a great exercise nonetheless. It helps us all focus our attention and generate hypothesis about what might happen next. It would be perfectly reasonable to suggest several different scenarios... Here's the story in this case: These two dogs are great friends and play together often. The yellow dog is a 4 yr old GR/Husky cross, Tucker, who has a tendency to nip faces when he plays. The white dog in the red coat is Lily, a 2.5 yr old spayed female Dogo Argentino, owned by Katie Martz  here at McC Publishing. Lily was responding to what appeared to be an inappropriate play action from END_OF_DOCUMENT_TOKEN_TO_BE_REPLACED 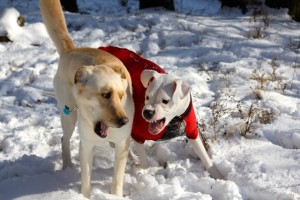 Maybe not a 1,000 in this case, but what words would you put with this photo? What do you think is going on here? I'd love to hear what you all think. I know the dogs, the context and what happened before and after, so after I collect your input I'll let you in on the story. This might be a fun exercise for us to play every once in a while, yes? Let me know if you like the idea. I'll write another post on Monday and describe the dogs, their relationship and what happened immediately after the photo was taken. But before that I'd love to hear how you evaluate what you are seeing. And no fair cheating if you saw this on Facebook last week! It's just such a great photo I couldn't resist putting it out here. So... what's going on here between these two dogs? What are the most likely END_OF_DOCUMENT_TOKEN_TO_BE_REPLACED