Welcome to an ongoing inquiry about the behavior of people and dogs.
Blog Home >> Canine Cognition >> Helping a Dog Through a Loss

This is Part II of our case study about helping a dog after a loss (see August 24th blog for Part I). As usual, many of you came up with  insightful and helpful comments. I benefit from your thoughtfulness every day, and I thank you for it. If you are interested in this topic, either personally or professionally, I encourage you to read the first post about Dogs Grieving as well as the comments.

Here are some of my thoughts and comments about the most important things to do if a dog is behaving as though he is grieving a loss:

1. ACCEPTANCE. Easiest to say, hardest to do. By “acceptance” I mean accepting that you couldn’t prevent the death or disappearance of another, and that you can’t ‘fix’ the pain that your living dog may be going through. If your dog is truly grieving (and I think some do, more on that later), it helps greatly to understand that you can’t really ‘fix’ it, anymore than someone else can make your pain go away when you are grieving. Yes, others can help ease the pain, and soothe and support, but no one can do what the griever wants–which is getting their friend back. What does help many of us is acknowledgement that the pain is there, and I suspect that might also be true of dogs. I realize that some do not agree, but my experiences suggest that some dogs really do grieve a loss in ways similar to humans, and perhaps finding some way to acknowledge that, without trying to ‘fix’ it might be helpful.

Now I suspect that some of you really are going to think I’m crazy, but one way to acknowledge it is to talk about it. Will your dog understand what you are saying? Nope, not in the sense that a person would, but just saying the words has an impact on your behavior and emotions and perhaps that has an impact of our dogs. I’ve heard many stories of dogs changing their behavior after someone sat down with them and said “Chief is gone and won’t be coming back. I am very sad about it and I think you may be too.” I know, I know, I can see folks shaking their heads, but I don’t think it matters that much that your dog understands the words, or even the concept of death. There’s just something about giving voice to an emotion that, just perhaps, might help a dog sort out his or her own confusion over what’s happening.

2. ALLOW YOURSELF TO GRIEVE: I agree wholeheartedly with many of the comments that if you are sad your dog will know it, and I don’t think it’s good to try to hide your grief from your dog. That said, I did ask Cin about how much she’d been crying around Sleeve, because I’ve had clients whose dogs appeared to be overwhelmed with their owner’s grief. This is a very tricky line to walk… not trying to hide your own sadness around your dog, but being aware that, perhaps like children, dogs can be extremely sensitive to your suffering and feel powerless to ‘fix’ it themselves. For myself, for what it’s worth, I’ve found that for the first few days after losing a dog I am not capable of taking care of much of anything. I’ll spend time alone, time with closest friends and time with my remaining dogs, usually very quiet and in a kind of a shock. I think dogs need something similar to what we need, gentleness, caring concern and time time time.

3. STICK WITH ROUTINE OR CHANGE IT UP? I suspect that time is the answer to the question of which is better, “Keep things the same,” or “do new things”? Reader’s comments from last week, as one of you so observantly noted, were about equally split between “keep up the usual routine” and “add new things into your dog’s repertoire.” Early on (the definition of which is, of course, extremely variable depending on the dog), I think it’s important to keep things the same as much as you can. Perhaps for the first 3 days, or 3 weeks…? Let your dog grieve, be kind and gentle and as “there” for your dog as you are capable of. However, at some point I’ve found it very helpful to create new routines. Do things with your dog that aren’t triggers for “But where’s Chief?” Surely every context and activity that used to include the deceased dog is a reminder that he or she isn’t there anymore. So I’ve advised clients to take walks in new places (if the dog enjoys them), teach new tricks, perhaps meet new doggy friends if that is something your dog might enjoy. I always like to add Nose Work in for any needy dog, given that it’s the nose that defines a dog’s understanding of the world, and their way of finding their place in it. Many dogs seemed to be thrilled that we have caught on to their ability and want to play too, or at least that we are giving them a chance. And it’s something you can do with dogs of any age, even if they are geriatric and slow moving.

I make this recommendation in the belief that it’s important to be aware how powerful classical conditioning is, and how our emotions & expectations can be influenced by environments and actions. I remember flying for the first time after my father had died. It had been many months, closer to a year, and I frankly hadn’t thought about him in quite awhile. And then I got on the plane and began to cry, because every time I’d ever been on a plane my father had been alive. Flying had nothing to do with him directly: I didn’t fly with him or associate him with planes in any way. It was just the confluence of two events that hit my emotional brain like a rock. These systems are profoundly primitive, and there’s every reason to believe they function in dogs in similar ways to the way they function in us.

4. EXPECT ANYTHING OR EVERYTHING. I’ve seen dogs react to the death of others in just about every way possible. Lassie sniffed Mist’s body and walked away as if she’d sniffed an old shoe. But when Tulip died, she paced around her body in circles, finally lying down beside Tulip with her head on the ground. Lassie’s father, Luke, paid no attention to another dog’s death at all. When I finally encouraged him to sniff the body of Misty, he snorted and startled backward like a frightened horse. I’ve seen and heard about dogs who seemed to pay no attention to either the absence of a dog or its body. I’ve seen and heard about dogs who reacted by not eating for days, sometimes weeks. There are a few things to keep in mind here: a) just because a dog doesn’t visibly react doesn’t mean we know they are not ‘reacting’ emotionally and b) not only is every dog different, but his or her relationship to any other dog varies greatly. Lassie was truly relieved when Misty died, appeared to be distraught when Tulip died and devastated for months when her father died.

What’s important to remember is that there is no “right” in how your dog responds. Accept it (ah, there’s that word again!) and go from there.

5) WHAT IF MY DOG WONT’ SNAP OUT OF IT? If a dog stays quieter than usual, has little appetite and/or has no interest in social interaction or play after several weeks, it is probably time to make an effort to change his emotional state. Long walks are truly therapeutic for dogs as well as people, off leash ones, if they are safe, are absolutely best. New experiences, as mentioned earlier, can be very helpful, as well as new play partners or companions.  Don’t get a new dog for your own home if you don’t want one yourself, but there’s a long list of dogs who perked up when some playful little cutie entered the house. (And a list of dogs who hated it, so be sure you know your dog!)

You are always wise to consult a veterinarian if your dog seems listless for an extended period of time. It is possible that the change in behavior is correlated in time with the death of another, but not due to it. If there is not treatable medical or physical cause, you might consider adjunctive medicine if there is a well-trained practioner in your area.

6) LAST BUT NEVER LEAST: Take care of yourself as if you have just had surgery. Your brain thinks you have. See my post Love, Guilt & Putting Dogs Down for more information about how your brain processes pain and grief as similar things. Once I understood that fact (thanks to the brilliant neurobiologist Jaak Panskepp), I’ve learned to treat loss as if it was a serious injury–with gentleness, care, compassion, and the understanding that time is the best healer of all. Good advice for our dogs too, yes?

And what do we do for people who have had surgery? We bring them food and flowers. Since I can’t deliver strawberry/blueberry pie to all 24,000 of you, here are some flowers. I think I’ve already posted this picture, but it made me happy to look at it. I hope it does you too. 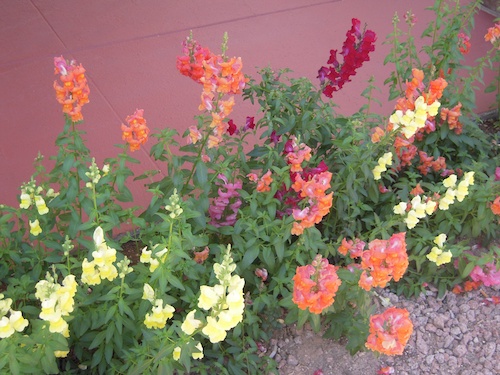