Welcome to an ongoing inquiry about the behavior of people and dogs.
Blog Home >> Animals and the People Who Love Them >> Book Review: Dogs and Human Health

Dogs & Human Health is user-friendly book about the “New Science of Dog Therapy” that nonetheless contains a plethora of references to good, solid science. (There are 50 pages of references at the end of the book. Be still my heart.) Dr. Milena Penkowa, a neuroscientist and medical doctor in Denmark, has produced something of interest to all dog lovers, not just those of us who have therapy dogs. She briefly discusses

early interactions between people and dogs, has a short section on the history of therapy dogs, but most of the book is about the positive effects that interacting with a dog has on us–for at little as twelve minutes.

We all (at least most of the readers of this blog) know that in a general sense, dogs are “good for us.” I’ve talked at length about the power of oxytocin, which is released when we are petting, or even gazing, at our dogs. Oxytocin modulates inflammation, decreases the perception of pain, and is central to feelings of social attachment, love and trust. And–no surprise here–oxytocin is increased in the body when you pet a dog, even one you aren’t familiar with.

But did you know that just five minutes with a dog could significantly increase IgA antibodies in health care professionals, while twenty minutes of “quiet resting” actually decreased the levels of this

important part of our immune system? (Barker et. al. 2005) Another study referenced in the book (Charnetski et. al. 2004) asked college students to either pet a dog, pet a stuffed dog, or sit on a comfy couch for eighteen minutes. Only the students petting a real dog showed significant increases in immunoglobin (IgA), and thus had their immune system boosted by that short interaction.

According to Penkowa, the benefits of dog ownership are far reaching: Those who grow up with dogs are less likely to have asthma, eczema or atopic dermatitis. The presence of a dog increases neurohormones like dopamine and prolactin that “contributes to the immune system’s tumor surveillance,” and might explain why dog “exposure” is related to reduced cancer occurrence. (Penkowa cites eight studies here to back up this claim, the most recent being Rojas Vega et al. 2012 & Sarkar et al., 2012.)

My only criticism is that I haven’t found references to the studies that don’t support the “dogs are good for us” hypothesis. For example, Gilbey and Tani (2015) argued that many of the studies showing positive effects of dog ownership or animal assisted therapy are lacking in scientific rigor. McConnell and Brown (2011, not me, fyi), found that pets can serve as important sources of social support, as cited in Dogs & Human Health, but pet ownership did not correlate with decreased rates of depression, or even loneliness, compared to people without pets. I didn’t see that finding mentioned in the book, and I wish it had been there. For another look at studies that find a range of effects of pet ownership (or none at all), see Harold Herzog’s excellent book, Some We Love, Some We Hate, Some We Eat.

I emailed the author about this issue: She wrote that she originally had references to studies that found no positive effects, and “went back and forth” about leaving them in or taking them out. It looks as though the publisher (I’m guessing here) insisted on taking them out. That’s a shame, but the book is still an invaluable resource, full as it is with study after study that looks at the positive medical and psychological effects of dog ownership.

Full Disclosure: Milena included some lovely comments about my book, For the Love of a Dog in her own book, and told me in an email that it has been a source of inspiration for her. She even said that she and her dog, Snubbi, carry a little bit of my dog Cool Hand Luke with them every day as they walk in the fields. Made me all gooey to read it. As did Dr. Penkowa’s (MD, PhD, DMSc) comment that she was motivated to write the book after Stubbi (in the photo) helped her through some difficult times in her own 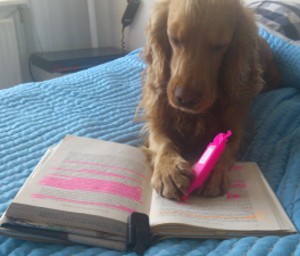 life, and then went on to alert to cancer in 5 patients who had no idea they had it. On the other hand, twice they visited cancer patients without Snubbi alerting–and it turned out they had been misdiagnosed and did not have cancer at all. The photo, by the way, is of Stubbi, “reading” For the Love of a Dog. Looks like I got my oxytocin hit already today!

Bottom line: I hope that this book encourages more health professionals to take the therapeutic effects of our relationship with dogs seriously. In spite of the impressive number of studies that do show a significant and positive effect of dogs in the right context, we have a long way to go to convince the powers that be that “Take two dogs and call me in the morning” is a good prescription. You can follow and support Dr. Penkowa’s work on her Facebook page, Dogs and Human Health.

MEANWHILE, back on the farm: Summer turned to fall in a blink of an eye, and it’s time to store the magic of the summer sun as frozen tomatoes and plums. The tomatoes were washed and cooked into “Red Sauce,” a thinner-than-store-bought-but-oh-so-fresh-and-flavorful sauce for pasta. I turned a basket of Roma tomatoes into dinners that we’ll enjoy throughout the winter, savoring the warmth of summer in the dark months of winter. The plums, sweet, juicy and small, are cooked up in boiling water and pushed through a sieve to separate the flesh from the seeds and skin. I’ll freeze the result, and later combine it with wild apples to make “Plum Apple Butter Sauce”. Very yummy on toast, and my favorite addition to the local pork we’ll be getting soon from just down the road.

Here are some plums still on the tree. You can’t tell from the photo, but they are much smaller than commercial plums, little bigger than a fat quarter. But oh, my, they cook up nicely with the applesauce I’ll make later in the year! 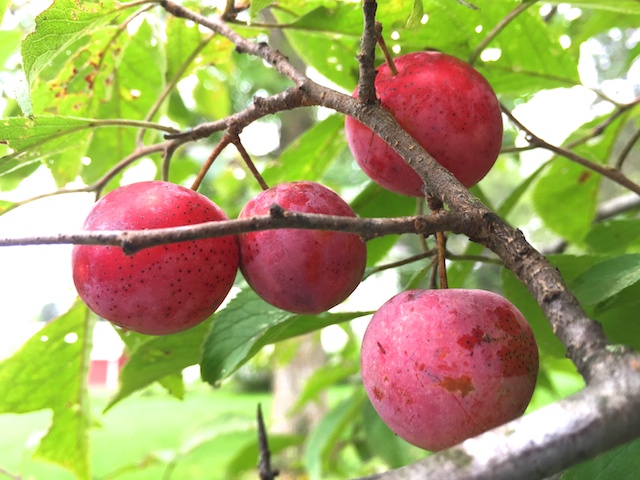 Equally colorful, these Roma tomatoes from Vermont Valley Community Farm have been turned into quarts of Red Sauce, thinner than commercial “spaghetti sauces,” but tasting like sun and summer in the depths of winter. We had it on linguini last night. Yum. 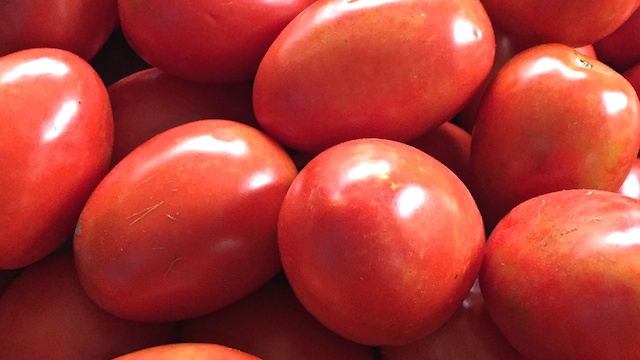 « Repeating Cues: Information or Affect? (Repeated)
What are You Reading? Watching? »