Welcome to an ongoing inquiry about the behavior of people and dogs.
Blog Home >> Animals and the People Who Love Them >> Can Fake Dogs Help Real Dogs?

Can we learn anything about a dog’s behavior around unfamiliar dogs with the use of a fake, stuffed dog? That is the question asked by a team of researchers in Massachusetts, who did a study comparing the responses of 45 shelter dogs to a live dog and a fake, plush, stuffed dog. The real dogs were presented with a neutered, male American Staffordshire mix and a similarly-sized, fake dog who was the same size as the real dog but is described as “having the appearance of a pointer breed dog”. Individual behaviors were recorded as occurring or not (approach, sniff, bark, growl, back away, etc.) and were also later lumped into three categories: “aggressive, fearful or friendly/playful”.

The authors summarized the results by saying that “friendly” responses were the responses most likely to be consistent, in that most of the “friendly” dogs were friendly to both the real and the fake stimulus. However, they found little agreement between responses to real and fake dogs for what they labeled as “aggressive” behavior. In total, 17 dogs showed some form of aggressive behavior toward either the real or fake dog; 8 toward the real dog, 12 toward the fake dog, but only 3 dogs shown any kind of aggressive behavior toward both categories.

On the other hand, 32 of the 45 dogs showed fear in at least one of the conditions, 21 to both real and fake dogs,  8 of these toward the fake dog only and 3 toward only the live dog. Thus, fearful behavior was a bit more consistent than what was labeled as aggressive behavior.

I have quibbles about some of the details of the analysis (“tail wagging” was scored as “friendly, ” although their comments in the Discussion section make it clear they are aware this is not always the case), but I credit the researchers for initiating the inquiry. Note that CAAB Dr. Pam Reid has also done work in this area, although has not yet published the results. I look forward to reading them.

This is important because some shelters are using fake dogs as evaluative tools to ask if a specific dog is dog-dog aggressive. If you’ve never seen work with “fake” stimuli, this isn’t as crazy as it sounds. Just as people sometimes respond to statues, stuffed animals or cartoons as if they are real, there are many cases of dogs responding to stuffed dogs, or even large dolls filling in for children, as if they were real. One researcher in France (sorry, can’t remember the name) painted a silhouette of a dog on the wall and noted that dogs approached it appropriately as if they saw it as a dog, and were most likely to sniff its inguinal area as if it were a real dog. I have a quilted fabric with the silhouette of a cat on it, and I can’t tell you how many dogs have looked up and barked at it. Thus, there does seem to be a predisposition of visual animals to respond to what ethologists call “sign stimuli,” meaning that some stimuli are inherently meaningful to the animal who sees or hears them.

I’ve always speculated that fake dogs, being stiff and motionless by definition, are more likely to elicit fear or aggression than a live dog would. After all, real dogs usually respond to another with some kind of action, whether it is looking away, flattening its ears, or lunging forward and barking. Nothing makes me more on guard than a dog who goes stiff and motionless, so it makes sense that until a dog realizes that the stuffed one is fake, it would be more reactive than usual. Note that the fearful reactions to the fake dog were over twice as common as to the real one. (But also note that the sample was very small.)

However, many behaviorists are strongly against the use of fake dogs as predictors of dog-dog aggression in a shelter setting. I concur, at least not until we have a lot more research on whether a dog’s reaction really is predictive.  But to muddy the waters, I can’t resist adding that somewhere deep in a storage closet is a video I made of three of my dogs approaching a stuffed dog, and each was 100% consistent with the way they approached unfamiliar real dogs. (Border Collie Luke approached enthusiastically, tail up but loose and waving, Border Collie Pippy Tay groveled her way toward the dog as per usual, and Great Pyrenees Tulip strode forward, tail, head, ears up and forward, barking what we called her “Announcement Bark.” But that is just one set of observations, and we have to be careful about the predictive value of anecdotes.

There is, though, a very important use of fake dogs, which is using them to train owners how to train their own dog when out walking on a leash. I’ve used my own fake dog often to help owners learn how to respond when they and their own dog see an unfamiliar dog out in the street. We all know how context-depending learning is, and even placing a fake dog on the sidewalk creates enough of a stimulus to begin training both person and dog how to respond. In that context I have found fake dogs to be invaluable.

MEANWHILE, back on the farm: How could I resist? I brought the office’s stuffed dog out to the farm to see what would happen. It turns out that Tootsie, Willie and Maggie behaved exactly (or close to it) as they do if a new dog comes to visit.

First, I let Tootsie out, and she ran toward the fake dog, body loose, and sniffed it from the front, just as she does when she greets real dogs. (She always begins her greetings that way, then moves to the inguinal area only if the other dog is paying her no attention.) She always appears  happy to meet other dogs, but then completely ignores them after a first greeting. 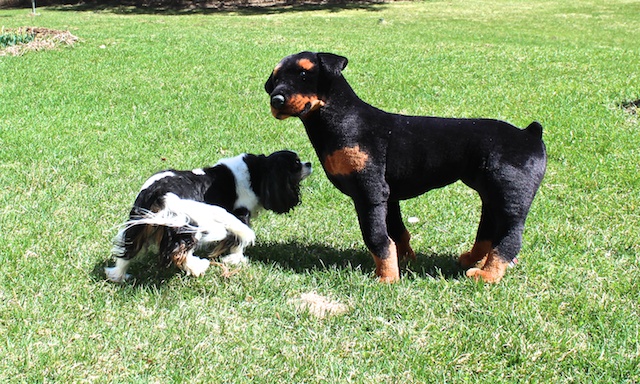 Then I let Willie out. As usual, (now, not when he was younger), he went running toward it, tail up, no barking or growling. 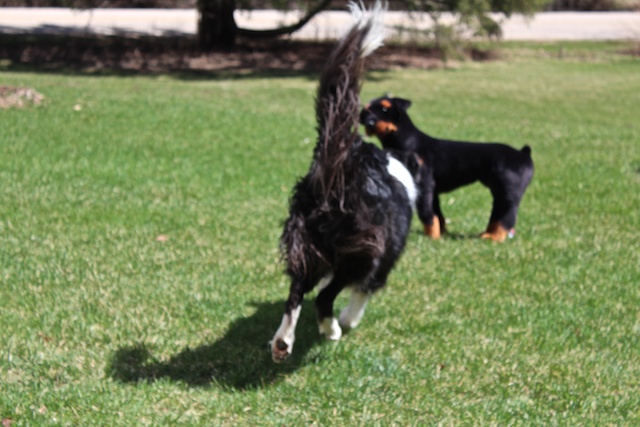 As is his habit, he first went to the dog’s hindquarters and sniffed.  (A more appropriate response than Tootsie’s by the way, remember that Toots was a puppy mill dog). You can’t tell by these photos, but his tail went down in between these shots, then up again. After sniffing the dog’s hindquarters, he went around to the front, sniffed again, and then moved away and urinated. 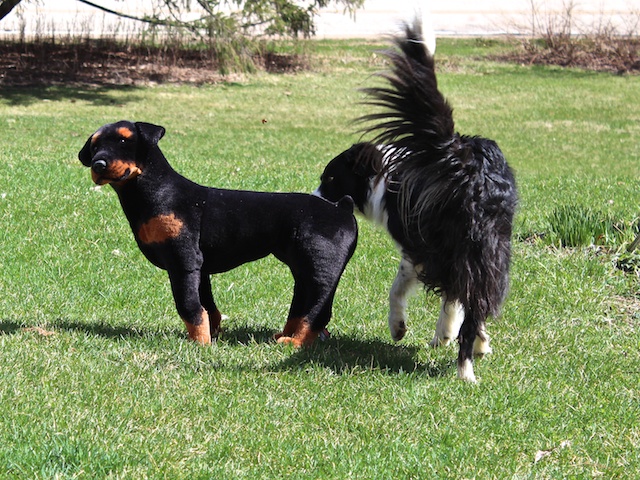 Maggie barreled out, also as predicted, with barking full of both fear and the potential of aggression. (We’re working on it; she is much improved!) Once Maggie greets a new dog she is lovely with it; she actually has some of the best social skills of any dog I’ve ever known. However, she is nervous about new dogs, and you couldn’t miss that when she ran barking (ambivalent barks with lots of high and low notes… I attribute to both fear and being on offense.)

But watch what happens here. As Maggie charged out of the house, barking and growling, Willie begins to move toward her as if blocking her movement. 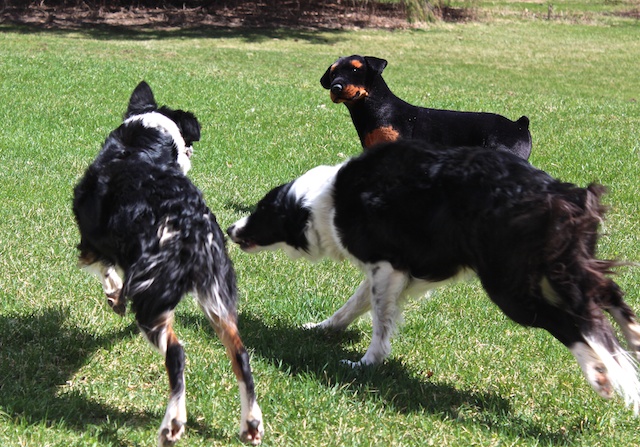 Sure enough, that’s what he was doing. He clearly runs between her and the fake dog. She is faster than he is, and after the photo below she pivoted back toward the dog, ran up and sniffed it’s muzzle. She spent the longest time of all the dogs sniffing the model, and even barked at it after I brought her back in the house. 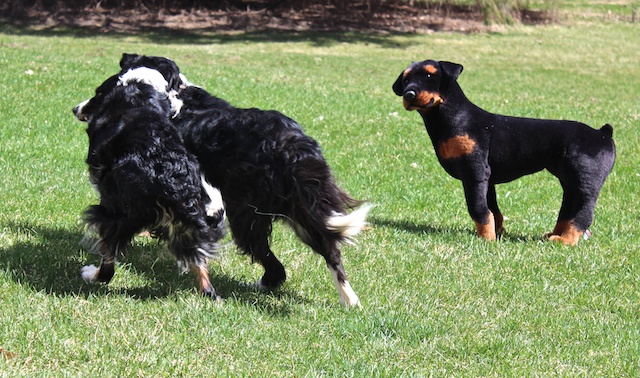 Interesting stuff. I want to re-iterate that I do not think a similar test in a shelter setting is enough to predict if a dog is dog-dog aggressive, but, I do find it interesting to watch a dog’s response to a fake dog.  What about you? Does your shelter use fake dogs to evaluate dogs? Has your dog ever reacted to a model or statue as if it were alive? I can’t wait to read about your experiences; I find this topic fascinating.

OTHER FARM NEWS: No lambs. Zippo. And Lady Baa Baa was due Saturday. Please explain to her that I’d appreciate it if she’d have her lambs soon! But the flowers are finally starting to bloom! Yeah spring…. 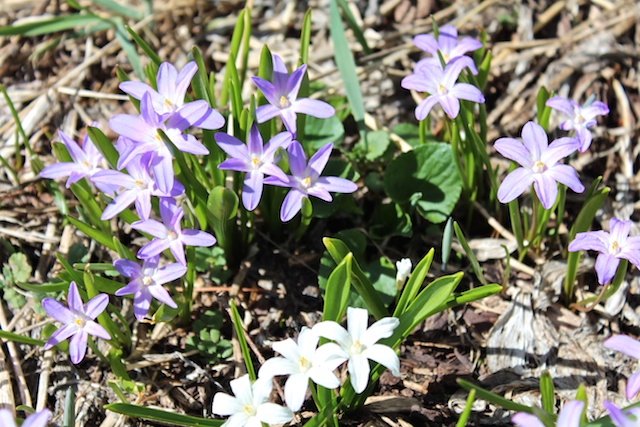