Welcome to an ongoing inquiry about the behavior of people and dogs.
Blog Home >> Animals and the People Who Love Them >> Canine Social Cognition – What Do We Know? 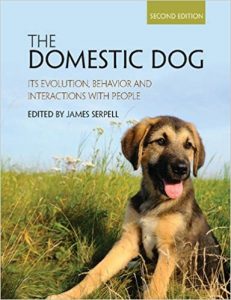 In March I wrote a review of James Serpell’s 2nd edition of  The Domestic Dog: Its Evolution, Behavior and Interactions with People.  In the review I said “This chapter [on social cognition] is the ultimate updated resource on social cognition in dogs, and is practically worth the price of the book.”

I’ve been reading through the chapter, and have decided it IS worth the price of the book, all by itself. That is, at least, if you find understanding a dog’s mind as interesting as how to influence his or her behavior. (Is there an emoji for “dog brain geek?”) “Social Cognition and emotions underlying dog behavior,” written by Friederike Range and Zsófia Virányi is chock full of information. It raises as many questions as it provides answers, but that’s exactly what it ought to do given how little we really know about what is going on behind those liquid eyes and furry foreheads.

FOCUS OF ATTENTION: Studies have consistently found that dogs attend to human behavior far more than members of other species, even wolves raised from a very early age by humans. Given how much information dogs can glean from our behavior, this is not surprising. But it is notable, because you might think that dogs would pay more attention to the behavior of another dog than a person, given that dogs are conspecifics. 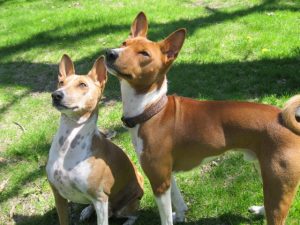 The authors state: “Still, it is an intriguing question whether this close and selective attention is an expression of emotional dependency or a form of information seeking.” They argue that studies by Duranton et al. 2016 and Merola et al. 2012) support the latter. 80% of dogs in one study looked back at their owners when presented with a scary object, “suggesting that they were seeking information from their owner rather than seeking emotional support.” Less confident dogs looked back more than confident dogs, but did not approach their owners at higher rates–supporting, to some, the contention that dogs are looking for information from their owners rather than seeking support. I’m not enrolled in this argument yet–surely looking back could be both, as in “Is my human afraid of this object?” as well as “Is my human still there to provide safety and support if I need it?”

One thing we do know is that in many other species, especially primates, individuals with higher social ranks tend to attract visual attention more than those of lower ranks. Familiar individuals get far more attention than unfamiliar ones even in chickens. Given that we owners have 1) a lot of information that dogs need and 2) the ability to open doors and cabinet, it makes all the sense in the world that dogs tend to pay attention to us. But look at the results of this study (Szetei et al. 2003): Dogs “relied more on human direction than on their own first-hand knowledge of where a reward could be found.” That’s pretty amazing. In another study, dogs even chose one treat instead of 8 treats if a human called their attention to the one (Marshall-Pescini et al. 2011). (If I recall correctly, another study found that it made no difference if a dog was reinforced with a small amount of food or a large amount. Either quantity had the same effect on learning. That supports the practice of many of us of giving “jack pots,” in which the dog gets one treat right after another for a job well done, rather than one big treat just once. 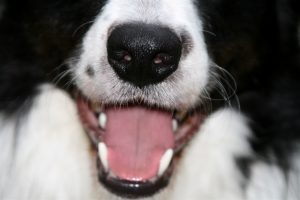 HELLO HUMAN, ARE YOU PAYING ATTENTION? Several studies have found that dogs can communicate to us where something is hidden that we can’t see (Gaunet 2010, Lakatos et al. 2012, Mikosi et al. 2000). And you know exactly how they do it: Look at the object, look at us, look at the object, look at us. We’ve seen the movies in which Lassie saves Timmy by running to the house, looking repeatedly at the parents, and back toward the woods, where Timmy has fallen into the creek/well/river/waterfall/abandoned washing machine. I just experienced it myself with Maggie, who couldn’t work sheep for two and a half months because of her own knee injury. Every evening, while I sat on the couch, Maggie would look out the window toward the sheep beside the barn, look at me, look at the sheep, look at me. Anthropomorphizing be damned, I’d bet the farm (and I have one to bet) that Maggie was trying to get my attention on the sheep, in hopes it would result in us going out to work them. 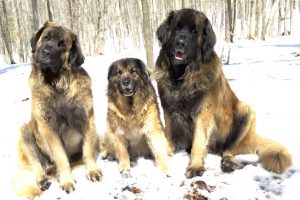 WHAT DO DOGS KNOW ABOUT OUR  MINDS? That’s the million dollar question right now, in many cognition studies of any species. Called “Theory of Mind,” the question is can other animals reason about what’s going on inside our sparsely furred heads? Do they understand that we have beliefs, desires, consciousness and awareness of the emotions of others? You might say, of course they do, but keep in mind (ahem) that it takes humans several years to develop a full understanding that other’s have minds similar to their own. (Ask a one-year old child to hide from Daddy and she’s likely to cover her own eyes.)

There are a multitude of studies on theory of mind, but just a few so far on dogs. Virányi et al. (2006) did a study that found dogs indicated the location of a hidden toy “more intensively” if the owner was absent when the object was hidden. The suggestion here is that the dog understood that the owner was not present for the hiding of the toy, and therefore needed more help in retrieving it than an owner who saw it hidden.  The authors conclude however, that we know surprisingly little about how much dogs understand about the minds of others, much less about their own minds. Here Here to that.

This is just an appetizer of the many issues raised in this chapter, from Imitation to the concept of Fairness. The best part of reading it for me was seeing more evidence that dogs have finally become accepted subjects for scientific study.  In the mid 1980’s, when I was working on my dissertation, one of the members of my committee said “I’m not sure you can do good research on dogs.” You could study arctic wolves or sea cucumbers or snow fleas, but clearly familiarity bred contempt at that time. I said over and over again that dogs are the perfect vehicle for us to study a massive number of things–the fact that they live with us and cooperate with us makes them more valuable, not less. What a joy for me that the decades have finally evolved such that kind and respectful research on dogs is being done allover the world. 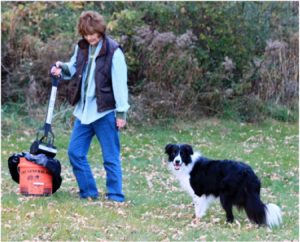 Here’s my question to you: What do you want to know about dogs that we don’t know? What studies would you do if you had the time and the money? Any question is welcome, including the question I’ve wondered about for decades: What do dogs think we do with all the poop we pick up?

MEANWHILE, back on the farm. That’s where I am, still recharging my batteries, healing my body, immersed in friends, flowers, dogs and new recipes. Here’s Polly, lolling on top of my car in the sun. 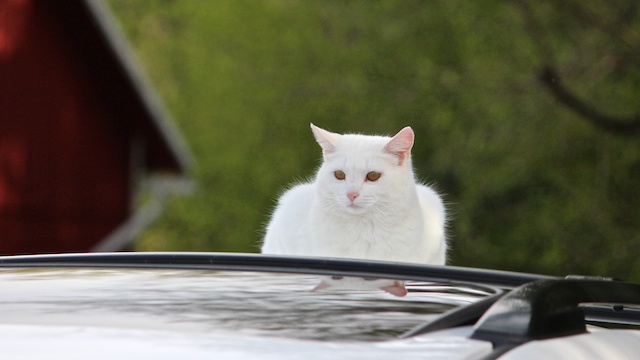 Not on the farm, but close by is Black Earth Creek, a Class 1 Trout Stream and a source of wonderful bird life. 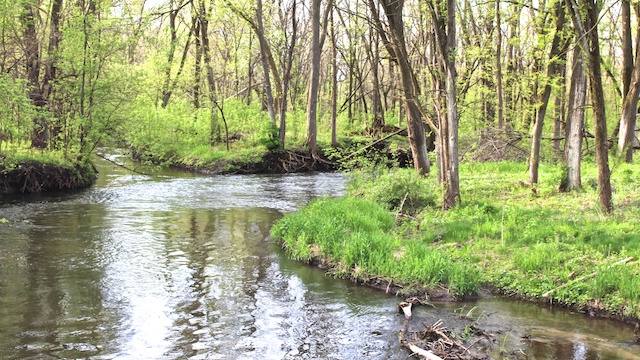 I couldn’t resist posting this photo of Snow White in the midst of scratching her head with her hind hoof. An ungainly posture for a sheep, much less a princess. 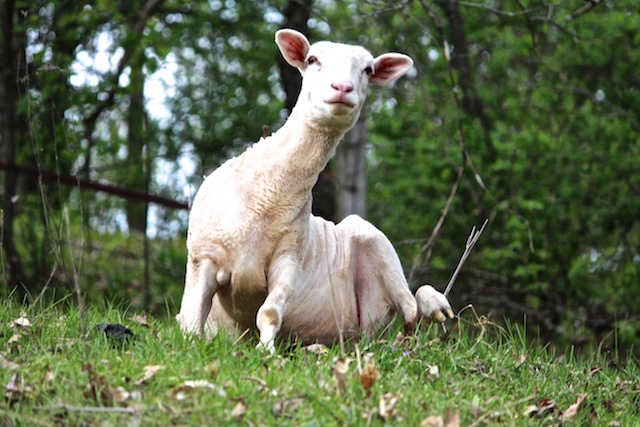 Finally, here’s the tent that Jim worked so hard to build (and rescue after it was damaged by an especially heavy snow). I’m looking forward to many mornings waking up to bird songs and the sun on Blue Mounds in the distance. 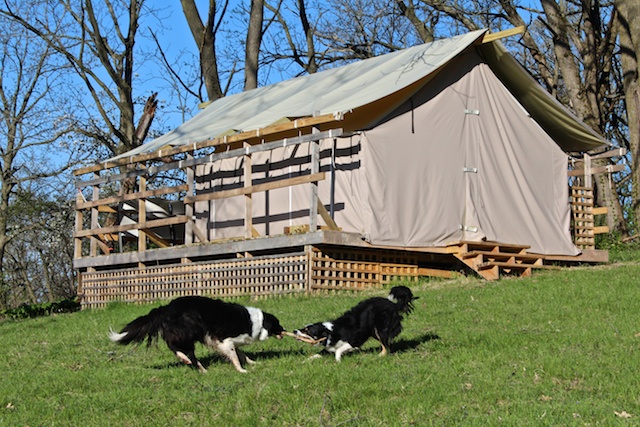