Welcome to an ongoing inquiry about the behavior of people and dogs.
Blog Home >> Animals and the People Who Love Them >> Dogs, Anger, and Anger About Saying That Dogs Can Get Angry.

So I don’t bury the lead, here’s where I’m going today: Why does the concept that dogs can get angry make some people angry? I was reminded of that when I was looking something up in For the Love of a Dog (I often forget where I wrote what . . .) and ran into the introduction to the chapter on anger. That brought me back to an incident years ago, in which someone became enraged at my suggestion that dogs could get angry.

I wrote about this briefly in a November 2008 post, relating my experience at a day-long meeting at the National Institute of Health on the human animal bond.  I was one of several speakers, in the company of zoo-anthropologist Dr. James Serpell, Dr. Sandra Barker and Dr. Joan Esnayra. Here’s what I wrote in November 2008:

I spoke second, after Serpell, arguing that the profound love that many of us have for our dogs is a biological phenomenon that deserves more scientific attention. In my talk I speculated, as I did in the book For the Love of a Dog, that one of the reasons we become so intensely attached to dogs is that dogs have such expressive faces, and as Darwin argued over a century ago, their expressions of fear, anger and happiness are very much like our own.

Those comments were soundly criticized by a veterinary behaviorist in the audience who argued that I was being problematically anthropomorphic to 1) make any association between the expressions of people and the expressions of dogs and, 2) use the word ‘anger’ in association with dogs. I can’t quote the person exactly, but the point was that anger is a human construct, and it is wrong to attribute it to dogs.

What I didn’t say then, and will say now, is that this person was not just in disagreement with I said. She was furious about it. She was actually shaking with emotion as she criticized me. When I sat down, practically shaking myself after being so publicly castigated, James Serpell said something like “What the hell did you do to her?” But I’d never met her before in my life. Continuing with my comments in 2008:

I was (and am) fascinated by her criticisms. First off, the evidence continues to grow about the continuum of the biology of emotion in mammals.. we share the same basic neuro-anatomy related to emotions, the same neuro-physiology related to emotions (serotonin, dopamine, oxytocin to name a few) and many of the same behavioral reactions. Emotions are such primitive things, it always interests me that ascribing them to non-human animals makes people uncomfortable. Of course, there’s a huge difference between how an emotion is processed in the brain of a human and that of a dog, but the glass is half full as well as half empty, and the biology of emotions is far more similar in dogs and people than it is different. In addition, I’d love to claim credit for the notion that the expressions of emotion on the faces of dogs and people are related, but since Darwin wrote about it over a hundred years ago I don’t think I’d better. Unless you believe that people and other animals have virtually no biological connection of any kind, it is sound science to compare the expressions of two highly social mammals who use subtle visual signals to maintain social harmony. 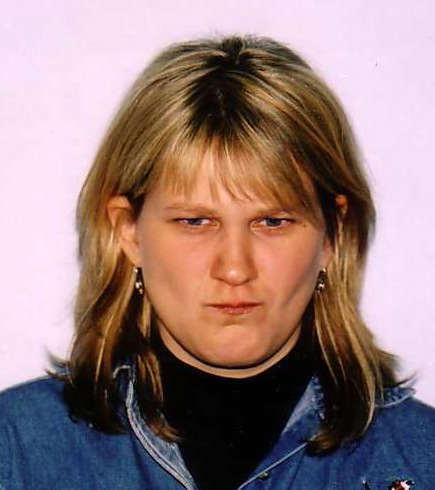 This is friend and colleague Chelse Wagner, helping me create photos for For the Love of a Dog by making an angry expression.

I am especially interested in the expressed concern that anger is “human construct.” I’ve heard that before from several different fields, and yet, anger, or ‘rage’ as it is often called in the literature, is considered one of the most basic and primal of emotions. Jaak Panskeep, the author of Affective Neuroscience: The Foundations of Human and Animal Emotions, calls rage one of the “core” emotions of all mammals.  Truly, you can’t attribute fear to a dog and deny then that a dog could get angry… those two emotions are too closely tied together in so many, many ways. [For example, the amygdala is critically involved in the emotions of both fear and anger.] 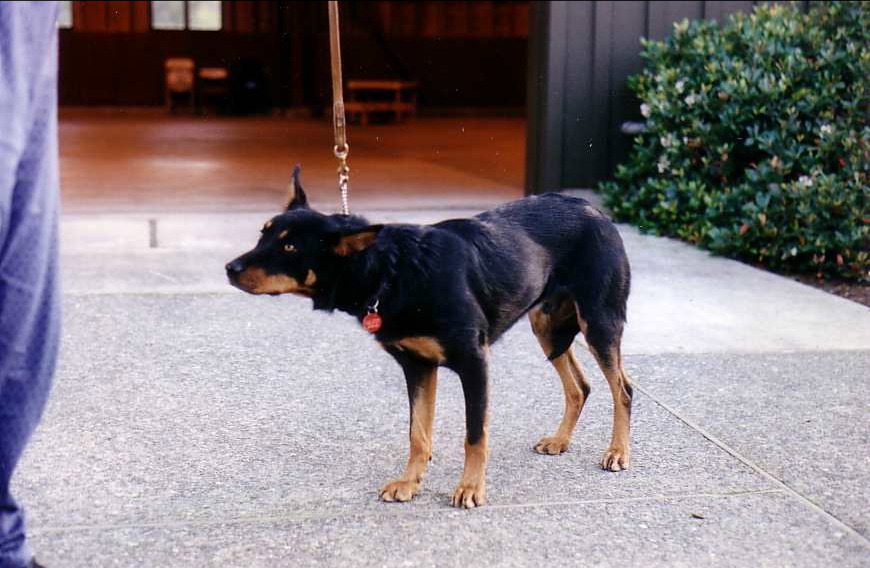 What emotion would you attribute to this dog, if any?

I believe completely and without question that dogs can experience anger, the biology to support that is overwhelming. However.. and this is a big HOWEVER… I also think that anger is one of the emotions that people most misunderstand in dogs. Owners often tell trainers or behaviorists that their dog defecated on the carpet because he was “angry” that he’d been left, when the motivating emotions was either fear of being left alone, or none in particular, because the dog simply wasn’t house trained.  I would argue that although dogs can get angry, (for example when frustrated by being pulled away from the window while barking at a passer by), dogs actually experience anger very very little compared to humans.

Let me add something to that last line, that dogs “experience anger very very little compared to humans.” It’s frankly a miracle to me that dogs aren’t more angry than they are. Get a bunch of trainers, vets and behaviorists together with some bottles of wine, and you’ll hear expressions of shock that our dogs haven’t killed and eaten us yet. It’s hard to believe what they put up with from us. Their benevolence may, in part, relate to the discovery that dogs have genetic mutations similar to humans with Williams-Beuren Syndrome, resulting in “hyper-sociability” and exceedingly high levels of trust. This in contrast to the look of pure rage in the eyes of a wolf hybrid right before he sunk his teeth into my hand. I’ve seen plenty of dogs go “hard-eyed,” but I’ve never seen that level of fury in the eyes of a dog. But that doesn’t mean that all dogs are hyper-social, or that dogs can’t experience anger. 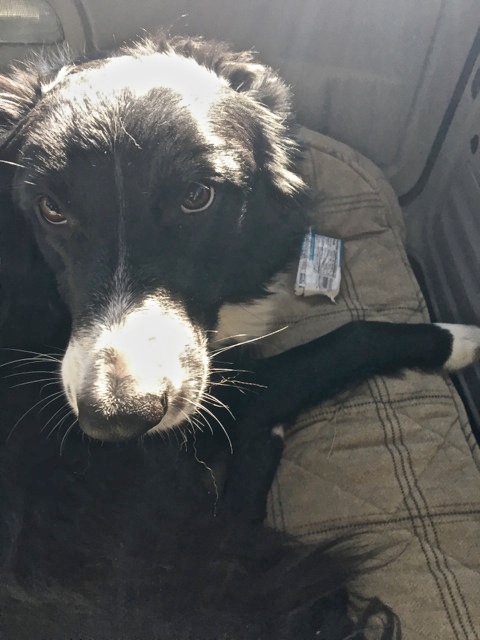 This is Sam. He is not happy to be in the back seat of the car, thank you very much. (Thank you Roberta K. for letting me use this photo!)

It seems like a good time to bring this conversation back, especially given how anger seems to be one of the prominent emotions in our own species right now. My questions to you are: What do you think about anger in dogs? Possible? Agree or not that it’s possible in dogs but less likely (waaaay less likely) than in humans? If you think you’ve seen anger in dogs, tell us what happened, and what makes you think so. If you think dogs can’t get angry, tell us why. I’m all ears, and I promise not to get angry at any responses, no matter what they are.

MEANWHILE, back on the farm: I’m way way waaaaay behind in gardening because 1) I’ve created a set of gardens designed for a staff of five, and 2) I spent two and a half days at a sheepdog clinic with Scott Glen at Big Yellow Boots farm, and my mind is still buzzing. To say that I’m a tad obsessed with training my dogs and working in the garden would be an understatement, perhaps illustrated by last night’s uber simple dinner–grilled cheese and tomato soup. (Although I should add that a good grilled cheese sandwich and bowl of tomato soup is a damn good dinner.)

Here’s my favorite photo from the clinic: This is me doing a total celebrity fan geek out because I got my photo taken with the most skilled and accomplished dog of the decade, Scott and Jen Glen’s Alice. Alice has won just about everything in the sheepdog world, including both The Nationals and The Bluegrass twice. (The Bluegrass is a bit like the Masters, if you’re into golf.) Her brilliance on impossible sheep never fails to astound me, and so it made my day to get a chance to meet her. Thanks Jenny! 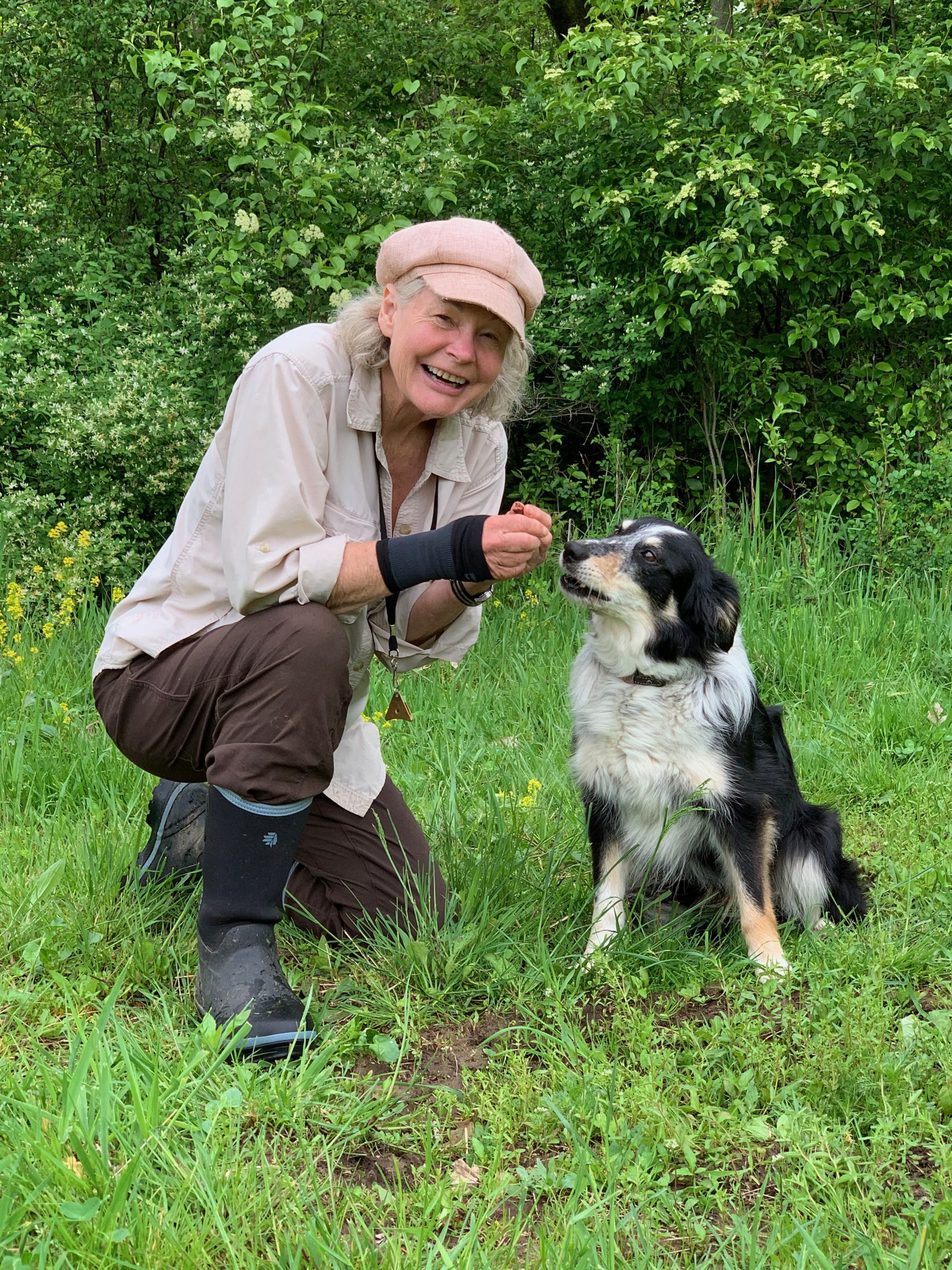 Skip got to meet her too, after emerging from the cooling tank after his lesson. Skip was more impressed than Alice, but neither was as ridiculously thrilled as I was. 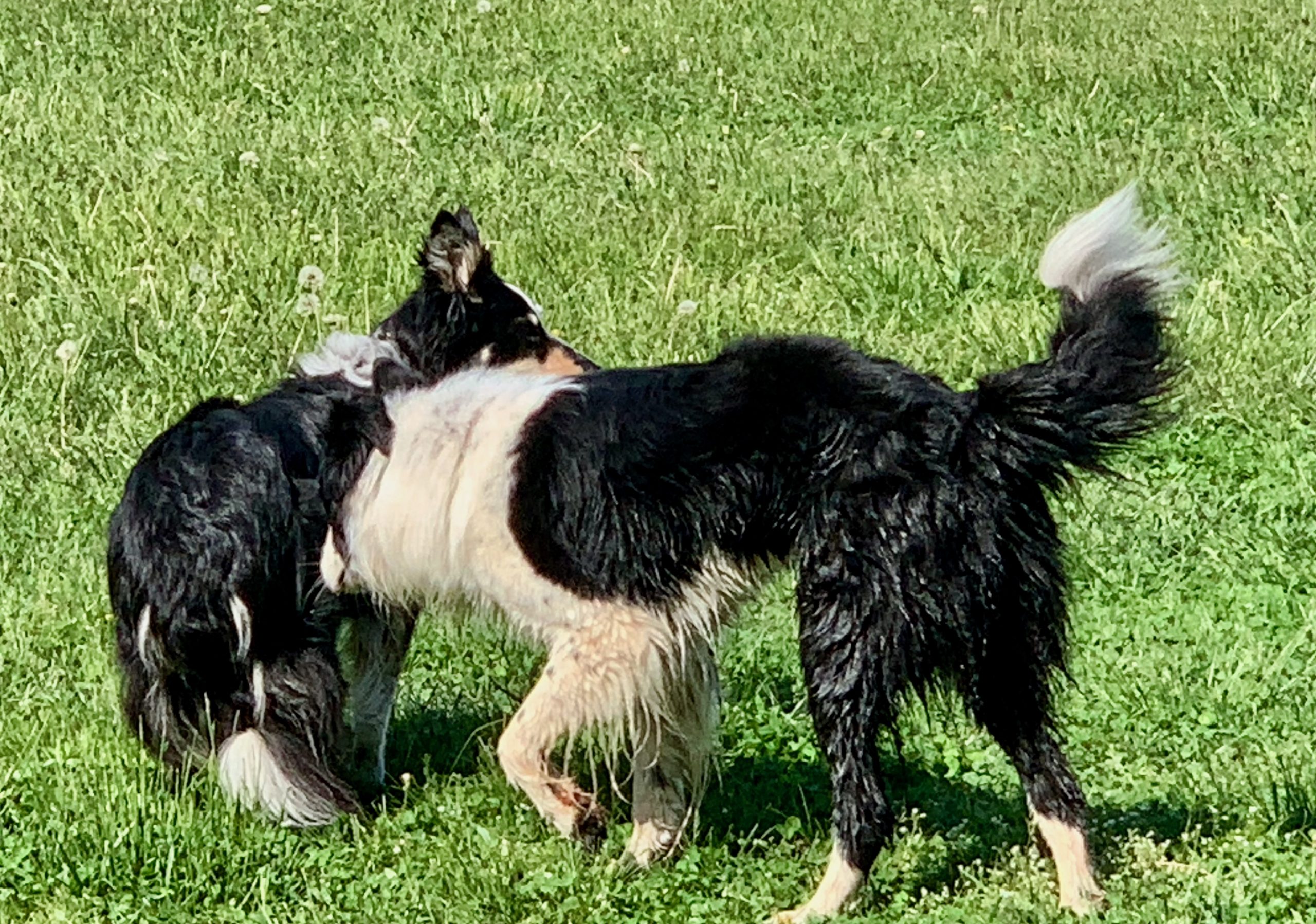 Ah life. So complicated sometimes. See that beautiful field of purple flowers? Gorgeous, right? But/And, it’s Dame’s Rocket, an invasive species that takes over and dominates everything. We had a bit of it before, but after having the wild area behind the house cleared of other invasives, (mostly Honeysuckle and Garlic mustard), the Dame Rocket said “Thank You” and came up like an invading army of fairy warriors. Beautiful, but will literally take over all of my perennial gardens if I don’t work hard to contain it. I can’t bring myself to spray it with herbicide (you’d practically have to hire a helicopter), so I’m pulling it up close to the garden, and chopping off as much as I can before it seeds to discourage it. There will be many, many hours of Trisha bending over chopping off the tops of these hundreds and hundreds of plants before they go to seed. Please send a massage therapist. (What you’re seeing is just the small section. Most is on the left. Sigh.) 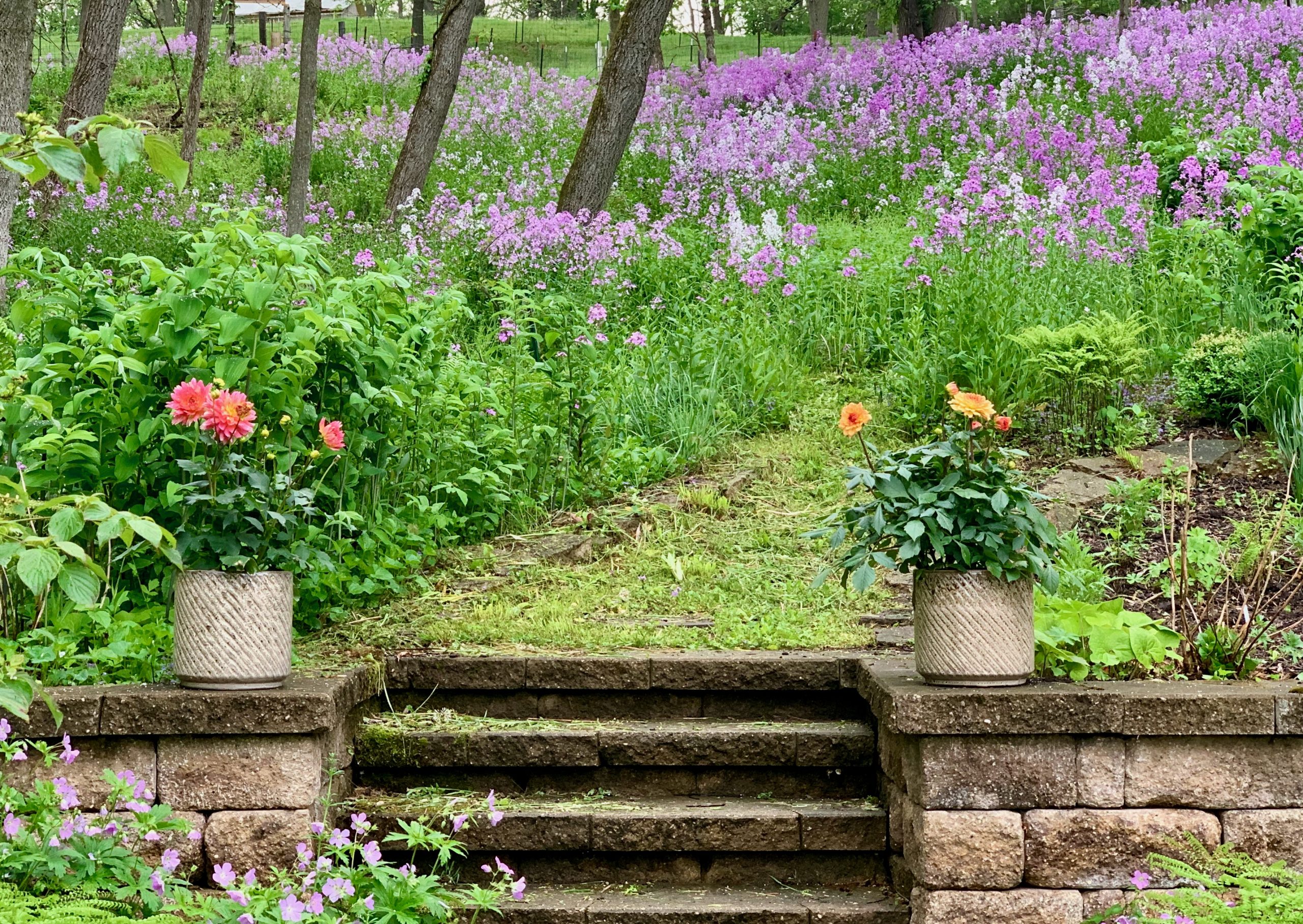 It got crazy hot for May (was 24 F just what, two weeks ago?), and the kitties went back to their favorite napping bed, the Katris Nest, from last summer. I think the way it’s constructed makes it extra cool and comfy when it’s hot. Maybe they should make one for people? 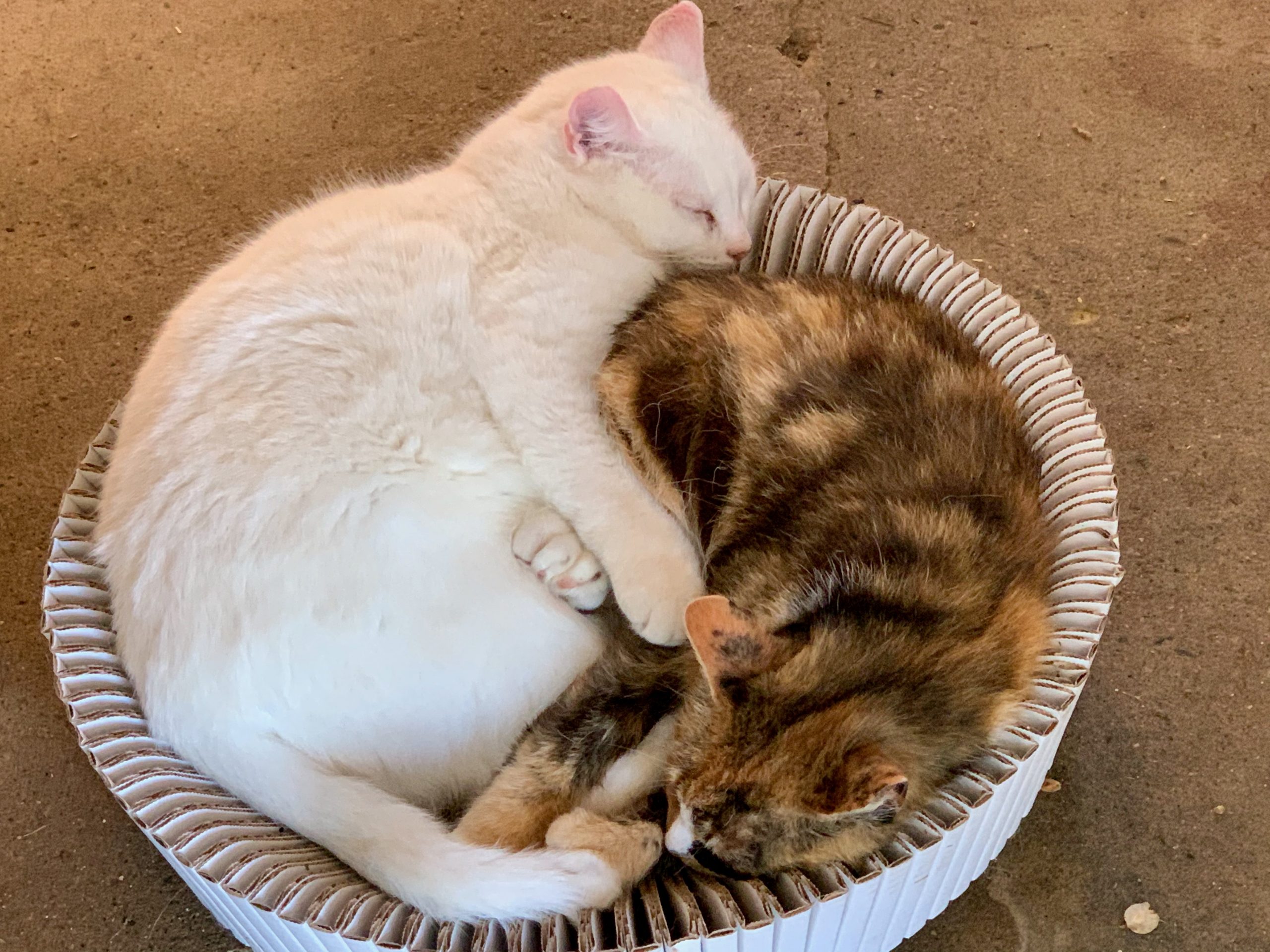