Welcome to an ongoing inquiry about the behavior of people and dogs.
Blog Home >> Animals and the People Who Love Them >> Great Photo of “Hard Eye,” & What to Do When You See It 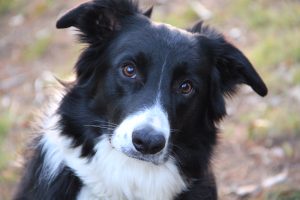 Meet Sam. He’s a 41/2 year old Border Collie, adopted by Roberta K from a shelter in rural Virginia at the age of one. He’d spent his first year of life in a crate. It seems the elderly couple who purchased him, one wheelchair bound,  found him “too much to handle.” (A pause here for us all to take a breath and remind ourselves about the value of compassion, versus our shared and understandable desire to shriek and rip our hair out by the roots.)

Sam was rejected by a number of potential owners after they came to meet the dog attached to the beautiful face they’d seen on Facebook. Something about him leaping repeatedly 10 feet into the air and lunging, teeth bared, at all visitors seemed to have put them off. Not Roberta, surely a true heroine, who knew that Sam desperately needed to get out of there, and felt that her past experience with other rescued Border Collie might give him a chance.  She also had another BC at home, Sophie, who needed a playmate, and was grieving over the death of her buddy, another BC who died unexpectedly.

Sam went home with Roberta, and clearly his luck finally changed. From what I can tell, he ended up in the perfect home. He and Sophie became fast friends. Roberta saw early on that Sam is the kind of challenging dog that I call an “alpha wannabee.” In other words, Sam is a dog who appears to need to be in control (insert “D” word here if comfortable with it. Otherwise, forget I said anything…), but who is a puddle of fear deep inside. I always remember President Richard Nixon (does anyone else remember him?), who radiated a deep desire to be in charge, along with none of the personality or skills that could make that happen easily.) Roberta initiated a “no force” policy (see why I love her?), and used positive methods to teach Sam to be polite. No staring into his eyes by her children is allowed, but lots of play and the benevolent use of positive reinforcement to Sam that he can get what he wants by listening, not by biting. 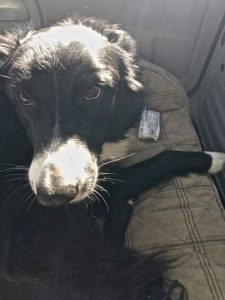 Fast forward to now: Here’s the photo that Roberta sent a few weeks ago. This is Sam guarding a candy bar he had snatched. I was happy to receive the photo, because images of what is often called a “hard eye” are difficult to find. I wrote a blog in July of 2015 titled What is a Hard Eye? in which I discussed what to do when you see one (bottom line: change what you are doing), but I couldn’t find a good photo of “the look” to accompany it.

But here it is in all it’s heart-stopping splendor; the look says that “Make My Day” without a word spoken. There’s  more here than that–look carefully at Sam’s muzzle. See how it’s puffed out on the sides? That’s in indication of what I call an offensive pucker. “Offensive” because it tells us that the dog is on offense, not defense.

The great news here is that Roberta’s response was wise and effective. Sam was in her car, but he wasn’t gobbling up the candy bar (which might have been very bad for him). Rather than attempting to use force to get the candy bar away from Sam, she relied on the training she’d done, and sang out “Leave It” as she drove home, interspersed with “telling him stories about playing ball and frisbee.” (She tells me it was only a 5 minute drive.) What a smart response on her part. Force is that last thing I’d try in this case. (Come to think of it, force is that last thing I’d try in any context, at any time.) What worked for Roberta was changing Sam’s emotional state from the primal state of “under attack and willing to fight to the death” to one eased by the repetition of a trained cue, and her light-hearted story telling.

Because that’s what one needs to do when you get a look like this: Change what you are doing, by changing your behavior into something that relaxes or jollies up your dog. While working with dogs whose faces went to the dark side, I’ve done the following:

Began laughing and saying something like “Oh, you silly boy! What’s the matter? Having a bad day?”

Turned away, gone to get a toy or a treat and began playing with it (toy) or tossing it in the air or on the ground (treat).

Those have been my most common responses, but I suspect there have been more. Most important is to use your knowledge of the dog and what he or she knows. Roberta was wise to chant “Leave It” over and over as she drove home, along with using tone of voice and words associated with play to defuse the tension. That’s the game, in my opinion, to defuse the tension. I know some will argue that such a challenge should be met with force, and that anything else is teaching the dog to win by being aggressive. I strongly disagree. Dogs in this state are emotionally overwhelmed, and nothing good is going to happen if they perceive themselves as being attacked.

Sam and Roberta’s story ended well. He sat by the candy bar all the way home, but didn’t touch it. When they arrived home, Roberta opened the car door and Sam jumped out, leaving the candy bar behind him. Roberta gives lots of credit to her dog training guru Beth Ann Sabo for emphasizing the importance of the Leave It cue. I say HERE HERE to both of them, for avoiding what I guarantee you could have been a very nasty incident.

What about you? Have you encountered The Look or a Hard Eye before? I ran into one person who told me she thought she’d never seen it until she read my post about it in 2015, and realized that her family dog’s eyes went cold and hard right before it lunged for them. Most importantly, what do you do if you see it? I’m all eyes.

MEANWHILE, back on the farm. Brrrr. Nippy. Below zero several mornings, with highs in the single digits, which wouldn’t be bad if it wasn’t for the wind. But it’s gloriously sunny, which is such a joy. Our time outside is restricted to feeding the sheep, canine potty breaks and twice daily fetching sessions with Willie and Maggie. (Maggie fetches a thrown disc, while Willie runs after her with another toy in his mouth. We have to avoid Willie impacting his shoulder joints, so no more real fetching for him. Lucky for us all, he seems fine with this arrangement.)

We’ve spent a lot of time inside these last few days. I’ve obsessed over my winter garden, with spring flowers and amarylis starting to bloom. Thank you White Flower Farm, what would I do without you? And yes, someday I will take down my little Christmas men, but I am quite fond of them and every year I delay packing them up back to the attic.) Here is the “garden” on Friday, with the patchy snow in the background. (It was about 5 degrees F outside at that moment.) 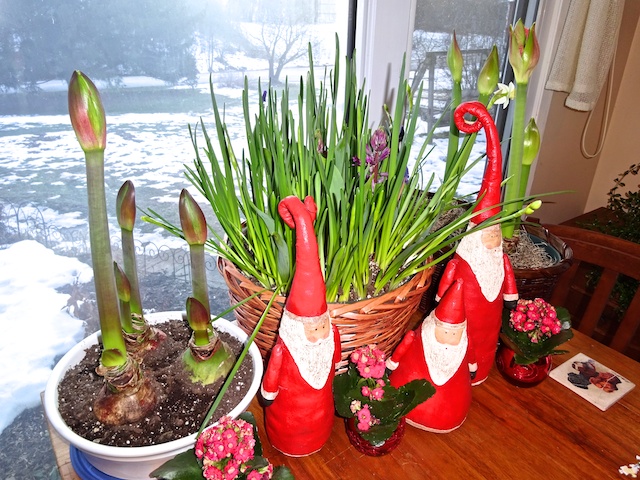 Here it is this morning, with the spring flower basket brimming with color and the amaryllis on the right beginning to open. I obsess over them all multiple times a day. Yes, the “gardens” were expensive, but worth every penny to me. I just feel grateful and lucky that I could afford then at this point in my life. 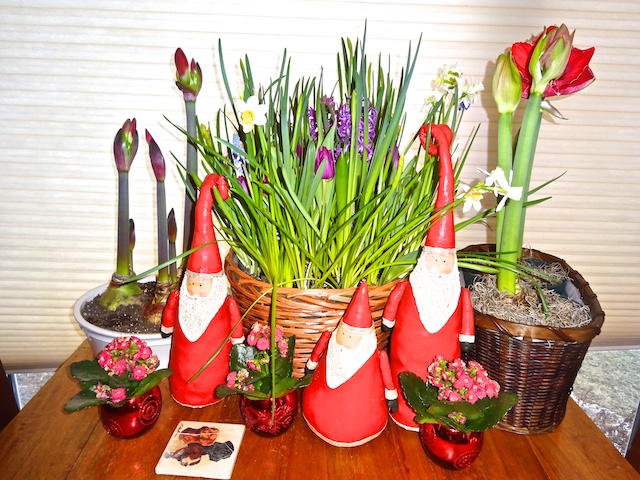 Here’s what else we’ve done: 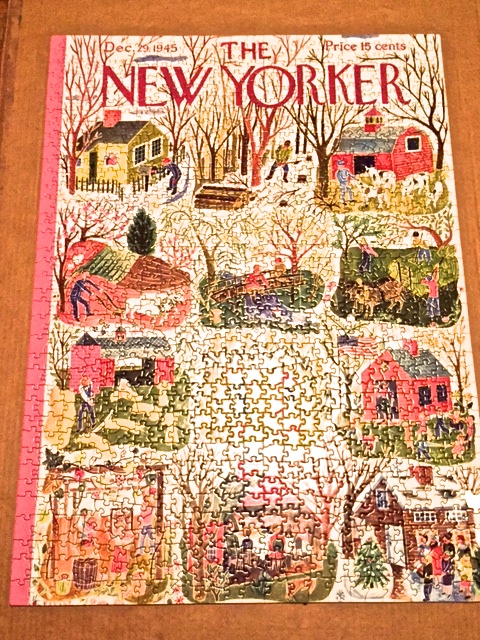 Now all I have to do is teach Willie, Maggie and Tootsie to do jigsaw puzzles with us. Tootsie’s only interest at the moment is attempting to ingest puzzle pieces that fall off the table. The BCs lie down at our feet and sigh noisily when we work on the puzzle. We can see speech bubbles over their heads that say BORING.

Here’s hoping the weather moderates a bit. Meanwhile, stay warm (or cool, depending on which side of the globe you’re on!)

« Barn Swallows: Excerpt from The Education of Will
Visits from former owners: Good for Dogs? »