Welcome to an ongoing inquiry about the behavior of people and dogs.
Blog Home >> Animals and the People Who Love Them >> Dogs, Dog Food and Dogma: A Review

Would keeping your dog thin decrease his or her chance of dying from cancer? The author of this book says yes, in a set of arguments that correlates obesity and risk of mortality in Dogs, Dog Food and Dogma. I’ll summarize now by saying that the author Daniel Scholof is a good researcher and writer, and makes a compelling case for keeping our dogs thin. I’ll also remind all of us not to oversimplify the connection between fat and cancer, and add some thoughtful comments from canine nutritionist, Linda Case.

I should start by saying that something usually happens, and not in a good way, when I begin reading about canine nutrition. Once we start talking about kcals and the specific amount of protein/vitamins/minerals required in home diets, I want to write MEGO in the margin. (MEGO is editor speak for “My Eyes Glaze Over.” Of course I think nutrition is important, see for example my rave review of Dog Food Logic by Linda Case, and I think long and hard about what I feed my dogs. But it’s a rare book on nutrition that keeps my attention for long. 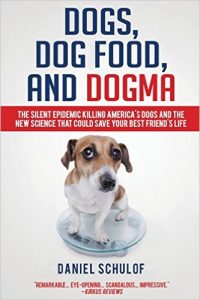 That is why I was pleasantly surprised by the book Dogs, Dog Food and Dogma: The Silent  Epidemic Killing America’s Dogs and the New Science that Could Save Your Best Friend’s Life, by Daniel Scholof. When I received it I placed it in the pile of “books I am requested to read and write blurbs for,” which can admittedly be a place where good books (or not) sometimes go to die. But one day I flipped open the cover with the intent of skimming the beginning. Three days and 249 pages later, I finished what is highly readable and interesting book, although I’d advise reading it with some important cautions.

First, it’s helpful to know that the author is an “ultimate marathon runner,” a fact I find both impressive and intimidating. I suspect you’d have to look hard to find an ounce of fat on him (she said, sucking in her stomach). And fat IS the issue here, and the reason that Scholof argues our often-overweight dogs are dying at such high rates of cancer and other often fatal diseases.

First off, there is no question that a large percentage of American dogs are overweight. Dr. Edward Ward (the founder of the Association for Pet Obesity Prevention) says that over 50% of dogs in the U.S. are overweight. And being overweight is probably as unhealthy for dogs as it is for people. DDD (my abbreviation for Dogs, Dog Food and Dogma) supports this information with a prodigious amount of research, and makes the compelling case, that in humans, fat is deposited in our bodies not just because of the old “calories in/calories out” equation. Many now argue that eating high “glycemic index” foods like corn, wheat, potatoes and white rice, causes fat cells to expand because of the rush of carbohydrates that they create in the blood stream. These are common ingredients in many commercial dog foods, and the author makes the case that it’s not so much lack of exercise that is making our dogs fat, it’s what we are feeding them. Of course, canine and human metabolism isn’t exactly the same, and we don’t yet have much research on how these foods are metabolized in dogs (as Linda Case reminds us), but it seems reasonable to speculate that high glycemic foods might have the same effect on dogs. 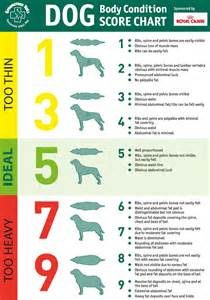 One of the most interesting sections of the book is the section on Body Condition Scoring (BCS), in which Scholof argues that many healthy dogs as “too thin” are actually at a healthy weight. The image on the right illustrates the 9 point scoring system developed by Dr. Dottie Laflamme and is one of the most commonly used scores. Research using a new body scanning technology has shown that there is indeed a correlation between a dog’s score on this chart and the percentage of body fat found. However, Scholof cautions us that the picture is far more complicated. In a reverse of BMI scores categorizing healthy, muscular people as overweight, BCS rankings score healthy athletic dogs with little fat but a lot of muscle as “too thin.” If you’ve done the scoring on your own dogs (one of the benefits of the test is that it’s easy to do), you’ll see that there’s no evaluation of your dog’s musculature, just how much fat covers his or her ribs, hips, etc. My working Border Collie Maggie, with her impressive mass of shoulder and thigh muscles, would without question fall into the “Too Thin” or “Under Ideal” category. But I’d argue that she is actually at exactly the right weight and condition for a working sheepdog.

Scholof agrees, and makes the case that we need to be looking at the ratio of fat to muscle, with an emphasis on “healthy” being defined as having lower amounts of fat in the body than what has historically been considered ideal. I ran this by Linda Case, and she agreed that muscle mass must be taken into account. However, she added the essential point that most dog owners in the U.S. don’t own working athletes, and aren’t going to add extreme physical conditioning to their dog’s daily routine. In addition, “losing weight” isn’t just a matter of losing fat–weight loss usually involves losing both fat and muscle, so extra efforts need to be made to increase muscle mass if also trying to lose fat. Perhaps more importantly, Linda mentioned that only about five percent of veterinarians talk to their client about their dog’s weight. A sad statistic indeed, because there seems to be consensus in the world of veterinary medicine and canine nutrition that being overweight is truly, truly bad for our dogs.

What’s more controversial is exactly what the effects of being overweight are and its relationship to cancer. We know that being overweight in people is a risk factor for cancer, but that is not the same thing as being a causal factor. We can’t say that “being overweight causes cancer.” For one thing, “cancer” is a huge category that includes a vast array of actual diseases. Secondly, there are numerous risk factors that can be causing the high rates of cancer in our dogs. As Dr. Case said to me, “our dogs live in a chemical soup” that includes pesticides, herbicides and who knows what else. That leads to my only criticism of DDD, which is that it focuses exclusively on fat as THE problem related to our dog’s health, and not on all the other factors, including environmental influences like herbicides and other chemicals like BPA in canned dog food. Not to mention the known influence of genetic risk factors. Given that researchers seem to agree that cancer is usually caused by a set of factors (genetic predisposition plus environmental factors for example), we have to be careful about simple correlations between diet and cancer.

I mentioned this to Daniel Scholof when we talked this morning, and he said “Fair point.” He added that he would have included that if this was a book about cancer in dogs. But it’s not, it’s a book about obesity in dogs, how it happens and the importance of educating dog owners that their “average looking” dog might have its health compromised by carrying too much body fat. To which I say, “fair point.”

There’s so much more, but I think it’s best now to let the book itself to the talking. This is a valuable book, but I make that recommendation with the concern that people will read it and conclude that keeping their dog thin will prevent him or her from dying of cancer. It might decrease the odds, but its no guarantee. We all wish we could put our dogs on diets and ensure their long life, but there is no one way to keep our dogs healthy, no matter how much we wish it was true.

If you want to learn more about canine nutrition, I’d also recommend Linda Case’s book, Dog Food Logic, and her blog The Science Dog. I’m also going to check out Daniel’s blog, The Optimal Dog. A sincere thank you to both Linda and Daniel for taking the time to talk this morning. I hope we can continue the conversations. I’d love to continue the conversation with you, dear reader–jump into the comment section and tell us what sources you have found to be interesting or helpful related to what you feed, or don’t feed, to your dog.

One last comment: Just try not to fall in love with Daniel’s dog Cody. I dare you.

MEANWHILE, back on the farm: Good news! Lady Godiva and her lamb “Snow White” tested negative for Caseous, which means Lady Godiva and her lamb might be able to stay on the farm. Whew. We are still fighting the disease, which is still evident in Lady G’s other two lambs, and we have to send in a second test to Washington State University (who has been wonderfully generous with their time), but at least the first test looks good for both Lady G and her ewe lamb. Yay for good news! I’ll keep you posted when the second test comes in.

That’s Lady Godiva in the middle, with her ewe lamb Snow White to the left.  Hopefully they will be on the farm for a long time to come. 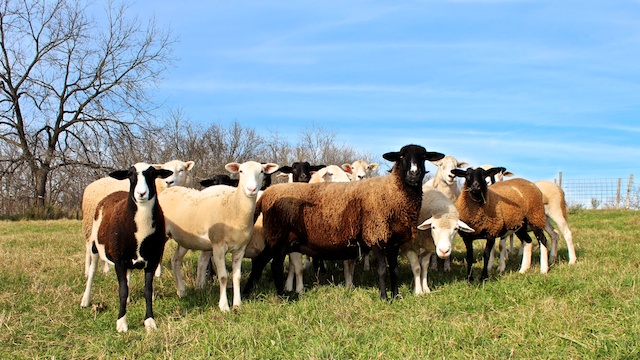