Welcome to an ongoing inquiry about the behavior of people and dogs.
Blog Home >> Animals and the People Who Love Them >> Let The Fetch Games Begin. Or Not?

Willie and Maggie usually play tug games every morning before I begin working, but Willie had a tooth removed, so he is working on some new tricks. Maggie needs to stay in good condition and needs to run hard, at least twice a day, so we are playing fetch together in the morning. 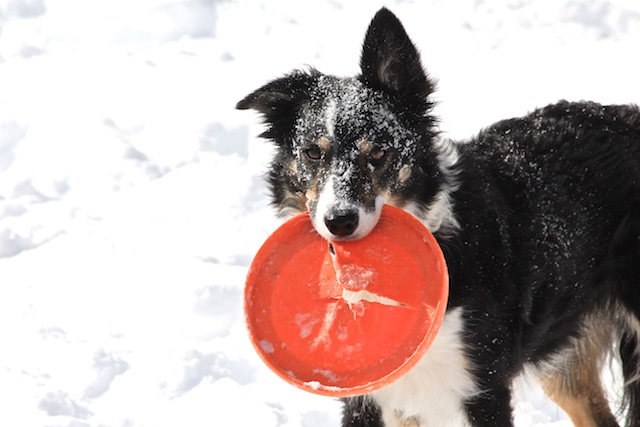 After just a few morning of this, I noticed that Maggie began jaw chattering as I got my boots on to go outside. It’s relatively subtle, but it’s new. What’s not subtle is her overall level of arousal while fetching. She ADORES doing it (that is her talking in caps) and when she brings the disc back she is so excited that she seems electrified. She squeak-barks, jaw chatters, and shoves the disc into my leg if I don’t pick it up fast enough. There’s nothing else that we do that gets her so excited. (Although she would drop the disc in a second if she saw sheep.)

That got me thinking about Clarissa von Reinhardt’s book, Chase!, in which she writes that fetch games release adrenaline, which acts to ready an animal for action. Under its influence, animals breathe faster, their heart rate increases, and glucose is released to prepare for immediate and extreme action. The plus side of adrenaline release is not just that it preps the body for action, it’s also enjoyable. (Watched the Winter Olympics this week?) But, von Reinhardt argues, it’s also a stress hormone, and can cause nervousness and hyperactivity. This is why she says: “..predatory games in which the dog becomes excessively fixated on, chases after, or becomes worked up by the object should be strictly limited. My preference is that they not be played at all.”

In May of 2010 I wrote a rave review of the book overall  (which is focused on training dogs to enjoy being off leash but still listen and respond to you) but disagreed with her comment above. However, after watching Maggie rev herself up like a teenager in a souped up car at a stop light, I went back to read the section again.

I think her argument brings up an excellent point: Playing fetch may be good physical exercise for many dogs, but it doesn’t necessarily act to calm them down. It can also teach them to run after moving objects–not always a good thing when one is walking in the woods. She recommends teaching dogs what I’d call “natural agility” (walk on a log), Find It games (which kept me and Willie sane when he was recovering from surgery), all types of nose work, and problem solving games. I’d add in trick training here, because learning tricks requires the kind of mental exercise that results in most dogs taking long naps afterward. And, of course, long, long off-leash walks in safe places. As you probably know, I think there’s little better for dogs than that, but you need safe places to do it, and dogs who always always listen to you and won’t dash off. (Thus, the value of Chase! As I said in my blurb on the back cover, “… the idea of a “sausage tree” is worth the price of the book.”

I don’t worry about negative behavioral consequences with Maggie, because 1) She will stop on a dime at a word from me, 2) She exhibits little interest in small animals outside, and 3) She’s more comfortable on defense while sheep herding (don’t run this way) than being on offense (go this way damn it).

My primary concern with Maggie and fetching after objects is the potential of injury. I suspect last year’s hind leg injury was from leaping up and catching a disc, so I throw low and use discs with holes in them. That way they don’t catch the air, and the disc lands before Maggie gets there. Fetch games help Maggie to stay in condition when it’s too snowy or icy to work sheep, but as soon as Willie is able, I’ll go back to the two of them playing tug games. That too is great exercise, and she seems to love playing tug without getting so overly aroused.

But discs with holes make for fun photographs. 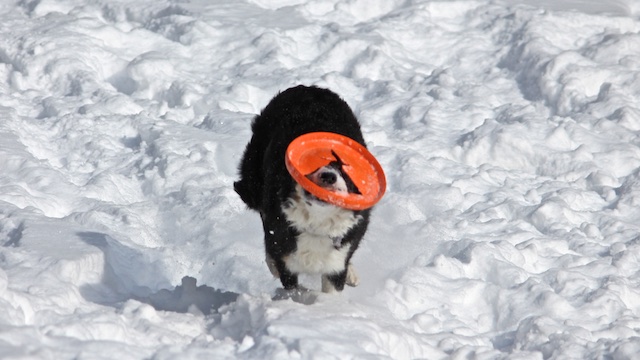 I’m curious about you and your dogs. Do you have a dog who gets aroused while playing fetch? Costs and Benefits from your experience? I think this topic is a good reminder that just because play can be fun doesn’t mean it’s not important. Karen London and I made that point in Play Together, Stay Together, because we both believe that play just doesn’t get the respect it deserves. I’d love to hear your thoughts.

MEANWHILE, back on the farm: Fun with snow continues, we’ve gotten another 6 inches or so and it’s gorgeous outside. Of all the dogs, Maggie seems to like snow best.  Willie’s behavior doesn’t change in snow or no snow. Tootsie’s feelings are clear–the less snow the better. We shovel paths for her because otherwise she’d pretty much disappear and she trots out where it is clear, goes potty and trots back inside, thank you very much.

Snow makes the world so much prettier, including creating such classy designs on the most plebeian of objects.