Welcome to an ongoing inquiry about the behavior of people and dogs.
Blog Home >> Dog Behavior >> More on Scent Marking in Dogs: Lisberg Study #2

Great comments about who goes when and where, keep it up. I love hearing from you. It is truly amazing how little we know about dog behavior, isn’t it? But here’s some more of Anneke’s results, this time from good-ole-fashioned, ethological studies observing animals in their natural environment–in this case, the dog park.

Dr. Lisberg observed olfactory investigation and urination at the entrance to a popular dog park, recording who urinated  when and where, and who did Ano-Genital investigation (AG), or sniffed each other’s butts. She found that males and females were equally likely to urinate immediately upon entering the park, but that males often urinated more frequently than females.  No surprise there. “Resident” males (dogs already there) counter marked (over or adjacent marked) more than females and also spent more time investigating the urine of dogs entering the park.

To me the most interesting result relates to Anneke’s observations on urine marking and Ano-Genital investigation. AG was done more by the residents than the individuals entering, and was done more by dogs with relaxed postures. However, there was no relation of sex or social status on AG rates.

Here’s the part I find most interesting: Entering dogs, as we all would predict, were often swamped by ‘residents’ doing AG investigation. We all know that this is a potentially tense situation for the entering dog…i.e, everyone wants to know everything about you, but they have to get their nose under your tail to find it out. Anneke found a strong tendency for dogs who were subjected to  AG investigation to trot a few feet away and urinate. The residents would then sniff the urine (rather than the dog) and the close contact would terminate. Dr. Lisberg has speculated that urine marking is a good way for dogs to convey social information to other dogs while breaking off the tension involved in the close body contact involved in AG investigation between strangers. Sort of chemical Facebook page that prevents too much intimacy too soon.

That makes me wonder about situations in which dogs are forced to greet one another without being given a chance to urinate (on sidewalks on leash, inside at doggy day care). We all know that many dogs seem to have no social problems when off leash, but are problematic on leash. There are many reasons for that, no doubt, and I talked about many of them in Feisty Fido. However, until Anneke’s results came out I hadn’t thought about the importance of dogs being able to communicate necessary social information through urine rather than encounters in which the dogs are forced into close contact.

So much to thing about… I am so glad that Anneke is at UW-Whitewater and is continuing her studies. Look for her sometime soon, I hope, speaking somewhere like APDT..

Meanwhile, right now it is Wisconsin at its worst. Rainy, muddy, icy, cold, damp, dark, brown… not much to enjoy outside except the  knowledge that this is the only road to spring.  Here’s Lassie and Willie after asked to “go pee” before I left home for the office to post this. This scene replicates itself on a daily basis, like clockwork: I say “Dogs, go pee. Willie goes and urinates while Lassie stands and watches him. As he leaves, she goes over and urinates, not always exactly on top, but where her nose is directly above his urine. (Does she think she is over marking exactly? Does she know her urine comes out a good foot behind her nose?! Does she care!?)

Willie is almost done, Lassie walks up toward him: 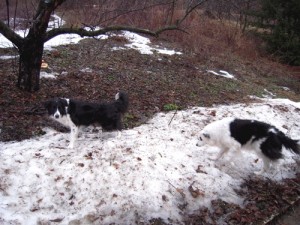 Not totally done yet, Lassie just has to wait: 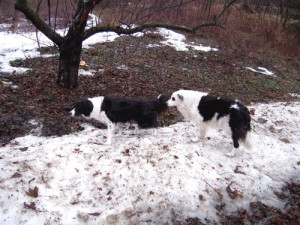 This time Lassie does seem to be going exactly on top of Willie’s urine. Maybe I need to watch more closely…. Hummm. 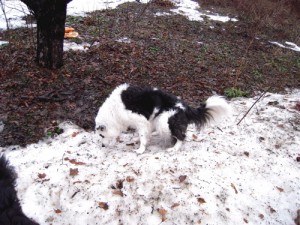 « Scent Marking in Dogs
Need Your Advice and Ideas! [Stay tuned for Podcast…] »