Welcome to an ongoing inquiry about the behavior of people and dogs.
Blog Home >> Lassie >> More Wackadoo Medicine for Dogs

I promised I’d write about the last alternative treatment that I use for my dogs: homeopathic medicine. I’m totally comfortable with someone calling this wackadoo and weirdo, because even I am not comfortable with the explanation given by proponents of the treatment. I’m fine with the first part, in which preparations are given that are believed to cause a diminished version of the very symptoms you are trying to treat. This is much like the vaccination principle in allopathic medicine, and I have no problem with it. It’s the second part that loses me, in which the preparation is so heavily diluted that in some cases, there are virtually no molecules left of the original substance. It was explained to me that it works because the energy field around the water molecules has been changed. Oh my. This is when I have to chant: “Just because we don’t understand the mechanism for something doesn’t mean it doesn’t work.”

I have not been impressed with any research into its efficacy, both of which have been done with acupuncture and chiropractic medicine. As a matter of fact, here’s an excerpt from Wikipedia:

“Claims of homeopathy’s efficacy (beyond the placebo effect) are unsupported by the collective weight of scientific and clinical evidence. Specific pharmacological effect with no active molecules is scientifically implausible and violates fundamental principles of science, including the law of mass action . . . The lack of convincing scientific evidence supporting homeopathy’s efficacy and its use of remedies lacking active ingredients have caused homeopathy to be described as pseudoscience and quackery.”

There’s only one problem here. It seems to work, at least for me and apparently, for some of my dogs. I have taken Arnica many times, including when I was badly bitten on the hand by a wolf-dog hybrid, who sunk his teeth into my hand up to his gums. It hurt like blazes, and as I continued talking with the owner my hand began to swell up. After the owner left, I called the guy I was dating and whined about the terrible bite I’d received. He was all over it: “Oh you poor thing!  I’ll take you out to dinner tonight to make it better.” After I hung up I took some Arnica. In half an hour the swelling had disappeared, and all you could see on my hand were 2 tiny slits that looked like paper cuts. When I met my date that night he laughed at me, saying “That’s the terrible bite you got! HA!” and preceded to tease me relentlessly about what a wuss I was. I actually said to a girlfriend that I should’ve skipped the Arnica and gotten the sympathy. (Let me be clear here.. my hand still hurt, and I still had 2 serious punctures in it. Arnica took care of the swelling, I believe, and decreased the pain, but in no way did taking it mean I didn’t have to attend to it very, very carefully with antibiotics and careful monitoring.)

I’ve used Arnica a lot when I badly scratched my eyeball, sprained an ankle and bruised various and sundry body parts. Here’s an example of using it on my dogs: As regular readers know, Lassie is 15 and a half, and has quite a bit of arthritis in her paws and forelegs.  A few months ago her forelegs began to turn salmon colored and I noticed she was licking them often. My vet and I agreed that her arthritis was getting more painful, and that the level of Tramadol and Chinese herbs she was on was not taking care of it. I increased her Chinese herbs, continued to get her acupuncture, but she still kept licking them. There’s no question that both of those treatments helped tremendously, if I take her off them she gets much worse, but I was unhappy watching her lick her paws so often, knowing that she was doing so because they hurt her. (I have arthritis in my hands too, and man can it hurt!) A CAAB asked if I’d ever tried Zeel, a homeopathic supplement made for arthritis by the same folks who make Traumeel (which I’ve used a lot successfully for sore muscles).

I figured it couldn’t hurt. If homeopathic substances are so diluted that they are barely there, how could they? However, I do think we need to be very careful about all health care. As I said earlier, if something has the power to do good, then it well might have the power to do harm. I never use any treatment without talking to a variety of people I trust, including my regular veterinarian. I also think some people are too quick to try “alternative medicine” because it sounds “natural” or somehow less intrusive than western medicine. Well, arsenic is natural, and it can kill you. But in addition, I think some people are too quick to use western medicine too, so this advice goes both ways. However, of all the “alternative treatments,” given the diluted nature of the medicine, it seems that if anything, homeopathic medicine may hurt your pocketbook, but it’s doubtful that it could physically hurt you or your animal if you use it as directed. (Note that I didn’t say impossible, just doubtful.)

Three weeks after starting Lassie on Zeel, her legs are white white white. She doesn’t lick them anymore, or not very often. Placebo effect? Did she see an ad? Read an article? Got me, but you can count on me to keep giving it to her. (Did I mention I’m taking it myself now? Are my hands better? Yes.  Placebo effect on me? Maybe…. but isn’t that 1) acceptable because it’s working? 2) better than something with serious side effects? and 2) isn’t the “placebo effect” a fascinating, important biological phenomenon? Why we would dismiss it, and not pursue it, if it is so powerful? (Could it be that it’s hard to get a patent on the power of belief?)

So, I want to be very clear here. As I biologist, I can tell you that the science behind homeopathic medicine is shaky. As a person who takes care of other animals, I’m really glad it’s around. I have Arnica in my desk drawer, in the cupboard at home, and never travel without it. (Speaking of travel, my next post will be about my last trip to Africa. I really, really hope you can come!)

Meanwhile, back at the farm: It rained buckets on Saturday, perfect for the farm because I had the pasture fertilized in anticipation of the rain. It was expected Friday night, but I woke up to clear skies and dry grass. I was sorely disappointed. The sheep can’t eat grass that has been sprayed with nitrogen until the rain washes it into the soil, and I really wanted the flock back on grass and off hay. Luckily, by mid morning it poured, and today the sheep are up in the hill pasture, gobbling fresh, emerald, green grass as fast as they can.

Here’s Willie on some green grass on the front lawn, hogging the spotlight as usual from Lassie behind him, both of them waiting for me to throw the frisbee. 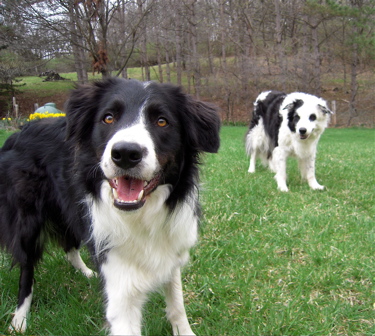 And here’s a welcome burst of spring color: 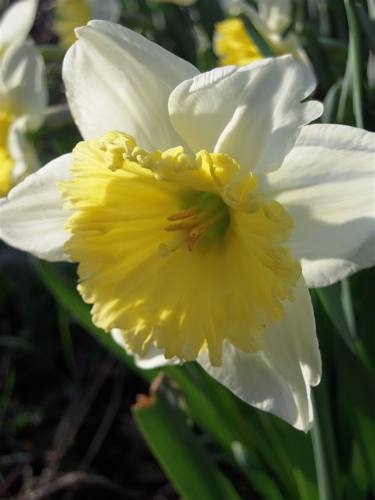 « Alternative Medicine for Dogs
Come to Africa with Me »