Welcome to an ongoing inquiry about the behavior of people and dogs.
Blog Home >> Animals and the People Who Love Them >> Music to a Cat’s Ears 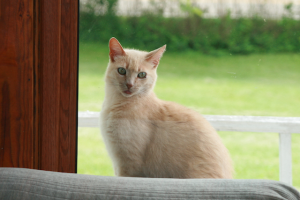 A recently published study has shown that cats are attracted to music that was specifically designed for them. This is important work, given all the claims that are made about effect of music “designed for” dogs and cats. Although there are several interesting studies this issue, the studies have traditionally compared different types of musical genres, always with music that was written for people (“classical” versus “rock” for example). There is some music that has been specifically designed for dogs or cats, but its development was not based on an analysis of the animal’s species-specific vocalizations, nor is there robust scientific evidence that it is effective. Indeed, see my post from 2013, in which researcher Kogan found that slow-noted classical music increased the amount of time that kenneled dogs spent sleeping, while “psychoacoustically designed” music, a piano piece specifically designed to calm dogs, resulted in no significant change in behavior compared to no music at all.

Enter scientists Charles Snowdon (a primatologist who has studied animal vocalizations for decades), and musician David Teie. Previously they collaborated on what they like to call “Cotton Top Rock,” or music designed based on the little monkey’s vocalizations and auditory range. They found that, as they suspected, the

monkey’s behavior was affected most by music based on their own calls and hearing range. For the current study, Snowdon and Teie enlisted the help of then- undergraduate student Megan Savage, and together they asked if they could create music that was particularly attractive to cats, based on feline vocalizations. Musician Teie created the music, while Snowdon and Savage designed and carried out the research. You can read the abstract here if you’d like.

In this study, forty-seven cats were tested in their own homes. Each heard the music specifically designed for cats and music written for people (balanced for direction, order, etc.). The music for cats turned out to be about two octaves higher than the music made for people, contained “sliding frequencies” often heard in cat vocalizations but not in human music, and a pulse rate related to purring. (Indeed, when you listen to some of the music you can hear purr-like notes in it. You can listen to the music here.) The cats oriented and approached the speakers significantly more often when the “cat music” was playing, and in some cases walked over to the speakers and rubbed against as they would to a familiar friend.

The authors conclude by making the compelling argument that “auditory enrichment” (for example, in 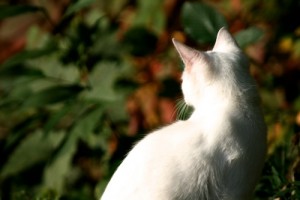 shelters, vet clinics, or for cats with separation anxiety) must be appropriate for the intended species and thus be based on an analysis of the animal’s own vocalizations. In addition,  one must be aware of the acoustic features that can affect the emotional state of the listener. (Long, continuous notes slow or soothe, while quick, repeated ones end to increase motor activity, true of all or at least most mammals.) They conclude: “It is not sufficient to simply turn on a radio or play some classical music in a laboratory or shelter and assume that acoustic enrichment needs are being met.”

I was especially interested in whether listening to the music tended to calm the cats who heard it. This, after all is what most shelters and owners of anxious cats need. The research scored the initial responses to the music in two categories APPROACH/ORIENT: Look toward, move toward the speaker, rub against the speaker, sniff the speaker and/or purr. AVOIDANT/FEARFUL behaviors included moving away, leaving the room, piloerection, growling, hissing or arching the back. There was no difference in the number of “negative” responses to human or cat music, but a large different in “positive behaviors.” If sleeping when the cats heard the cat music, they woke up. If active, they became calm.

Those findings are replicated in testimonials that have come in from people who have purchased the music from Dr. Teie’s website. Here are two:

I came across an article about the music you created specifically for
cats, which also featured an audio sample. I played this to our formerly
stray cat, who still after living with us for months is too afraid of
being petted. Upon listening to the music she seemed very relaxed all of
a sudden and was gently pawing at the phone, it was very touching to see. KL

My boys were yowling and carousing the other night, and i happened to come upon your sound file. Quieted them right down, and they ended up side by side on the couch! D

I talked to Dr. Snowdon about this study last week (Full disclosure: He is a friend and colleague, and was integral to my own PhD research), and he described to me, testimonials aside,  how important it was to him to keep a “wall” between any commercial applications of the cat music and the research itself. Snowdon & Savage have no connection to any commercial use of the music, and Teie had no input on the study design or analysis of results. Here! Here! to them all for keeping those things separate.

Another interesting result of this research is the response of some in the media about it. (Can you hear me pulling the hair out of my head?)  One reporter said “In what is surely the worst use of science in history, a Wisconsin psychologist has a mission to make mew-sic for cats.” Tempted as I am to say “In what is surely the worst use of a pun in journalistic history…”, but I’ll leave it that the speaker clearly had done little but read a headline and jumped on it like a cat on a laser pointer. My local paper covered the research, and later published a column deriding the University’s foolishness in releasing news about the study when the university is itself under fire from our governor and legislature. Ah, but if I was to criticize someone, it would be the media, for spluttering over the headline and not noticing that 1) the research was done by an Megan Savage, at the time an undergraduate who was getting credit for learning how to do research (knowledge that no doubt helped her get into a PhD program in clinical medicine, 2) the research was funded by a small $1,000 grant from a private organization, and thus no tax payer dollars were used, and 3) this results ARE important, in that it is important to find inexpensive and practical ways to soothe cats in shelters, in veterinary clinics and in homes in which they are stressed for any other reason.

Thus, my request to you all: Hold journalists accountable when they attack something without understanding what it is about. Science seems to be under attack at the moment in the United States, which is not good for anyone of us. We all need to stand up and push back when the media leaps onto something without doing any, uh, actual journalism about the issue.

For me, I’ll be playing it to Nellie and Polly myself out of pure curiosity; I would love to hear about your cat’s reactions if you have a cat at home.

MEANWHILE, back on the farm: We have a new flock of sheep. At least, it looks that way. They were shorn a few days ago in preparation for lambing (coming up in a few weeks! oh boy!), and not only do they look different to us, but because much of their scent is in their wool, they smell different to one another. I’ve learned to counter that by dousing them with cheap perfume, which cuts down on the aggression I used to see between them right after shearing. I find it fascinating that they don’t recognize each other once they are shorn. Fascinating too is a barn that smells like a whorehouse. I consider it a highlight of spring.

Here is part of the flock, gathered together not to keep warm (although it got below 12 degrees last night, poor things–they got lots of extra food to provide calories), but to stay away from my scary, big-eyed camera. By the way, the ewe on the front right, Chili, is 100% Katahdin and is a hair sheep. No need to shear her, she’ll shed like a dog all spring. 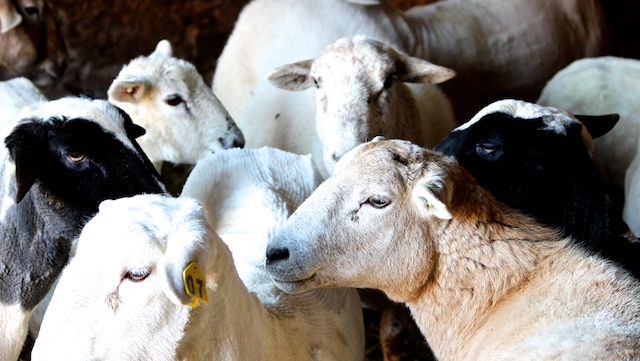 And now you know why Spot is named Spot. It’s never clear except right after she has been shorn. And then it is. Ba boom. 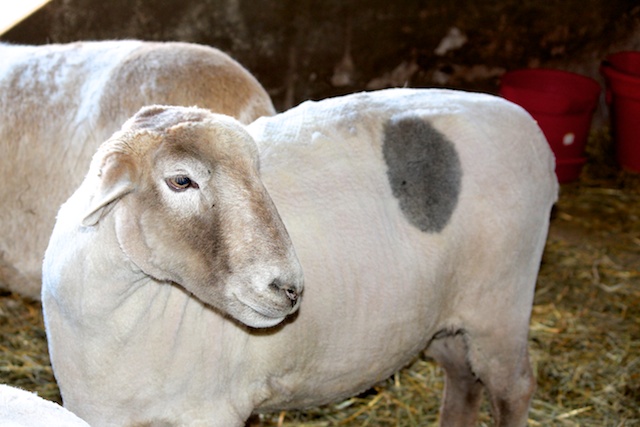