Welcome to an ongoing inquiry about the behavior of people and dogs.
Blog Home >> Animals and the People Who Love Them >> Ouch: The dangers of sticks as dog toys.

Last week I spent a few hours in a veterinary emergency clinic, providing emotional support for a friend whose dog had gashed his throat on a stick. He’s fine now, but it could have been much worse. One friend’s dog almost died after impaling his chest on a stick. It missed his heart by millimeters. I don’t write this to make anyone paranoid about playing fetch with their dog, but as a word of caution. I should say that I’ve tossed thousands of sticks to dogs in the past, and I still occasionally pull a stick out of the wood pile for Willie to run around with. People have been throwing sticks for dogs to retrieve for eons. But then, people have been giving dogs cooked bones for decades too. (I remember a vacation in Jamaica during which the visiting Americans snatched cooked chicken bones away from the resident dog in horror, resulting in peals of laughter from the residents. They saw the chicken carcass as a feast for the dog, while we saw it as a potential for injury or death.) As we all know, cooked bones don’t always cause injury, BUT they can indeed badly injure dogs, and jagged sticks can injure dogs too. Here’s an article from the Daily Mail (British press) about the dangers of using sticks as toys, in which veterinarians beg their clients not to use them. We’re back to that probability statement we often talk about: What’s the chance this might injure my dog, and is the risk worth it?

It is not worth it to me, which is why I usually give Willie & Maggie substitutes for sticks that are safer. No, not always, I have to confess sometimes finding myself stickless and needing to put something in Willie’s  mouth to keep him from treating Maggie like a toy object, but I do most of the time, and at least significantly decrease the potential that one of them will be injured by a real stick. Here they were this morning, playing with their absolute favorite: 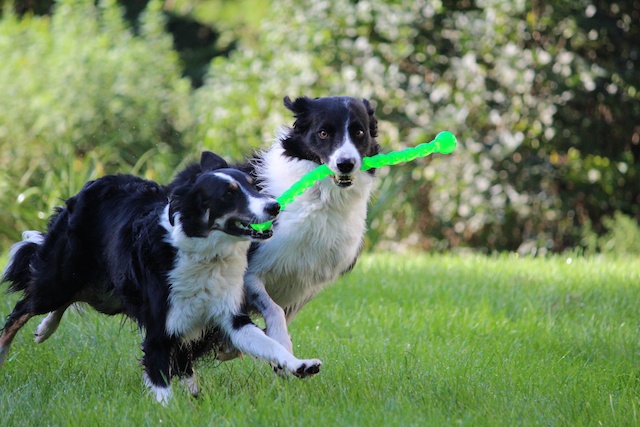 The toy is a Kong Safestix, and it is perfect for Willie and Maggie because Willie can run around with it by himself, or the two of them can play a tug game with it. Willie adores it, and I love it because 1) he adores it, 2) it is safer than a wooden stick, 3) it is long enough for tug games and short enough for one dog to play with, and 4) the colors are so bright it is almost impossible to lose, even in high grass. (It looks like I Photo Shopped the color of the Safestix, but I did nothing, it just seems to be lit from within all on its own.)

Another favorite at the farm is Ruff Dawg’s The Stick, which is thicker, shorter and a great toy to toss if your dog likes to fetch. Willie can’t do much of that because of his shoulder, but he loves to run around with The Stick in his mouth anyway.

What about you? Have you ever had problems with your dog being injured while playing with a stick? I have no idea how common it is and am curious to hear your experience. I’d love to hear if you have any safer substitutes you like to add to the list, and I’m sure Willie would be too.

MEANWHILE, back on the farm: Willie was in another sheepdog trial last Saturday. His first run wasn’t great but wasn’t awful. Perfect outrun and lift, a nice straight line to me on the fetch although we just missed going between the fetch gates, but then a sloppy, barely-made it drive, in which the sheep tried desperately to bolt to the exhaust pen while Willie worked and worked to get them back on line. Lots of dogs had trouble here, handlers were calling it the “Bermuda Triangle.” We finally did manage to get around the course, and got them in the pen with no trouble. But his second run was an entirely different matter. He did a perfect outrun and then stopped still behind the sheep, put his head up and looked at me. I whistled and called and whistled and called for what felt like an eternity, but he just stood there, immobile. Finally he followed the sheep, picked them up and began working well, but I called him off and retired after one old, wise ewe figured she had his number and bolted to the exhaust pen. I have to admit it was a low moment for me. I’d go into more detail but I’m still processing it. I love Willie so much, and he can be such a brilliant dog; it’s hard to see a dog you love struggle at something he can be so good at, not to mention to stand at the post while your dog stands stock still and doesn’t move. Ouch.

As best I can tell, Willie spent no time worrying about this yesterday or this morning, while working sheep at the farm or playing with Maggie. Here they are again, having a great time this morning: 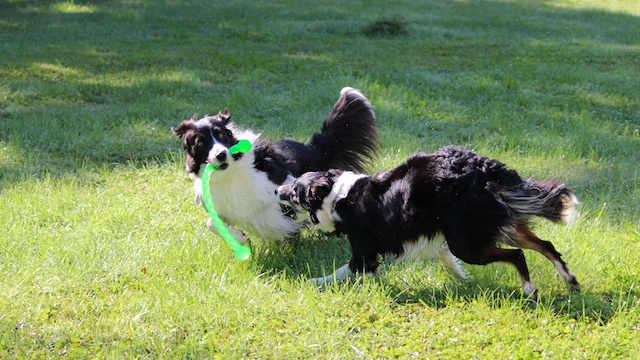 « Adopting Littermates… (Don’t)
Assistance Dogs International (Or does the “I” Stand for Inspiring?) »