Welcome to an ongoing inquiry about the behavior of people and dogs.
Blog Home >> Animals and the People Who Love Them >> Paying Attention, City Dogs versus Country Cousins

I just spent a few days in The Big Apple, and not surprisingly found myself watching dogs and their people on the sidewalks of New York City. Here are the two things that I noticed first: One, many of the dogs had on coats. Lots and lots of coats. Granted, it was a tad nippy on my first day because of the wind, but even when the wind died down and it was in the 30’s, many of the dogs were still in jackets. Not much to say about that, except it’s rare to see dogs in jackets here in Wisconsin, even in cities where the dogs live in apartments. Could this be as much about fashion as function? No idea. I’m curious to hear from those of you who live in cities. That said, this is a dog (seen at the dog park by the Museum of Natural History) who definitely need a coat! (Maybe one size smaller? If one could even find such a thing. This was truly a pocket pooch.) 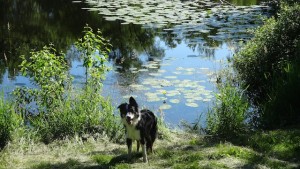 Second, very few people looked at their dog while they were walking. I didn’t think too much about that until I was walking my dogs on the farm, and realized that I almost never took my eyes off my dogs, even in a fenced area. There are several obvious reasons for that: All the dogs in the city were on leash and did not need to be “looked after” in the same sense that an off leash dog does—Is Maggi about to turn and chase a duck in the pond behind her? Is your dog, maybe Captain or Martha about to roll in fox poop?” Better pay attention!

But there’s another reason I watch my dogs so much. I love doing it. One of my greatest joys in life is watching my dogs as they move through the environment. Look how funny Maggie looks when she turns to look at me when she’s confused by a noise! Isn’t Tootsie adorable when her ears flap like Dumbo as she runs? I do take my dogs on leash walks too, but I still watch them constantly. However—important difference here?—I usually am walking in a suburban environment, not a busy urban setting. Or am I primed to watch them obsessively because Willie used to be so dog-dog aggressive? 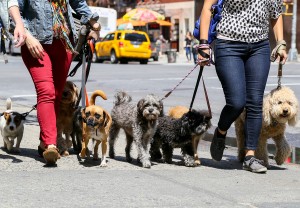 Here’s the essential question: Do people in the city look at their dogs less as they are walking than if in other environments? If so, why? I asked this very question of Melissa McCue-McGrath, a trainer in Boston and author of the book Considerations for the City Dog. Besides the obvious “dog on a leash already being ‘managed’ by the leash,” she suggested that the “no eye contact” unwritten rule in urban cultures might be at play. When she moved from Maine to Cleveland she realized that the standard “hello” or “head nod” made to passers-by in the country was out of place in the city. Too many people to acknowledge, and so much else to attend to—traffic, not bumping into someone else, Walk and Don’t Walk signals, etc. I too noticed when I walked in New York City that no one made any eye contact. It felt strange and rude to me. (But then, there’s that straw that I always feel must be in my hair when I arrive in New York…)

Melissa suggested that the urban “no eye contact” umwelt might also relate to people walking their dogs in the city. As in, “Don’t look at anybody.” Indeed, there is little time to: dog walkers are primarily paying attention to traffic signals and to “creating personal space” by walking with their eyes forward. Perhaps that explains the study of Italian researcher Mongillo and colleagues (2015), which looked at how much attention owners pay to city dogs with “problem behaviors.” (“Attention of dogs and owners in urban contexts: Public perception and problematic behaviors,” 2015). Bottom line? People who had dogs with what they defined as “problem behaviors,” including aggression to other dogs or people, did not attend to their dogs more than people with unproblematic dogs. Eeeps, that might be a problem, yes?

I asked two dog owners who live in the city, Melissa and friend and colleague Leslie Meredith, if they thought this lack of attention was a problem for the dogs. “Absolutely” was the answer: Both argued that owners miss critical signs of stress in their dogs that should be noted and attended to long before the dog begins barking or lunging at something that is scaring it. Leslie commented that she sees people walking their dogs while talking on their phones, all the while navigating busy streets and sidewalks. Eeeps, my mind begins to smoke thinking of all that stimulation.

On a related note, besides attention, what do city dogs need that suburban or country dogs don’t? First and foremost, of course, is a temperament that can handle the high level of stimulation that occurs in the city. I sympathize with dogs who, for whatever reason, simply can’t handle the hyper-stimulation of a big city. I’ve had far too many clients who adopted a dog adopted from the third world who is overwhelmed by an urban environment.

My conversation with Melissa about urban dogs led to a listing of the cues, in order of importance, that she thinks city dogs should master. Here they are:

Leave It (Trash all over the streets…)

Recall (If dog is off leash ever, or what if leash breaks?)

Paw/Shake (Because the paws of urban dogs get covered daily with salt, nasty stuff, etc, and need to have their paws wiped off on a daily basis.)

“Moving Attention” – Including the ability to heel on both sides of the owner (Broken glass on the left? Need to move dog to the right).

Melissa stresses to her clients, and I love this, that “heel” is for moving short distances only, not for long walks for exercise. I would add that heeling for long periods is actually extremely difficult—try it sometime. And besides, dogs can’t sniff when they are heeling (see earlier post).

I’d love to hear your list if you live, or have lived in a city. FYI, my my short list training hierarchy for dogs who are often off leash is:

I would love to hear your thoughts on this, I love getting feedback from people with dogs in different environments.

I’ll leave this topic (for now) by recommending Melissa’s book, Considerations for the City Dog. It has a lot of good information in it (“Smaller isn’t always city friendly”) and I love her perspective. Two other books about dogs in the city are The City Dog by Sarah Whitehead and Civilizing the City Dog by Pam Dennison (primarily about reactive dogs in an urban environment). I haven’t read them, let us know if you have and found them useful.

MEANWHILE, back on the farm. No snow here, and I am yearning for it. Little sun here too… it’s cloudy and grey and the ground is exhausting to walk on. All ice and ankle-breaking bumpy stuff that forces you to hunch over into a posture of abject misery in order not to fall down. I got so frustrated on Saturday that I left the dogs in the house and walked down the country road in front of my house just so that I could stop walking like an old woman carrying a load of wood on her back.

Still no chance to work sheep because of the footing (hooving?), but Willie and Maggie worked through a new set of Bison knuckles while Jim and I watched the Broncos beat the Patriots. (Smile. Sorry NE.) Maggie and Willie got to visit the local pet store for work on general cues like heel, wait, leave it. A gorgeous GSD showed up when Maggie and I were inside (my primary reason for going was to work on her reactivity to unfamiliar dogs). The GSD barked and lunged at Maggie, although from a good thirty feet away. Maggie stopped in a tense posture, but didn’t growl, and then looked back at me when I asked her to. Glory hallelujah, she began “auto watching” as I talk about in Feisty Fido, soon after. We played the “Where’s the dog?” game while the GSD was the perfect distance away at the cash register, and left feeling mutually proud of ourselves.

I struggled this weekend to find some good photographs in the cloudy, dull weather. Everything is just so, uh… blah.I know there are beautiful things to be found within all this, but this just wasn’t the weekend that I could find my inner artist. Here’s the best I could come up with, taken on the way home from our pet store excursion: 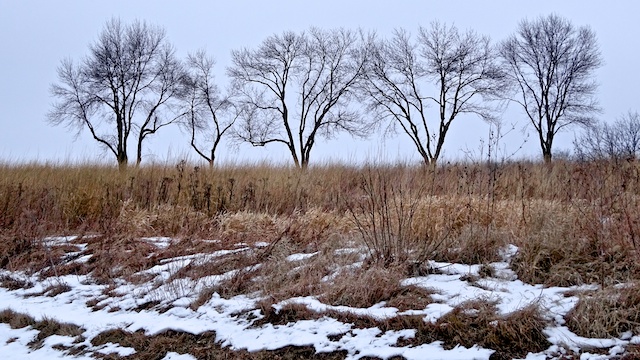 And here’s a scene from a drama I got to watch this morning. Every day there is a large flock of turkeys that feeds in a field between the farm and my office. I keep waiting for the sun to come out so that I can get a good picture, but the one time it was sunny this weekend I was in town. But this morning I stopped to try to get some photos, and was entertained by two turkeys having some kind of avian disagreement. Mating season is coming up soon, and I suspect that had a lot to do with one turkey harassing another. I sat and watched them for ten minutes, and one turkey never stopped harassing another, including running him (her?) out of the group by a good thirty yards as I drove away. (I played with the effects a bit in Aperature, the snow wasn’t really that blue. You can see how desperate I am for color!). The second turkey from the left was the target, you can see the one just to the right of  him with his beak open, lunging forward. 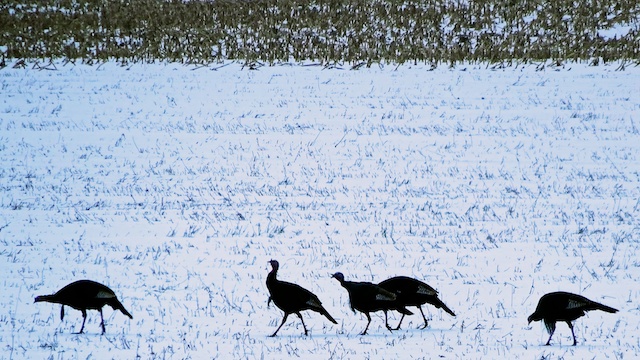 Here’s hoping that this week brings joy and color to your life! (And digging out from under if you are on the East Coast!)