Welcome to an ongoing inquiry about the behavior of people and dogs.
Blog Home >> Animals and the People Who Love Them >> Photos from Spain

Yup, well, Spain really IS wonderful. We first went to Barcelona, and wandered the narrow streets and alleys off La Rambla. La Rambla is a wide ‘market’ street full of touristy knick knacks and an infinite number of tourists to buy them. That sounds a bit harsh, but I’m just not a fan of crowded, noisy places, so take that with a grain of salt. But the small streets and open plazas around it were great fun. 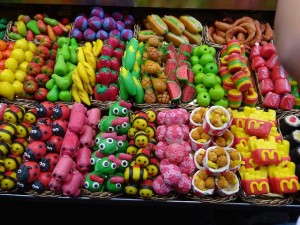 What was also wonderful was the food market on La Rambla. Admittedly, it too was crowded, but hey, it had food, which was not just tasty, it was gorgeous. This is all marzipan (I think…), but the market was full of fruit, meat (especially pork) and other delectable edibles.

Even better was a day trip to the Costa Brava, where we hiked five or six miles along the coast. It was gorgeous, and we even got to take a swim in the Mediterrean halfway through. Below the cliffs you can see some kayakers enjoying the perfect weather. 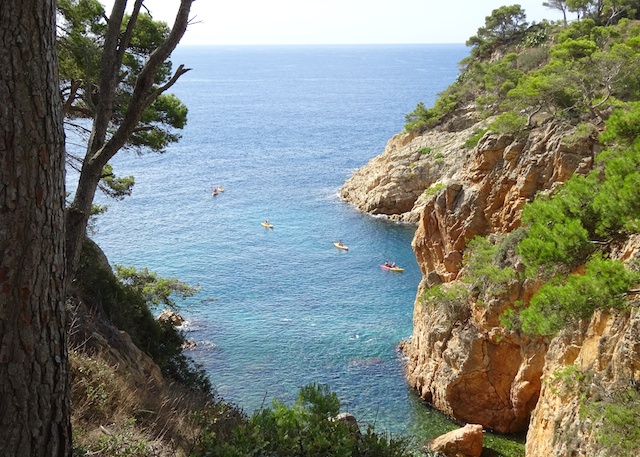 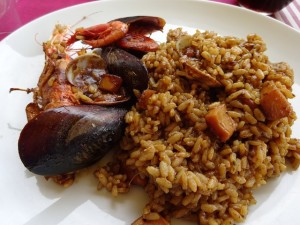 To top it off we were reinforced for our efforts (and they were substantial, lots of up and down on that hike!) with a seaside lunch in a cafe in the Palafrugel area. Seafood paella, yum.

And yes, we really did eat our way around Spain. The food is great, very hard to pass up. I expected great seafood, but who knew the Spanish can make pastries that taste like food for the gods? Lettuce salads for me for the next week.

Later in the week we took another day trip to the foothills of the Pyrenees, where we hiked up and up and up from the village of Rupit. The view was more than worth it. (Jim and I are shown here with new friends,  Sarah and David, who also signed up for this day trip with Spanish Trails Tour company. I highly recommend Spanish Trails, they created amazing days for us, not to mention ridiculously wonderful lunches!) Thank you Alex and Charles for fantastic days. And no, sigh, I didn’t see any Great Pyrenees. Next trip!

The next day we took the high speed train to Madrid. (300 kph at one point. Seriously.) There we met up with our hosts, Luis Souto Soubrier and Carlos Dangoor Florit with Dogalia publishing company. Luis 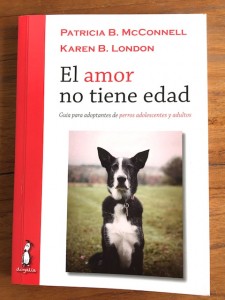 translated, and Dogalia published Love Has No Age Limit in Spanish, and I had the pleasure of talking two different times to dog lovers and professional trainers in Madrid. It truly was a joy… everyone was wonderful, and graciously put up with my attempts to speak a few sentences of Spanish .

Here’s the cover of the Spanish version. I wish I could show you some of the photos inside, they are great. I’m thrilled to have a third book translated into Spanish, thank you again, Luis and Carlos.

Here’s the group from Sunday. MUCHAS GRACIAS! You were delightful! 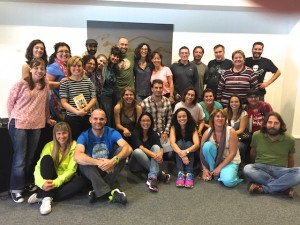 We also got some time to wander around Madrid, including a short visit to del Prado and the Royal Botanical Garden beside it. We only had time to view the paintings of Goya and Rubens, but they were so astounding I’m glad we didn’t look at more. I think my senses were more than full by that point.

The botanical garden was lovely, and full of monk parakeets (Myiopsitta monachus), the parrot version of the “English Sparrow,” in that the small parakeets (also known as quaker parrots) are considered to be pesty invasives. They originated in South American, but have spread over Europe and parts of the U.S. too. I know they don’t belong in Spain, but still, it was fun to watch them work over some fruit in the garden. 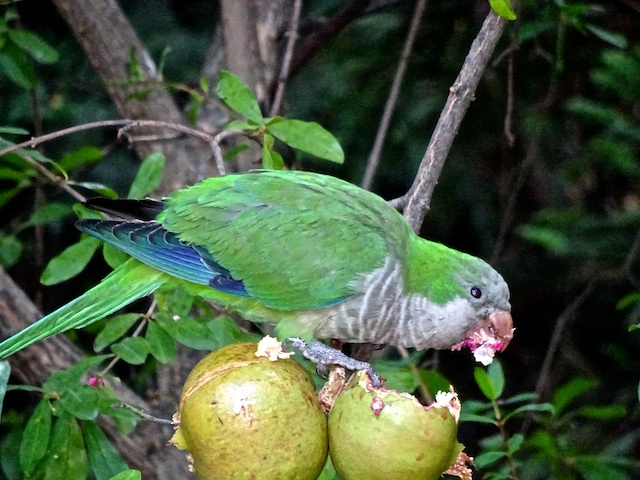 Now we’re home. As wonderful as it was in Spain, I have to say, after greeting the dogs last night in a explosion of joyful exuberance, Dorothy was right.  There’s no place like home.