First, thanks so much for your comments about the podcast, they are extremely helpful. Keep them coming, I’ll summarize what has come in at the end of next week (seems like one votes for one host or two hosts votes are about 50/50, same with whether the show could charge a fee or not….) I’ll keep you posted.

Here’s some more information from the IFAAB meetings in Tucson. There were two very interesting talks about breed recognition and breed-based behavior predictions. Victoria Voith, one of the first board certified veterinary behaviorists in the country, enrolled us in a study she is doing on breed identification. Given that breed bans are based on, well, breed identification, she and others are gathering breed identifications from a total of 1,000 people. We all took the survey, being shown about 25 or so photos of dogs, and were asked to identify the dog as a purebred or a mix. If we thought it was a mix, we were asked to identify the primary and (if relevant) secondary breeds contributing to the dog.

After we all took the ‘test,’ Dr. Voith told us the results of DNA testing from the MARS breed identification tests (more on that later). First of all, we were all relieved when we were done… our brains were starting to fry. (We had a limited amount of time to make our guesses and it was hard work!) I was glad when we were done, not just because it was getting tiring (and I don’t think I have ever been very good at breed ID!), but also because the results confirmed my world view.. always reinforcing when that happens, isn’t it? Most of the dogs shown came up as mixes of mixes: 25% this, 12.5 % that.Very few came out as 50% of one breed and 50% of another.

I’ve always wondered why people tend to describe mixed breed dogs as the offspring of two pure bred parents, and I’ve long believed that it is VERY difficult to guess parentage of a mixed breed dog. I came to that conclusion after reading Scott and Fuller’s study, and looking at the photos they have of some of their crosses (beagle/cocker for example.) If you look at all their photos, some of the pups look like their father, some their mother, and others look like just about nothing at all (or another breed altogether.) Dogs are so structurally labile, surely it is truly hard to predict exactly what a mix is going to look like. Don’t get me wrong, I think it is fun, and sometimes useful to try to guess the parentage of a mixed breed dog, but I am often shocked at the dogs who’ve come into my office described as a 15 pound “German Shepherd/Terrier” cross, or a “Labrador/Border collie.” (If it’s over 30 pounds and is black and white and in Wisconsin, it is automatically a Labrador/Border collie cross…)

All this is good ammunition against breed bans… who can be sure a dog is a “pit bull” anyway? This study has the potential of providing good science that can be used to fight breed bans, which I am adamantly against.

Another study was presented by Dr. Amy Marder, another Board Certified Veterinary Behaviorist. She is now the Director of the Center for Shelter Dogs in Boston, a great use of her knowledge and experience. They sent in DNA samples, also to the MARS Wisdom panel, of dogs identified as “pit bulls.” Sure enough, they came back with some Am Staff yes, but also plenty of Viszla, Gordon Setter, Irish Setter, etc etc etc. In some of the truly ‘bully’ looking dogs, Am Staff wasn’t even present, or was present only as a ‘trace’ amount. She also showed a slide of a fuzzy, fluff ball spaniel-y looking thing, who turned out to have a signficiant amount of Am Staff… who would have guessed it? (Not me, neither did any of my colleagues).

Granted, we all agreed that DNA testing of dog breeds is a work in progress. Is it 100% accurate?  No, it truly isn’t, it is relatively new, and it is so complicated (after all, look at all the breeds that are less than 150 years old that were created from other breeds…), but it still can be interesting. Have any of you tried it? I’m tempted to send in some samples of mixes I know the parentage of, just to see what comes up….

Lastly,  Dr. Marder discussed a study (I’ll find out where it was published, think it was in 2007) in which they did behavior evaluations on 61 shelter dogs, 21 of whom had been identified as ‘pit bulls.’ The ‘pit bull’ types showed no more aggression over food  or handling than the ‘non-pit’ dogs, although the bully type dogs did test out as being more easily aroused. In my experience with bully breeds, (which is significant but not extensive), the arousal issue is an important one. A low threshold for arousal and difficulty de-arousing is perhaps the biggest (and only?) difference I’ve seen in bully breeds.

I truly disagree that ‘pit bulls’ are nothing like other dogs, and more and more the research seems to confirm that. Does that mean I think that “all it takes is love” to rehabilitate a dog with a shady past, and that you could send an ex-fighting pit to a naive family with 5 kids? No, of course not, but I do think that every dog should be evaluated as an individual. I have met stupid, slow Border collies, and incredibly aggressive Golden Retrievers, and yes, even people of English ancestory who are good cooks (that would be me, honest.)

Meanwhile, it’s going to be 50 degrees tomorrow, which means lots of mud but a tempting appetizer of spring. The sheep get shorn Sunday morning, can’t wait to see how they look out from under their wool coats.

Here’s a photo of Will and Lassie taken about one minute ago by the back door to the office. Poor Lassie looks like she can barely wait another minute to get home! It’s almost 5:30 pm and we are all more than ready to leave the office, get home to the farm, eat dinner (beef, a sardine, cooked oatmeal, broccoli, green beans and carrots for them tonight, don’t know about me but it probably won’t be as healthy!) and go on a walk.  This will be my first weekend in a month in which I wasn’t either working all weekend or super sick… oh boy! Yippee! (I’m going to stay off line this weekend, so I’ll post your comments Monday morning, need a few days to forgot all about computers!)

Hope you all have a wonderful weekend. 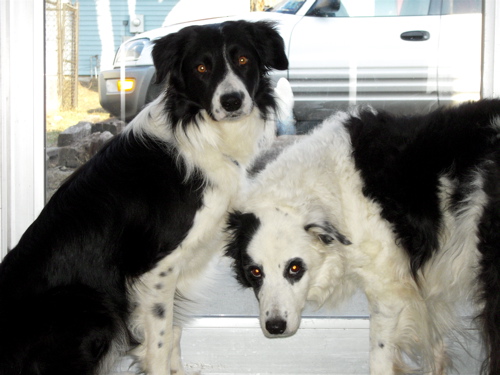 « Need Your Advice and Ideas! [Stay tuned for Podcast…]
Willie Learns to use his Nose; Sheep Shearing Fun »