Welcome to an ongoing inquiry about the behavior of people and dogs.
Blog Home >> Dog Behavior >> Something To Chew On

Birds gotta fly, fish gotta swim, and dogs gotta chew. At least, that is my belief, backed up with virtually no research whatsoever. This belief is based on 1) understanding that the impressive teeth and jaw structure of a dog is the Swiss Army knife of dentition, able to tear, rip, shear and crunch without having to switch tools, 2) the inclusion of long chewing bouts in the natural behavior of canids, 3) that an internet search on “chewing in dogs” leads to a multitude of articles on how to stop dogs from chewing, suggesting to me that dogs are highly motivated to do so, and 4) the observation that a good chewing session appears to relax my dogs as well as a long walk.

We all know that dogs need to chew, and thus pet stores and the internet are full of appropriate things for them to chew upon. Yet often our attitude toward their chewing is to see it as a problem, rather than an interesting behavior that deserves more attention and inquiry. What do we really know about chewing in dogs, beyond how to keep them from ripping up our designer pillows? (Well, that would be someone else’s theoretical designer pillows, since the farm house I live in has nothing that could be classified “designer” in it).

If left to their own devices, how often do dogs chew? Are there benefits to encouraging them to chew beyond keeping their teeth clean? I did some research for this post and quickly discovered how little information there seems to be on the behavior as part of the natural repertoire of the dog. Even Steven R. Lindsay’s extensive series on applied dog behavior (Vol 3) discusses chewing as problem behavior to be prevented, and managed by the provision of appropriate chew toys. This is not a criticism of the books, the series is essentially about training and behavior problem solving, but it highlights what I’ve found in my (albeit brief) research: Our perspective on chewing is that it is a problem to be solved.

Yet I am finding myself categorizing chewing as an important behavior in a dog’s repertoire, and I’m curious what you think. Both of my current dogs, Willie and Tootsie, appear to be as excited about their chew sessions as anything else I have to offer. That could be because their “chew toys” are clearly categorized as food, but I have a gut feeling that it’s not just the food they enjoy, it’s the process of using their mouths the way nature intended. I’ve had the opposite impression of their response to some of the popular interactive games available, like the Nina Ottoson games, which I think are cooler than cool, and I suspect the dogs think are slightly irritating. (But that could be just my own dogs.)

Currently the standard advice to provide a good life for a dog, especially one who lives as a companion dog in a city or suburb, is to give her a good walk at least once a day and exercise her mind with some games or training sessions. Perhaps we need to add in a daily chewing session? What do you think? I’m curious about your thoughts on the matter.

Safety Issues: I can’t bring this issue up without mentioning the importance of giving dogs objects to chew that are safe. The primary concerns are 1) Toys that can break apart and create small pieces that choke your dog. Don’t think this is just marketing: I almost lost a dog a million years ago when he began to choke on a piece of rawhide. I didn’t use rawhides for years because of it, would never give them to a dog when I wasn’t in the same room with them, and take them away if they’ve been chewed down to a small piece I think might be dangerous. I will admit to a certain amount of obsessiveness  here, but if you’ve ever seen your beloved dog’s tongue start to go blue, you’d understand.

2) Dental Health: Chewing can be a great way to keep your dog’s teeth and gums healthy, but chewing on hard objects can also break a dog’s tooth. You may recall a post I wrote about Willie’s root canal, and how displeased I was when the veterinary dental specialist informed me after the procedure that Willie should never be allowed chew toys because his tooth was now more fragile and might break. Given how important I think chewing is to dogs, this was not welcome news. I did restrict chew toys, but the tooth broke within six months anyway and I had it removed. I still avoid hard objects, and don’t give him Nylabones or antlers, but don’t hesitate to let him have satisfying chew sessions on a regular basis. As we well know, every dog is different, and you need to choose the toys appropriate for your dog’s size, teeth and jaw power. I love how many of the new, well-made toys will rank how well their products will stand up to vigorous chewers, some dogs being able to chew their way through the Great Wall of China if given a chance.

3) Toxic Substances: What’s in those chew toys anyway? Are they good for your dogs? It is those concerns that motivate me to buy American-made rawhide only, and to love the healthy toys available through Planet Dog. I’ll be the first to admit that I give my dogs some edible chews whose exact ingredients are a mystery to me, but I do try to be mindful of concerns about additives. I still love giving my dogs real bones, in part because there is nothing added to them (and that’s what their teeth are designed to chew on anyway), but of course would never give them cooked bones or the long, harder bones of large animals that could break a tooth. Here’s a new product line I’ve never used: Bionic Pet Products, anyone used any of these toys or stuffable chew toys yet? Willie and Tootsie still get a stuffed Kong every morning, but I think I’ll give the Bionic line a try.

Two questions for you then: Do you agree that dogs “need” to chew, or that allowing them to use their mouths and teeth on a regular basis is good for them? And what do YOU give your dog to chew? Favorites? Products you have had problems with? I look forward to your always thoughtful contributions.

MEANWHILE, back on the farm: The leaves are out, the tulips are blooming and the summer breeding birds have arrived. Just last week we greeted the Rufous-sided Towhee, the Rose-Breasted Grosbeaks, and the Orioles. Jim and I are about as busy with the farm as one can get; all of you who also live in the country know just what I’m talking about. Everything needs to happen RIGHT NOW! Reseed the bare patches in the pasture QUICK before it gets too hot and the rains stop. Clear out the new trail through the woods NOW before it gets too overgrown. HURRY and weed out the flower beds before the grass takes over. Set up the portable electric fences (which involves trimming the grass beneath them each time they are moved) for the week’s controlled grazing. Feed the 5 bottle lambs 3-4 times a day, including Spot’s triplets who just couldn’t ever figure out the self feeder and take forever to get milk into their bodies.

I mustn’t give the wrong impression: We are busy (especially with this being the last week of the UW class I teach to 150 students) but spring is heaven here, and sometimes I think we are the luckiest people in the entire world. Willie and I get to work sheep again and have been loving it, the world is a palate of greens and pinks and blues, and the bird song wakes us up each morning like a symphony.

Here are the two bottle lambs who are masters of the self-feeder, Ralphie (black, in the front) and Goat Girl in the back. They suck like a vacuum cleaner and are done in less than 30 seconds. Lambs wag their tails when they are getting milk, and these two look like  helicopters when they are feeding. 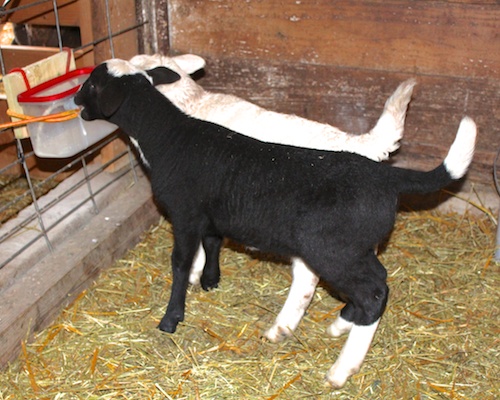 Here’s the action at the bird feeders–I took the photo through the kitchen window so it’s not as sharp as I would like, but I thought you would enjoy the colors. (Along with all the Goldfinch, there is a male and female Downy Woodpecker and a male Rose-breasted Grosbeak in the bottom right corner. We’ve had as many as 10 males RBGs at the feeder at the same time, such fun. Along with their physical beauty, they have a beautiful song, sort of like a slow, raspy Robin whose notes start with W’s. 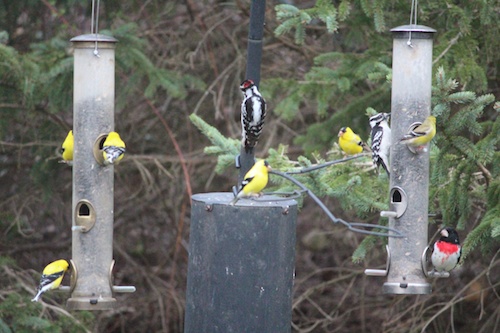