Welcome to an ongoing inquiry about the behavior of people and dogs.
Blog Home >> Animals and the People Who Love Them >> Toy Story with a Twist

We’re still all about toys at the office, given the boxes and boxes of them that arrived last week. And there’s nothing like having a new puppy in the house to get you back to thinking about toys!

A great happy surprise has been that the toy we were afraid would live on our shelves forever, Sherman the (Big) Sheep, has been a big hit. It’s sold more than any of the other toys, and we are still smiling about it. (And so is Will, he adores it.)  There are a few left, but we don’t expect them to hang around for long. Just fyi, the loser of the new toy choices is the hapless Scorpion, undoubtedly an image most people don’t want to see, and to make matters worse, it’s covered in “nature’s warning colors–red and black–just to make it more off putting. Poor little scorpions, I suspect they’ll be hanging around for awhile. All our dogs are fine with that, the Scorps are one of their all time favorite toys and we’ll be forced to take them home if they never sell. Picture Border Collies, Goldens, Beagles and Heeler mixes crossing their paws.

But I thought I’d mostly write today about two toys that we discovered during our research that are, well, weird. I don’t know any other way to describe them. Weird toy number one is the Doggie Lover Doll, manufactured in Brazil for dogs to have something to hump.  Seriously. Here’s what the manufacturers said in their release: “Human beings have their hands to masturbate themselves, now the domestic animals…. can alleviate themselves with a toy designed specifically for them.” Yup, you read it right, the doggy equivalent of a plastic doll. Oh my. (And no, we won’t be adding it to our collection of toys available on our website! I tried to find the website for it, but I got a “website down” message. Should I not be surprised? Was this all a big joke?)

Weird toy number two is . . ., wait for it:  Mr. Poops! Yes, indeedy, even you can buy a toy that looks exactly like dog feces. Imagine the fun you’ll have picking it up and tossing it around your living room floor. It’s made by the same people that make some of our favorite toys, My Dog Toy, but geeez, guys, who thought that up?

I remember one speech I gave at a fund raising dinner at which the hotel staff had decided it would be soooo funny to provide the chocolate desert in the form of dog poop. Apparently they all laughed like loons, but imagine a room of very quiet people when the desert plates came out. No one ate the desert, they had to throw it all away and the laugh turned out to be on them. You just gotta love our species sometimes. (Does anyone remember this and where it happened? Surely it could  have only happened in one place!)

Anyone else know of more toys to go into the “what were they thinking” category?

MEANWHILE, back on the farm: Will had oral surgery on Tuesday and Hope went to a friends for a few days so that Will could come home and recuperate.  (And yup, that was the tooth that I had a root canal done on, after which I was told that the tooth would forever be brittle and he could never chew on anything harder than a rotten tomato. Okay, I exaggerate, but if I had been told an hour before what was told an hour afterward, I would have elected to have the tooth extracted then. Before the root canal the dental specialist told me that it would give Will a “fully functional” tooth. That means a tooth that can chew on something harder than a sock  to me . . . But I won’t elaborate here lest I sound churlish; see an earlier post for a discussion and great comments about teeth, chewing, bones and dental procedures.) After thinking long and hard about the issues, I had decided to allow Will to chew on some objects, while avoiding hard ones like the long bones of cows, extra hard chew bones, etc. I just don’t think a dog can be a dog if he is not allowed to chew on anything. So I figured the broken tooth was inevitable, but the timing was unfortunate, to say the least. But I still will allow Will to chew on soft bones and some toys harder than dish rags. Everything in moderation.

For now my challenge will be preventing Hope and Will from playing tug games until next Tuesday (so that Will’s gum can heal). It is their absolute favorite game, so life will be interesting to say the least. Thank heavens for crates! Hope just came back and charmed me with his sweet, enthusiastic greeting and adorable ears. I’m sooooo curious to see how Willie responds to his return. Thrilled to see him? Or not?  I’ll let you know next week.

At the farm the birds and flowers continue to be a delight. It’s green and lush and about as pretty as it can get here. The barn is full of swooping barn swallow youngsters, the wrens are busy on their second nests of the season, and the Cedar Waxwings are gobbling up the berries from the Service Berry tree. They are such elegant birds! Here’s a photo of one that a friend just sent me from his summer home in upper Michigan. 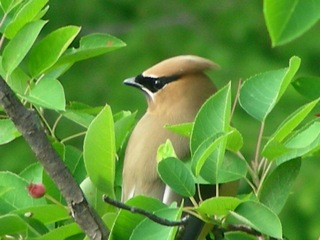 « Chase This, Not That!
Do Dogs Imitate? [And see you in Milwaukee?] »