Welcome to an ongoing inquiry about the behavior of people and dogs.
Blog Home >> Animals and the People Who Love Them >> Two New Books — Snack Food and a Five Course Dinner

I thought you might be interested in two books I’ve devoured lately, as different from each other as a Bichon and a Bouvier, but both wonderful in their own ways. Right now I’m immersed in The Divine Life of Animals by Ptolemy Tompkins, subtitled “One Man’s Quest to Discover Whether the Souls of Animals Live On.”  This is not beach reading, it’s a serious yet engaging inquiry about whether animals have souls. (Note that he asks that in the book, but answers in a way in the subtitle.) I’m only half way through, but I’m fascinated by it, and love that someone has taken the time to seriously ask the question: “Do Animals Have Souls?”  To answer that question, Tompkins first takes us through a comparative survey of how different cultures and religions have perceived who animals really are, and who humans are in relation to them.

What is especially interesting to animal lovers, I think, is the almost universal perception of early cultures that animals and humans were nowhere near as different or divided as is often believed today. The author writes: “Why are animals so important to primitive cultures? One big reason is that for primitives (just as for all the sages of the East), animals and people aren’t really all that different from each other. This belief caused considerable irritation to the anthropologists, linguists and other scholars of the late nineteenth century…” I’ve gotta love someone, who in the midst of a serious inquiry about animals, religion and the nature of life, writes sentences like that.

Ptolemy even addresses the famous Rainbow Bridge poem (“Just this side of heaven is a place called Rainbow Bridge. When an animal dies that has been especially close to someone here, that pet goes to Rainbow Bridge… The animals (there) are happy and content…. and when you and your special friend finally meet… you cross Rainbow Bridge together.) He admits that he finds the poem a “little on the sugary side” (full disclosure, so do I, but it still makes my cry) but also that it brings up a critical issue to many: Can animals go to heaven? That question turned out to elicit more mail than he’s ever received from any one article he’s ever written.

There are so many issues here, from do animals have souls (and thus, what is the nature of “animal” anyway, much less what is a soul?), how have we humans thought of our relationship to other animals over time.If you believe in something like a heaven, do you believe animals go there? If you are interested in an intellectual discussion of these issues you’ll love the book. If you’re looking for a book to let your brain rest and to allow you to escape for awhile from reality, skip this one and pick up the next one.

The Dog Who Knew Too Much is the 4th book in a series of mysteries written by Spencer Quinn. The books are about a struggling private detective (why is that character so popular… detectives are always struggling, right?) and his dog, Chet, and is written from the dog’s perspective. I have to admit that this is usually something that would put me off, not attract me. I haven’t been a fan of most books written from a dog’s eye (nose?) view; they just never seemed to click with me. That was true of The Art of Racing in the Rain, a huge best seller that thousands loved and I just, well, didn’t. (I wrote about that in an earlier blog.) But Chet and Bernie are now in my circle of best friends. I just downloaded the first three books onto my Kindle to accompany me to Scotland and England.

If The Divine Life of Animals is a full course dinner, ranging from appetizers about the author’s love for his pet rabbit to the entree-rich and scholarly comparison of religious beliefs about animals, The Dog Who Knew Too Much is snack food. Good snack food. “Popcorn” books I call them, books that flow like water downhill and practically read themselves. In no way do I mean that to demean either the books or popcorn. I love good popcorn, and will argue to the death that snack food is an important part of a healthy diet. This fourth Chet and Bernie mystery is like really great fresh popcorn with just the right amount of real butter and salt, followed by, oh yes, an entire box of Junior Mints.

Chet’s comments are laugh out loud funny. Here’s just one, early on when we’re learning about the two principle characters. “I remembered that day (the day that Chet found a new home with Bernie), a bad day–flunking out of K9 school just before the leaping test, my very best thing! Was a cat involved? Those parts are pretty hazy….” Chet is always having a vague thought that then leaves his mind as someone mentions bacon or he tries to sort out why someone would refer to your “baby blues” when his eyes are brown…. Everyone, understandably, reacts to books written in a dog’s voice differently, but for the record, this one works for me.

I’d love to hear what you think about a range of issues — On a serious note, do you believe animals have souls? Whoa, I know, it’s a heavy question. (What are souls anyway?) Second, read any good books lately? I’ve got plenty of room on my Kindle to add more!

MEANWHILE, back on the farm: After a few hot and nasty days, accompanied by some pretty serious rain (poor Katie in our office had her parent’s house attacked by falling trees), it’s clear and gorgeous. A perfect fall day. We count ourselves lucky to miss the floods, fires, hurricanes, earthquakes, tornadoes, famines and other dramas occurring all over the world right now. I’m hoping to get outside soon, but I’ve got some more work to do on the seminars I’m doing in Scotland, lots of house prep and packing, etc etc. Fall is such a busy time for foodies like me: I’ve got wild plums in the frig to process, lots of veggies to get in the freezer, organic local chickens to order, gardens to take care of…. As I write Jim is taking down the portable electric fence and cleaning out the water tank for the sheep. The lambs are thriving, they are almost fat the grass has been so rich this summer, so I’m cutting down on their grain. Willie boy is up to 3 20 minute walks a day, and much less indoor PT for us to do. When we come back, we can start him for very brief periods in the hobbles, off leash. Whee!

Here are some scenes from the farm:

The bees are busy on the Joe Pye Wee. It’s hard work making enough honey to make it through a Wisconsin winter. 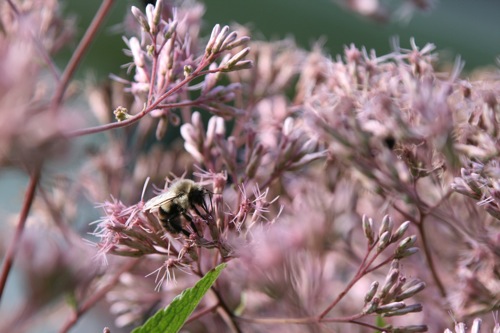 The Goldenrod is in its prime now; it will encircle the farm with its yellow gold blooms for another month. 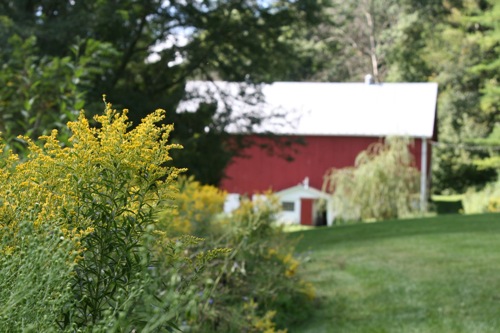