Welcome to an ongoing inquiry about the behavior of people and dogs.
Blog Home >> Animals >> Using Secondary Reinforcers – Wisdom from Ken Ramirez

I wish the world could have seen Ken’s seminar on Sunday in Worcester MA, it was fantastic. For those of you who don’t know his name, he is the Training Director and Senior Trainer at the Shedd Acquarim, has trained exotic animals for over 30 years, and could train just about anyone to do anything. I left inspired and crazed to train something, anything, and had to stop myself from trying to teach the flight attendant to scratch her head on cue.

When I got home, close to midnight, I sat down with Hope and taught him to flip his hips sideways while lying down to “Settle” before I even walked upstairs. Took five minutes. Scary easy, and extra fun because of being inspired by Ken.

However, in order to get home Sunday night, I had to miss the last hour of Ken’s videos. I heard they were great… anyone care to tell us what I missed?

Here’s what I didn’t miss: some excellent points about what are often called “Secondary Reinforcers.” [Note to training geeks: there are some details about terminology that Ken went into that I found fascinating, but it would take a couple of posts to explain them, and you’re better off going to see Ken in person if you are interested in terminology.] But here is a summary of points that I think are  relevant to all of us:

First, many of you know that “Primary Reinforcers” are things that are inherently reinforcing (that automatically cause an animal to increase the frequency of a behavior). Strictly speaking, they are things that an animal needs to survive: food, water, etc. When you give your dog a treat for sitting on cue, you are using a primary reinforcer.

Secondary reinforcers are things that are learned by an animal to be associated with Primary Reinforcers, and thus eventually elicit a similar response through classical conditioning. For example, if you repeat “Good Dog” and follow up it with a treat enough times, eventually your dog will work to hear you say it. But here’s what I learned from Ken:

It is critical to continue to link a secondary with a primary  part of the time, no matter how long you’ve been using it. In his experience with his animals (who have to perform perfectly in shows and when being treated medically), even if the animal inherently enjoys the secondary reinforcement, it has to be maintained with a primary if you want a totally reliable behavior. That’s true even if the animal loves the secondary reinforcement. For example, at the Shedd, Beluga Whales love having their tongues rubbed, it clearly feels good to them and they seek it out. However, Ken considers it still a secondary reinforcement, and is very careful not to over use it.

Once your dog is clearly thrilled with what you are doing, then begin to use it as reinforcement by asking for a simple behavior, then use your 2ndary R, and follow with the primary R. After that, for a long time, use the 2ndary by itself only twice in a session, and never in a row. Gradually increase the use of the 2ndary, but be very careful not to overuse it. (By the way, he is NOT talking about a click for those of you who are clicker trainers. He considers that a marker, not a reinforcer.) Clearly there is a lot to talk about here, but this is enough for now to get us all thinking about the issue.

MEANWHILE, back on the farm, I had a chance to think especially  hard about all this the day after the seminar. I loaded up the dogs, the plastic bags, the treats, the water, the camera and the leashes and drove over to a wonderful place to walk the dogs. Hope has been there off leash 5 times before, but I am very careful because in the beginning it is close to a road. In the past he’s gotten lots and lots of food treats for coming when called, and for checking in with me on his own.

When we arrived I looked for my bait bag and discovered I’d left it on the counter in the house. Whoops, no food. No primary reinforcer for a young pup who was going to be off leash for 45 minutes. I pondered keeping him on leash the entire time (I always start with him on leash) and thus him getting less exercise, but decided to forge ahead because 1) the path has a natural boundary of high grasses 2) Hope tends to follow Will, who always stays on the path 3) Hope has had 5 lessons there and had done very well and 4) I DID have a primary reinforcer: water. It was hot, and I knew the dogs would be thirsty after not very long. So I decided to risk it, but here’s what I did:

1. Unlike our other trips, during which I called him back to me often for training purposes, I decided to call him back only when absolutely necessary. I knew he wouldn’t always be thirsty, and wanted to have the water retain its power. I ended up calling him to come five times in 45 minutes. Every time he came he got water, but I didn’t let him drink his fill. The last time he drank one quick lap and moved away, so I immediately leashed him up. We were close to the end anyway, and at a place I have always put him back on leash, because it gets close to the road.

2. I used Willie to move Hope around in space, calling Willie (by name “Willie Willie!). This helped a lot and meant I only had to call Hope 5 times total. I also used clapping to get the dogs to come. Clapping is not trained as a recall, but is used to motivate the dogs to speed up, sometimes when they are playing with each other, sometimes when running to me. I could use it without polluting my “Hope, That’ll Do!” cue.

3. I managed to keep my hands to myself and never pet Hope when he came back, because he behaves as though he hates it when he is active. He only likes petting when he is sleepy and tired. Petting would have been punishment. Most relevant to Ken’s talk, I didn’t fool myself that “Good Dog” or any other 2ndary R was going to be effective, at least not for long. And I didn’t want to take away its power, so I said “Good Dog” only twice before he started to drink, and kept my mouth shut the rest of the time. Please send chocolate, this is not easy for me.

4. I was ready at any second to bail and put him on leash if I saw the slightest sign that he was going to get himself into trouble. Most of the walk was a long, long away from the road, and there were plenty of scents and sounds to keep him occupied. If he had put his head up and started air sniffing, or completely ignored any signals from me, I would have leashed him up in a microsecond.

Here he is, coming when called, Goooooooooooood Boy! 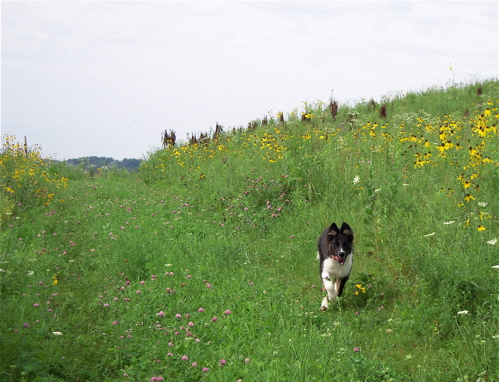 And here I am Saturday night in Masssachusetts, after a lovely dinner with our host Dana Crevling from Dogs of Course!, another trainer Carolyn whose last name I have rudely forgotten, Ken Ramirez and Karen Pryor (how great that she was there too for the entire weekend!). We ate at a restaurant with a giant crab balloon on its roof. Seriously. And I only had one Corona for dinner,  honest. 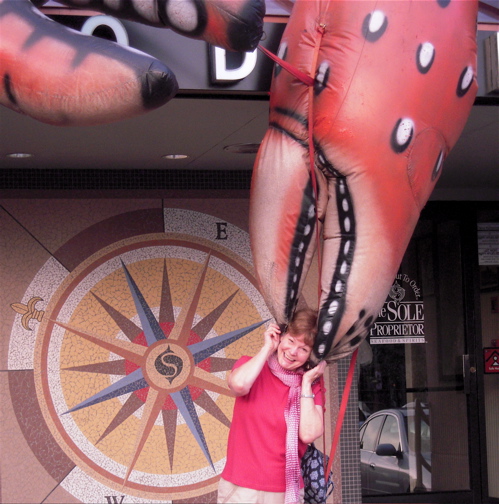