Welcome to an ongoing inquiry about the behavior of people and dogs.
Blog Home >> Animals and the People Who Love Them >> Great Article on Dog-Dog Aggression

Have you seen the latest issue of The APDT Chronicle? It has a fantastic article by Suzanne Hetts and Daniel Estep (both CAAB & Ph.D) titled Safety and Ethics in Working with Dog-to-Dog Aggression. Anyone who treats dog-dog aggression, or who has a dog who might have that problem would do well to read it. (And to stay tuned, Chronicle will have more articles on dog-dog aggression in several issues to follow–Pia Silvani and I are writing one together for an upcoming issue.)

One of the important points they make is that dog-dog aggression is often not taken as seriously as aggression toward humans, and yet, it can have horrific effects on both species. No one knows better than they: their Dalmation and Irish Setter were brutally attacked by a loose dog last year, and were only saved thanks to the efforts of 4 people–Dan, Suzanne and 2 brave and altruistic passers-by. Suzanne’s hand was broken and was in a cast for 5 weeks. Dan, Suzanne and the dogs were seriously traumatized . . . how could they not have been?

And yet, we all know of people who are willing to work with dog-dog aggression cases, but not cases in which humans are the targets (at least not directly.) However, aggression toward any species can result in serious injury, even death, and needs to be taken seriously before someone takes on the task of trying to help with it. The article in The Chronicle does a great job of listing what is needed to be able to ethically and responsibly work with dog-dog aggression cases. If you can’t get a hold of a copy of the magazine (July/August 2010), they summarize it on their website, Animal Behavior Associates.

MEANWHILE, back on the farm: I’m in the usual flurry of trip prep, leaving tomorrow at dark thirty to do a seminar for Dogs of Course outside of Boston. I speak on The Biology of Emotions on  Saturday, and Ken Ramirez talks on Sunday on Solving Training Problems, Non-Food Reinforcers among other things. I’m staying on to hear Ken’s talk; I always learn a lot when I listen to him speak. The seminar is booked solid and I don’t think they can take any more registrations (waiting list?), but come up and say hi if you are a blog reader. It always warms my cockles, wherever the heck my cockles are, to meet a blog reader in person.

Speaking of cockles, or words vaguely related (sorry, can you tell I’m getting a little slap happy?), here’s a visitor to the farm. There are lots of turkeys in the area, they’ve flourished here once they were re-introduced, but they usually don’t come knocking on the front door. This one was all by himself beside the garage as I drove up. As I struggled to quietly get out my camera and get the window down. he strolled across the driveway and meandered up the hill behind the house, but in the pictures he is just a few feet from the garage. The pictures aren’t great quality, but I can’t resist giving him (her?) some press. 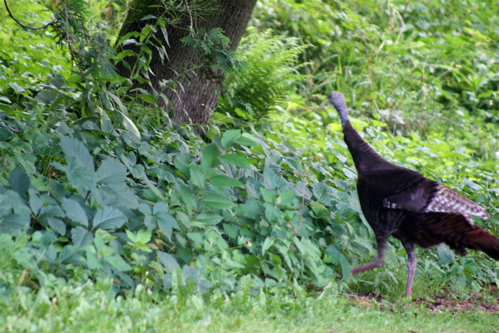 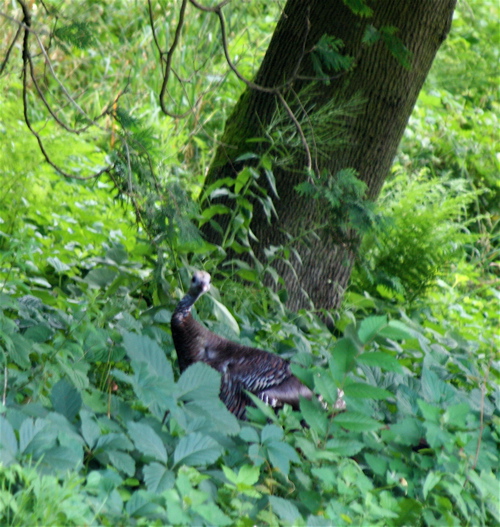 « What’s In It for Me?
Using Secondary Reinforcers – Wisdom from Ken Ramirez »