Welcome to an ongoing inquiry about the behavior of people and dogs.
Blog Home >> Animals and the People Who Love Them >> What Dog Training Can Teach Us About Resolutions

Last week I listed my “non-resolutions,” not wanting to call them New Year’s Resolutions because so many fail within weeks. (U.S. News reports that 80% fail by early February.) 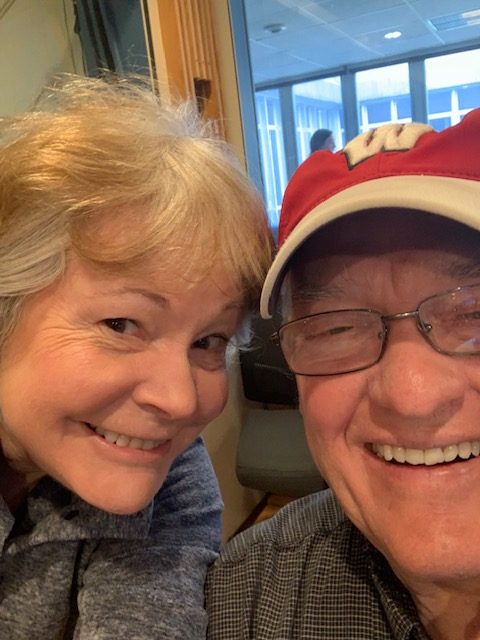 But I was on the Larry Meiller Show last week, (you can listen in the archive files) and found myself thinking about how the basic principles of good dog training could increase our chances of keeping resolutions. Here’s what I came up with:

First, be realistic. Every professional animal trainer that I know has a clear sense of what they can accomplish with the time and resources that they have. Example: Should you spend time teaching a dog like a Great Pyrenees to go walking off leash in the woods? Would you like to invest in my future career as a National League Football player? (The other name for an off leash Gr Pyr is a “Dis-a-Pyr.)

Second, be specific and positive. What do I want, and how do I reinforce it? In other words, you’re not going to “lose weight,” you’re going to lose 5 pounds by the end of the month and reinforce it by buying more sheepdog training videos. (This illustration is totally random. I just pulled it out of the air, obviously.) Example: You’re not going to train your dog to “be more polite,” you’re going to write out what that means (All four feet on the ground with visitors? Walking with a loose leash?) and be 100% certain about what your dog finds most reinforcing in that context.

Third, go public. Okay, this time I’m moving from human psychology to dog training rather than vice versa, but we’re talking about mammals either way . . .The American Psychological Association lists “sharing your resolutions” as one of the ways to stay on track with resolutions. Example: I wrote last week about writing fiction for a few hours three times a week for three months. I knew that I’d feel more committed to it if I put it out in the universe. In addition, telling people what you’re working on is a great way to get support. I didn’t think about that aspect of it, but many of you sent me lots of reinforcement. It came as a surprise and it felt amazingly good. Thank you!

Fourth, keep track. When I began doing consultations I quickly learned the value of having clients write notes on how things were going. Without the notes I saw one of two things happening often: Often, clients would dismiss how much progress they’d made and leap frog from one problem to another. Conversations would go like this:

Me: “So, you came to me about teaching Rover to come when called; how is that going?”

Client: “Oh, it’s fine, I guess he does that now, but his barking is driving us crazy.”

Me: [Which version would you like? What I said or what I thought?]

Conversely, clients would claim remarkable success even though the facts seemed to suggest the opposite. That’s why keeping notes can be remarkably helpful. I began taking my own notes after working with clients and seeing the above, and found it to be incredibly helpful. Sometimes you go back and read notes from a few years ago and realize that, uh, you’re still working on the same issue as if it was a new one. Or you are reminded that a big problem months or years back is completely resolved. Either way, keeping quick notes about the progress of any resolution in invaluable. 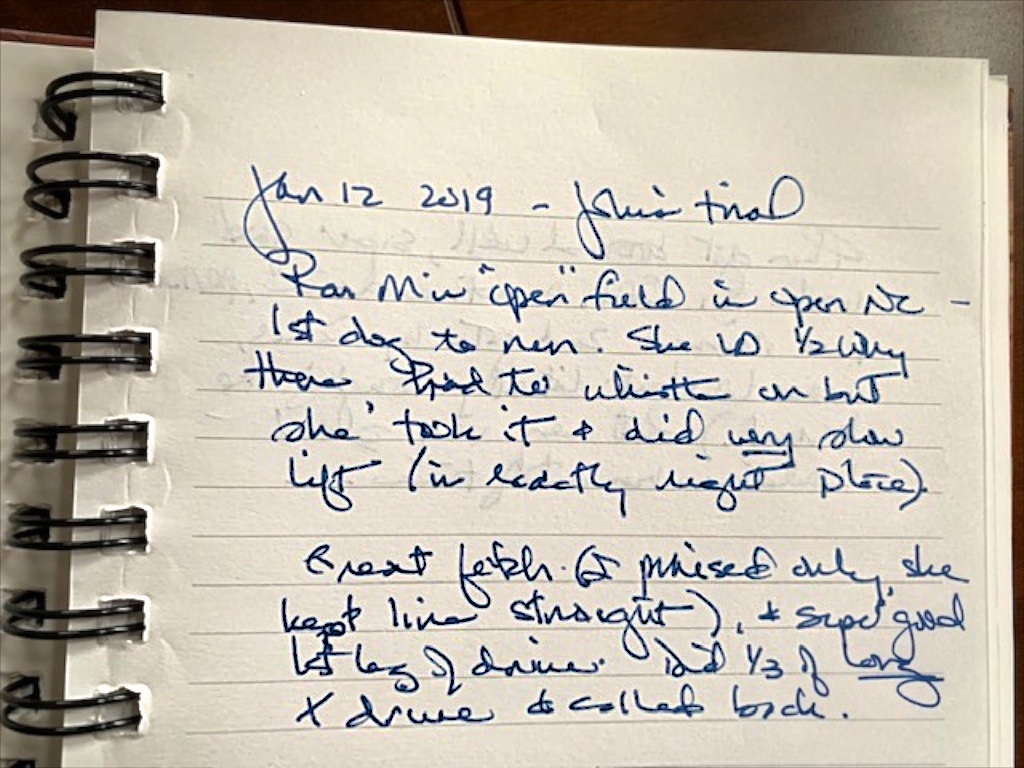 Fifth, expect set backs. It happens all the time in dog training, and it understandably can be distressing. But it happens all the time in life too, and one set back does not a disaster make. I’ve learned that this is especially rough when you are dealing with a serious behavioral problem–a dog who is aggressive to visitors, for example. I’ve had clients who were devastated when their dog growled at a neighbor, after months of getting happier and happier about visitors. But set backs are part of most learning curves, and the trick is to carefully analyze the contexts of the problem (what was the antecedent in ABC talk?), take several steps back and begin again. Usually you can move forward through the same progression, but much faster than the first time.

And now we are full circle, because expecting set backs is one way of being realistic. (Why does that convergence make me so happy?)

Okay, your turn! What has dog training taught you about keeping commitments? Or vice versa? I can’t wait to read what you have to add to the conversation.

MEANWHILE, back on the farm: Another great sheepdog trial at the BYB Winter trial series. We got to run on a new field and Maggie got to run (Non-Compete) in Open, which means a MUCH longer outrun and drive, and, if you get to it, a shed as well as a pen.

The sheep were about 325-350 yards away, or on Mars, one of the two. Keep in mind that 350 yards is the equivalent of 3 and a half football fields, or a fifth of a mile. Something about the distance or the field confused Maggie (although she has run this far before) and at one point she zigged far to the left and began to run toward a road. The kind with cars on it. It scared the hell out of me; but thankfully she stopped the second I whistled, got back on the course and found the sheep.

After that she did a beautiful fetch, keeping the sheep in line all by herself, and did great work on the drive. Later we ran in Pro Novice (sheep closer) and she still messed up her outrun, but then did an almost perfect fetch and drive. Except she is sooooo slow. Argh, seriously, a person could check their email while she is driving the cross drive. It has advantages, but it also means you often run out of time.

But Maggie is Maggie, and I am loving doing the best for her that I can manage. I’m not sure she’ll ever be truly competitive in the Open class, but together we are going to be the best we can be.

Here she is looking out of the barn at our flock, looking to me a bit worried about something: 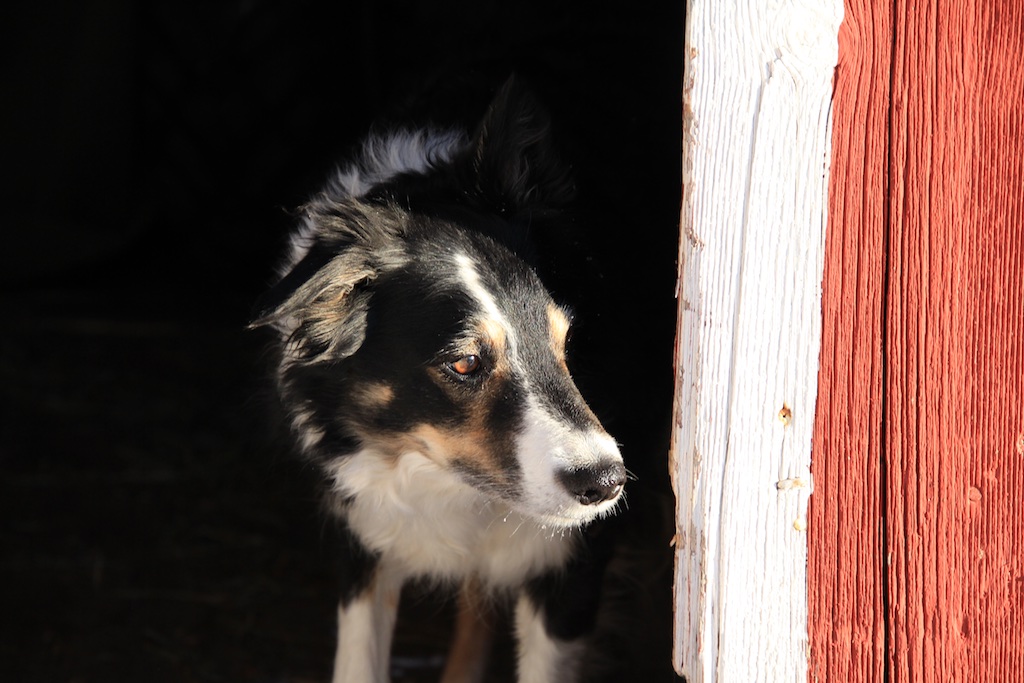 Willie got to drive the entire flock across the field at the break, which made him very happy. While doing so, I discovered a new sport: Sheep surfing, which is when a fast-moving flock of sheep runs into you and picks you up like a tsunami wave and carries you along for the ride on their backs. I won the class, although it seems I was the only entry.

No hard feelings--here are some of the sheep, who allowed me to play with my new camera lens a bit. 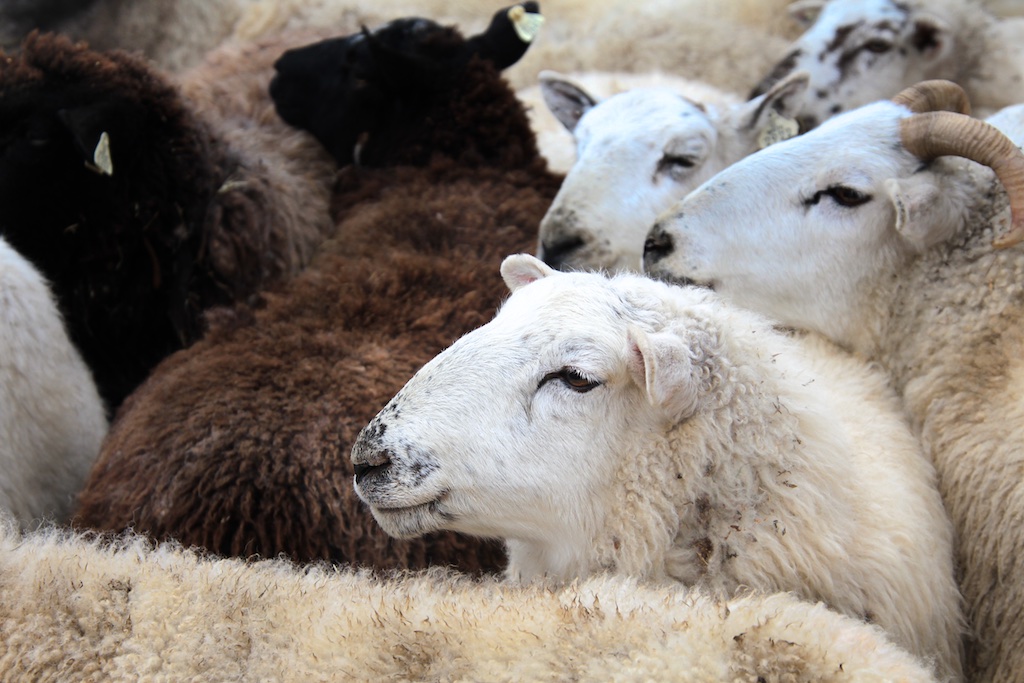 One of my favorite visitors to the trial was Olaf, a dear, sweet rescued (and on-leash!) Great Pyrenees. Pyr’s have such noble heads . . . (I was going to take out the little bit of drool under his mouth, but hey, he’s a Pyr.  Think of it as jewelry.) 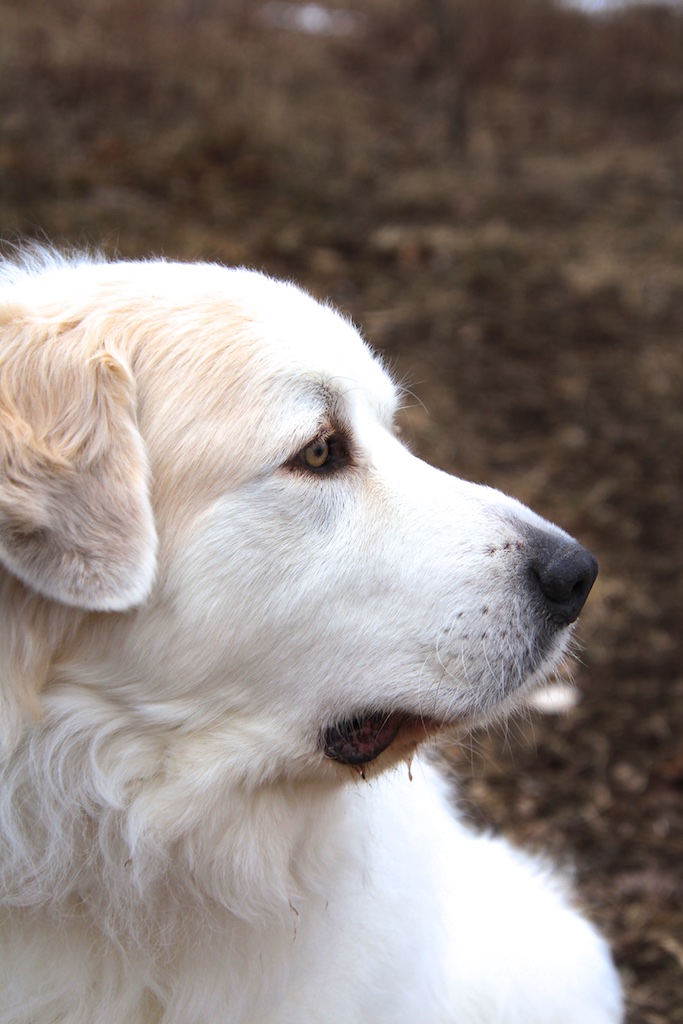 So . . . your turn. How does dog training inform your own habits and commitments? Or vice versa?