Welcome to an ongoing inquiry about the behavior of people and dogs.
Blog Home >> Animals and the People Who Love Them >> What the Dog Knows

I considered calling this blog “I smell dead people,” but decided that the phrase, if searched on google, might add some folks to the conversation we’d rather avoid. However, it is actually a perfect title to a great book, released tomorrow, titled What the Dog Knows: The Science and Wonder of Working Dogs. Written by Cat Warren, an associate professor in English at North Carolina State University, it reads like a novel/memoir/mystery/thriller, and I’m going to read it again, every page of it. Here’s the first paragraph:

I’ve grown more comfortable working with the dead. With parts of them, really. A few teeth, a vertebra, a piece of carpet that lay underneath a body. One of my German shepherd’s standard training materials is dirt harvested from sites where decomposing bodies rested. Crack open a Mason jar with that dirt, and all I smell is North Carolina woods–musky darkness with a hint of mildewed alder leaves. Solo smells the departed.

Good writing is one of life’s greatest pleasures, and this book is full of it.  In just the first paragraph the author has hooked us, introduced us to her working cadaver dog, compared their sensory abilities, and established “place” for the rest of the book. Oh my. Dr. Warren has good reason to know her way around a phrase, she teaches writing after all, but she is also a cadaver dog handler, and by the end of the book she has worked with Solo for years, and has just brought home a new prospect, a spunky female GSD named Coda.

However, Dr. Warren is dead honest (pun not intended but appreciated upon reflection) that she initially had a lot to learn about working with a cadaver dog. Her first hours with her new  German Shepherd puppy, Solo, were not infused with ocytocin. She didn’t like him. He bit and lept and growled at just about everything. Cat’s former dog was a “whimsical, gentle” soul, and the whirling dervish puppy she came home with did not feel like a good replacement. Cat had done due diligence by reserving a male from a great line and a responsible breeder, but ended up driving home with a litter of one in her car. She knew that a singleton pup might cause problems, and indeed, Solo not only came with no bite inhibition or frustration tolerance, but he made it clear early on that he wanted little to do with most other dogs.

But, he loved to work. He was driven, in the way that all good cadaver, search & rescue, and working military dogs need to be. Cat learned, as I remember sheep dog trainers telling me early on, that “too much” energy/drive/ambition could be channeled through good training, while too little was simply not fixable. “You can corral it or damp it down, but you can’t put heart and drive in a dog that never had it,” someone told me once.

I thought of that phrase, and Solo, this morning while Willie and I moved the flock into a temporarily fenced pasture. The sheep didn’t want grass, they wanted the apples that had fallen in the woods, and I had to send Willie into a thicket to bring them back. I couldn’t see the sheep most of the time, but eventually I saw a few heads silhouetted at the top of the rise through the trees. I had to guess where Willie was, and signaled him to flank around the sheep to bring them to me. Time passed. No sheep appeared. No Willie appeared. More time passed. The Robins chirped warning calls and a squirrel chattered above me, but otherwise the woods were silent. I began walking up the woods trail, and finally heard leaves crunch behind me and found Willie trotting up to me, eyes searching, body conflicted. “What? What should I do?”

Part of why I love Willie so much is because he cares deeply about me, or any other person for that matter. He puts his head in the hollows of stranger’s necks and moans in happiness. He looks at me constantly, always asking “What, what should I do?” It makes him a joy to train, like paddling a canoe down a river that is taking you in the right direction all by itself. It also makes him a less-than-great sheep dog, because he looks to me far too often, and doesn’t like to think for himself.  In other words, he is the exact opposite of Solo, and of the personality that is necessary for many kinds of working dogs. Every working dog handler wants a dog who is trainable, but they all want a dog who is driven, DRIVEN, to find the ball, get over the barrier, solve the problem. On their own. Instruction manual not necessary to be included.

You’ll learn about all these dogs and more in What the Dog Knows. I love how the author is honest about her fears, successes, and failures as she and her dog discover the world of working dogs, from the mostly female-dominated search and rescue field to the male dominated world of police dogs. She also is dirt honest about the devastating effect of her dad’s death on her work with Solo, her fears about her ability to do the work, and her conflicts with being both a dog handler and an academic. I loved following her on her journey, and sharing in her courage to tell us about it.

The book stimulates a number of questions and conversations, from 1) why don’t people understand that dogs need practice to use their nose with expertise (note most [all?] of the studies done on a dog’s ability to detect odors done on dogs who have never been trained in scent work) to 2) do dogs understand that the scent of a cadaver means that they have found a dead person? (much less understand the concept of death to begin with). (Bloodhounds seem to know something, Cat describes a bloodhound handler whose dogs would run away from the smell of a dead body.) I always feel that I have a great deal to learn about scent, as someone who doesn’t work with dogs who use their noses,  but if you’d like to learn a bit more about it (and how you can smell better than you think), you might want to watch my seminar, Lost in Translation: How Dogs Use Sight, Sound and Smell to Communicate.

Here’s my question to you, related to dogs who work independently versus dogs who are more dependent. Which do you like best? A dog who hangs on your every word and is a dream to train, or one who is more like a bottled hurricane, and you provide the bottle. I, of course,  ideally would like the best of both, but I’m not foolish enough to ever expect it. You?

MEANWHILE, back on the farm: Sad news: Ralphie died. Seventeen lambs, and it just had to be the one imprinted on me, who followed me everywhere and wouldn’t go up the hill to the pasture until I took him up day after day, and sat beside the flock with him until he finally began to investigate the area where his brother and sister were ripping grass with their tiny, little baby teeth. His illness came on seemingly instantly, and I spent much of one late night with his head in my lap, doing T Touch on his ears and body, giving him fluids and what medicine I had. Most sheep would hate that kind of close physical contact with a human, but Ralphie could never get enough petting and handling from me, and he seemed to appreciate it. He died early the next morning, before I could even get the vet out. He appeared to die of pneumonia, although I suspect that other factors were involved. All the other lambs are thriving, although I now check them obsessively, more often than usual. It is most likely that never having a real mother set him back, even though he got a good dose of colostrum. He always did seem to be behind the eight ball somehow. Perhaps his mother knew that the moment he was born, who knows.

Ralphie died over a week ago, his death was too raw for me to write about it then, so I’m long past the worst of it. But I miss him, and am still in awe of the responsibility of life and death that people who raise animals accept onto their shoulders. I got some of my grief out this Sunday by attacking plants–I ripped up huge amounts of poison ivy, which has been spreading for years under a spruce tree, and was threatening to take over a hedge and a peony bush. Mostly it spreads underground, as my arms and back will attest, from ripping and pulling for hours yesterday. Regrettably, while doing so I ran into a nest of wasps, either Polistes or Yellowjackets, can’t tell you which, cuz I was running like a crazy person toward the house yelling “Jim! Jim!” As if he magically could have made them go away. After examining my stings and feeling quite sorry for myself, I pulled more poison ivy, spent over an hour washing tools, clothes and body with anti-itch soap, and then spent a few hours carefully removing the world’s worst burr producing plant from the woods above the house. I should’ve taken a photo, but I was too busy picking hundreds (thousands?) of tiny, little green burrs out of my T-shirt, socks, and. Better than taking them out of Willie!

Here’s the healthy patch of poison ivy that I haven’t gotten out yet. It might just have to wait til spring. 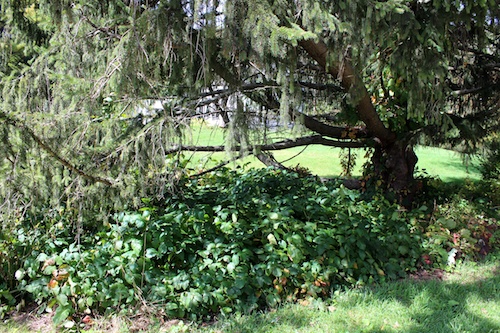 Here’s a more benevolent ivy on the other side of the spruce, I believe it is Woodbine. (But you can see more poison ivy beside it. Sigh, my work is cut out for me.) 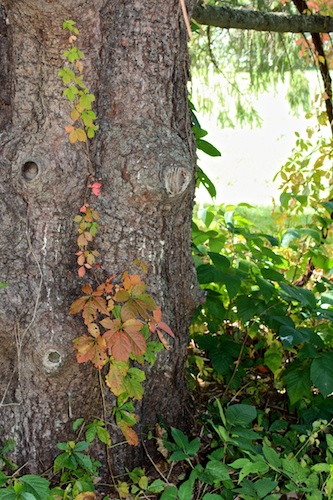