Welcome to an ongoing inquiry about the behavior of people and dogs.
Blog Home >> Animals and the People Who Love Them >> When is it Acceptable to Break the Basic Rules of Dog Training?

Today’s question was inspired by the comments of sheepdog trainer Patrick Shannahan, who argued at a recent sheep dog clinic that I needed to ask Maggie to “take responsibility” for her behavior.

Eeeps! Isn’t that perspective one that trainers and behaviorists (me included) have been arguing against for decades? In most contexts, it is the last thing we should be doing. It calls to mind the ubiquitous comment “I KNOW he knows better!” when some poor dog pees on the rug because he’s never been house trained. Or the standard perception that dogs are jumping up even though they “know” they shouldn’t—and if we just stopped coddling them they’d straighten up and behave.

Perhaps the best extension of this misapplication of asking dogs to “take responsibility” is Will Ferrell’s Saturday Night Live skit on his new dog training method, called “Dissing Your Dog.” In it he advises owners to use sarcasm and humiliation to create an obedient dog. Check it out if you want to a good laugh (but don’t go there if you can’t handle his level of social parody… he begins by saying something like “I’ve tried all the standard dog training methods with no success, like screaming, beating, etc.).

So, yes, I have spent decades advising against people “putting responsibility” onto dogs for the dog’s behavior in most contexts, when all that did was befuddle or frighten an already confused dog.

And yet, sometimes basic rules are made to be broken. I’m reminded of my favorite line from the movie Babe, in which the barnyard animals discuss breaking into the farmhouse. Someone—the horse, the cow?—says “We barn animals can’t go into the house. That’s the rule.” The duck responds “That’s a good rule. I like that rule. But this is bigger than rules!”

Sometimes, rules are indeed made to be broken. In my experience, the basic rules like “don’t repeat a command” and “forget about whether your dog ‘knows’ what she should do” are essential to beginning dog trainers. The rules are there for a reason—to help people avoid common mistakes that at best lead to a confused dog, and at worst destroy the relationship between the animals at both ends of the leash. But perhaps, in some contexts, breaking a basic rule could be the best thing you could do IF a set of important conditions are met.

Those conditions are best understood with the example from the sheepdog clinic: Maggie and I were working on driving (the sheep away from me) at the clinic, and while doing so, Maggie kept creeping to the right and moving the sheep off the line I wanted her to drive the flock along. Each time she shifted right, I gave her a cue that put her back to the left where she should have been. After several repetitions of that, Patrick suggested that I stop ‘fixing’ it, because Maggie already knew what she should have been doing. “She knows what she should be doing,” he said, “she just rather not do it. Rather than telling her what to do, why don’t you just communicate to her it’s her job to ‘fix it,’ not yours?” And so, I said “Maggie!” My voice was quiet, but nonetheless expressed frustration. “What are you doing?!”

Maggie stopped and turned her head to look at me. She then put herself back in the correct position, and drove the sheep in a gorgeous, smooth line exactly where I wanted them to go. Ah. Interesting. I didn’t fix it, she did.

Of course, in one sense, I simply gave Maggie a verbal correction (essential in training sheepdogs, more on that in another post if you are interested) for her behavior, and she stopped shifting to the right, the side that she had preferred because it was more like following the sheep rather than taking charge of them. However, what’s most relevant to this discussion is that I was not telling Maggie what was “right,” but rather, telling her it was her job to figure it out. “She knows what she should do, Trisha,” Patrick said, “she just doesn’t want to do it.”

Patrick was right about Maggie. She knew exactly what needed to be done, and began doing it as soon as I called her on it. But… and here’s the kicker: How does one know when a dog “knows?” Look at all the trouble people get into thinking that their dog “knows” better? Visions of the viral video of the hapless Retriever, Denver, falsely accused of stealing the kitty treats come to mind. The perception that dogs “look guilty” over some perceived misdeed has been thoroughly negated by researchers like Alexandra Horowitz and Julie Hecht, whose research showed that a dog’s “guilty look” had nothing to do with his actions, and everything to do with appeasing an owner.

I’ve thought long and hard about this (and discussed it with some wise and experienced trainers, thank you all), and come to the conclusion that “breaking the rule,” and assuming that Maggie did indeed “know” what was right and what was wrong worked because: 1) She’d proven to me over and over again that she understood the concept of taking her own initiative to hold the sheep on a line that I established, 2) Taking charge of a flock of sheep is something she was bred to do, and dogs like her are actually much better than us at “reading the sheep,” and knowing what needs to be done, 3) Patrick has had decades of experience training working sheep dogs (he won the Nationals with Maggie’s father, Riggs) and if anyone would know when a dog “knew” what to do, it would be him, and 4) I tried it and it worked perfectly and instantly.

If similar criteria can’t be met, I would argue that one should never assume a dog “knows” what is “right.” But in this case, breaking the rule was the right thing to do.

The purpose of this rather long introduction, (apologies), is to ask you, dear reader, what basic dog training rules you think can be broken by more experienced trainers, and when and why. I’m all ears.

[Dece 4, 2015. I’ve added this addendum, based on the great discussion that has followed in the comment section: Oh how I love these discussions! Because of them I had an insight this morning while playing fetch with Maggie. I was continuing to think about my “What are you doing?” to Maggie while practicing driving, and had one of those great Ah ha! moments. First, it occurred to me that “asking Maggie to take responsibility” was similar to waiting for a dog to perform the right action from an operant perspective. Think clicker training, while you wait for a dog to move the correct way, rather than luring them. In both cases, we are asking the dog to figure it out what “right” was for itself. The primary difference between what I was doing with Maggie and waiting for the dog to do what you want in clicker training, is that rather than saying “wrong,” which many use to communicate to a dog who might need some direction, I said “What are you doing?” What is most relevant between those two cues is the tone. If I think a dog needs help while clicker training I’ll say “wrong” in as neutral a tone as I can. When I said “What are you doing?” to Maggie, it clearly had conveyed some frustration. (But keep in mind, it was ridiculously mild. She was working 100 yards away, and I didn’t yell it. I just changed the tone of my voice.) Because it wasn’t said in a neutral tone, I think it qualifies as a correction, which is where trick training and sheep herding do indeed diverge. Working sheep the way a dog wants to is the most reinforcing thing the dog can do, at least in the short term. You simply can’t let the dog do what it wants, like you can with trick training, and wait for the correct behavior. The dog is already being reinforced with something more powerful than anything in your repertoire. So, yes, sometimes mild corrections, like I gave to Maggie, are essential. But the motivation of my words was to communicate to Maggie that 1) what she was doing was wrong, and, 2) she needed to find ‘right’ herself, rather than me ‘luring’ her verbally into it. In both cases, the point is that it is better for the dog to figure it out for themselves, rather than you ‘fixing it’ (including using a lure). Make sense?]

MEANWHILE, back on the farm: Maggie and Willie had a blast yesterday playing with some new friends. Maggie had never met anything resembling a Bouvier, and initially lept off the edge of sanity into a full out panic when she saw her, but soon was playing “race horse” with Ready (Bouvier), Nellie (adorable Standard Poodle, not pictured) and Willie. Here they are about to begin another race around the pasture. Could Maggie look happier? 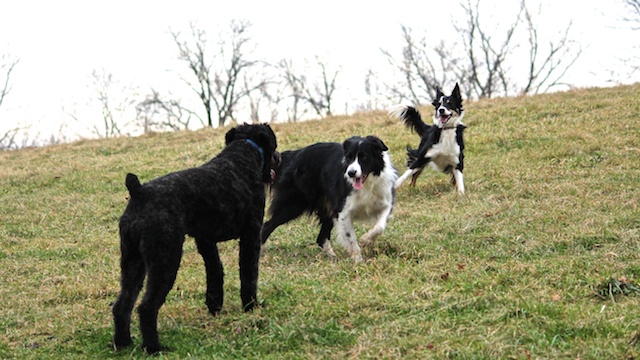 Willie hasn’t gotten to run like this for months, but his shoulder and paw both seemed healed up enough to let him run for awhile. He was so happy, and I was full of gratitude that he could run with other dogs again. He did go on leash after I thought he’d had enough. But oh, they had fun, and we had a blast watching them. 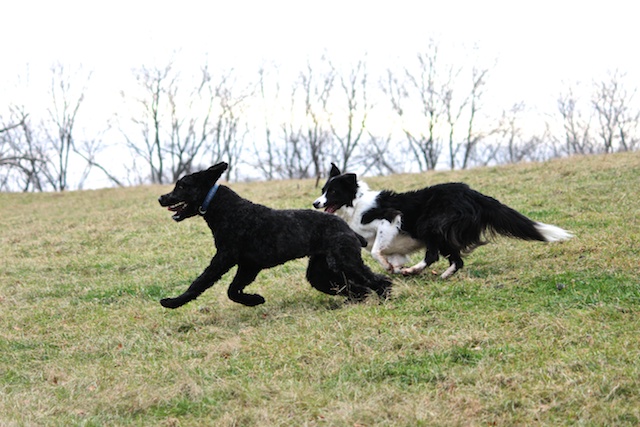 Maggie would like to thank the deer hunters who couldn’t find the buck they’d shot last weekend during hunting season. We found it beside our wood’s trail, long after the coyotes, raccoons and possums had eaten up a good deal of it. (Thank heaven for obedient dogs, who dropped the rotting strips of deer hide out of their mouths when asked.) We’ve avoided the trail for the last week, but Jim sawed off the antlers and Maggie is very, very grateful. 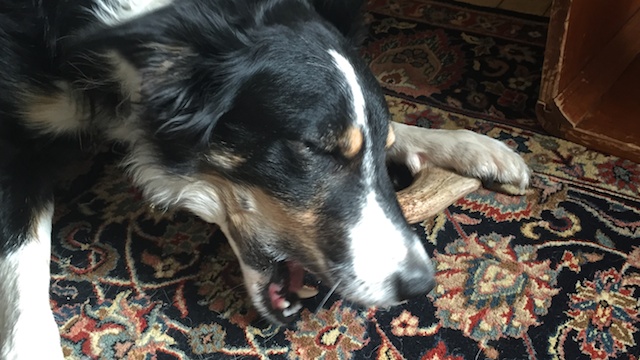