Welcome to an ongoing inquiry about the behavior of people and dogs.
Blog Home >> Animals and the People Who Love Them >> Willie Learns Nouns! Maybe…

There’s always a silver lining, and that was true of our endless winter here in Wisconsin. Given the high snow depth and the low temperatures, I couldn’t always get myself out for a long walk every day, and so Willie and I played a lot of games indoors and we both ended up learning something interesting. I decided in December that it was time to try, again, to teach Willie the names of some of his toys. If you’ve been reading the blog awhile you may recall my writing in Feb of 2010 about Willie’s inability to understand words as nouns in What do words mean to dogs? and in January of 2011 in Could You Learn 1022 Nouns?  As I mentioned in those articles, Willie appeared to see most verbal cues as verbs, with a few exceptions of living things like “sheep” and “Jim.” But every time I tried to teach him names associated with his toys, like “ball” versus  “frisbee,” he became confused. So much that, if I didn’t drop it right away, he appeared to be truly distressed about it.

Willie’s injury and subsequent surgery in 2o11 meant no play for over 14 months, and so it wasn’t until this winter that I started trying again to see if  Willie could learn to associate names with objects. The answer is yes, he can. Sort of. Maybe.

I’m glad I’ve cleared that up. I’ll describe what is happening and leave it to you to decipher what is going on. First, let me explain where we are now. Willie associates three different words with three different toys. If we say “ball,” over 95% of the time he will go and get the object we designated as “ball” and bring it to us. (“95%” of the time is an estimate, I am far too lazy at night to take actual data here. But I can’t remember him not retrieving the ball when asked in the last 2 months, so I’m going with 95%.) This, I should note, is one of his absolutely favorite toys, which is partly why I chose it.  It was also the first toy we began consciously naming this winter. The next toy we taught him to name we called the “fris,” and it is another one of his favorites. (And it is incredibly sturdy, which is one of the reasons we sell it on the website, it’s call a JR ring.) He got very good at fetching the “fris” or the “ball” until we lost the “fris” and can’t find the #&^% thing anywhere. Sigh. I’m tearing the house apart this weekend because I really, really want to see how he will react to it. (If I can’t find it I’ll bring home a new one. It’ll be interesting to see how quickly he learn to associate the word with a new version of the same object.)

I thought that teaching a third toy would be most difficult (it’s one thing to distinguish between two things, another altogether to switch from “this or that?” to “there are multiple things with names…”. For that reason I was extremely cautious about adding in the third toy, which we now call “red red.” We’ve worked with it for about 5 or 6 weeks, I’d say he is about 85% accurate when asked to get it. I’ll explain how I’ve been working with Willie on this in a minute, but here is a pictorial from this morning: 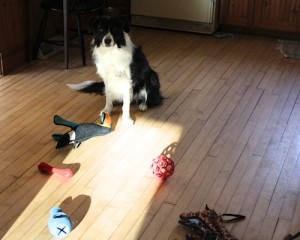 First I asked him to sit and stay while I got ready with the camera, a completely different context than our usual way of playing the game. You can tell by Willie’s face that he looks a bit… what? Unsure 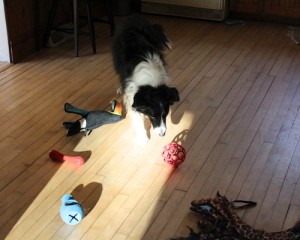 Then I said “Ball” and he went right for it immediately. He picked it up and brought it to me. 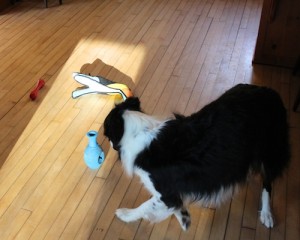 Then I said “red red,” which is the bone-shaped, red toy on the left. (Of course it is only red to us, not to red-green color-blind dogs.) He  did not go to the correct toy at first, he first focused on the blue vase-shaped one. 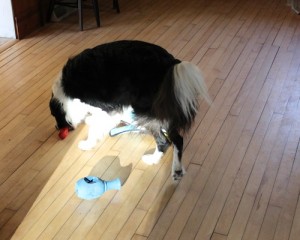 I stayed still, and after hovering over the blue one, he corrected  himself and picked up the correct toy.

This all looks really good, except began again and said “red red” and he looked completely confused and went immediately to the blue toy. I suspect his response was a of function of 1) everything about our routine was different (different room, me with a camera (the shutter noise seemed got his attention every time), much less play after getting the right toy) and 2) Willie is ridiculously hyper-sensitive to virtually everything in his environment, and is easily thrown by anything that confuses or bothers him and 3) he is not as sure about “red red” as he is “ball.”

Reasons aside, it is clear that Willie still struggles a bit with “naming” objects. (Or does he still think of them as verbs, as in “go get your ball”?) But he has made huge progress, and we have great fun every night now playing our “object” game. Here’s how I’ve been working on it, for those of you whose dogs have struggled like Willie. (I know that lots of dogs catch on this easily, but not my Willie boy, and not lots of other dogs as I understand it.)

First, years ago, I tried doing an operant conditioning paradigm in which two toys sat between me and Willie and I clicked and gave him a treat if he touched or picked up the toy I was naming. It was disastrous, in that Willie never could figure it out, even when I switched to playing with the toy as reinforcement. Willie just could never figure it out; he seemed to run through one hypothesis after another: “It’s the last one she touched!” “It’s the one on her left!” but none were right and he looked so miserable I dropped it altogether after a few weeks.

This winter I tried a completely different tack. First, even though we would often say “Go get your ball,” (or “Find your…”) I noticed that Willie attended to “Go get…” and little else. So we began picking up his favorite toy and saying its name whenever we handed it to him. After playing awhile, we would ask him to stay, then toss the toy and say “Ball!” and nothing else. When he went to get it we would clap and then play with it for a long time. We did this for at least six weeks before we even thought about adding the second toy (the “fris). At first when we’d toss the fris Willie hesitated and looked back at us. We’d encourage him, repeating the word in a happy voice, and within one evening Willie was enthusiastically going after the fris when we said the word. We played with it by itself for at least 3 weeks. (I should add that we’d play with many of his toys when we weren’t training or naming, but we were very careful to only use “ball” or “fris” as part of a structured training session.

After three weeks of that we began to say “ball” or “fris” when both objects were in plain sight. He absolutely made mistakes, but we responded with a quiet “uh uh” and repeated the object we wanted. The correct choice got a celebration and lots and lots of play. We added a third object in before we lost the “fris,” the “red red” bone-shaped toy that you see above. (I didn’t want to call it “bone”  because bone and ball start with the same sound and my dissertation research found that dogs were responding to the first 200 milliseconds of a verbal signal.) We played with “red red” for at least two weeks before beginning to ask him to choose between it and “ball.”

Most importantly, we went INCREDIBLY SLOWLY. By that I mean I’d ask Willie twice in one night to make a choice, and then never again the entire night.  We’d play with objects, but I wouldn’t use the name and ask him to make a choice. I might ask three times the next night, but not at all the night after that. We thought nothing of mistakes, but always made it fun and easy. I suspect that the key with Willie is to never put him into his state of “Oh no! That was wrong! But I don’t know why! Oh no! Now what do I do?” (And yes, I meant every exclamation point. I suspect that is how Willie thinks about everything.)

I’d love to hear from others who have hyper-sensitive dogs who have worked through similar issues. The whole ‘what do words mean to dogs?” issue continues to fascinate me, especially with dogs like Willie take being “right” so much to heart. Meanwhile, it is great fun to have a new game to play with Willie. We won’t be able to work sheep for awhile once all the lambs are born, so finding other ways to play feel extra important, especially after a long winter.

MEANWHILE, back on the farm: Spring lambs have arrived! Here is one of Buttercup’s twins, out of the smaller pen for the first time yesterday and exploring something we call sunshine. There is still (!) ice and snow on the ground in places, including beside the barn where Willie runs and is in danger of slipping and re-injuring himself (can you feel me stop breathing?), but the days are warming and the ground is thawing out and there are bulbs emerging from the sponge-like soil.

I’m not going to write too much because one of the ewes is days and days over due and I’ve been pacing the barn  about it. I’m off to there now, maybe there will be two more lambs in the barn? Cross your paws for us all (hooves?), one ewe down, six more to go. 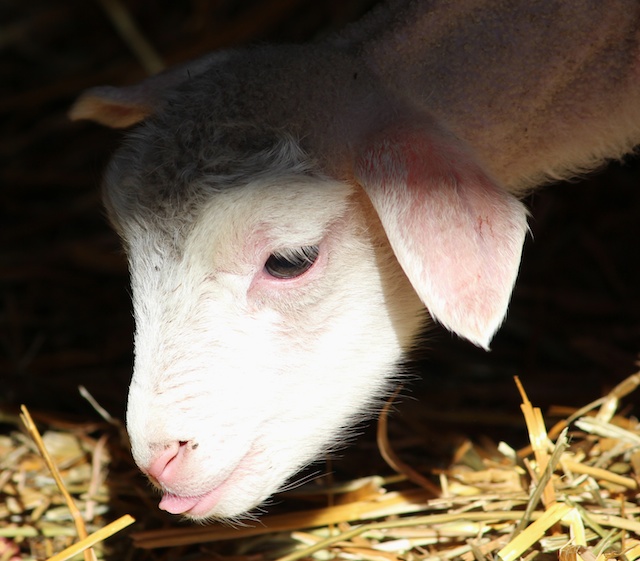