Welcome to an ongoing inquiry about the behavior of people and dogs.
Blog Home >> Animals and the People Who Love Them >> Willie & Sushi (and Hope) Update

A reader asked for an update about Will and Sushi, so I thought it was time to fill you in on how it is going. I’m happy to report that things are going extremely well. (Whew!) The entire story would be a chapter in a book (and probably will be!), but here’s the summary:

Problem: Willie stalking Sushi the cat. As I said in earlier posts, this is very different from “chasing the cat.” Cat chasing can be a serious problem, don’t get me wrong, especially if it is predatory and not initially motivated by play, but “strong-eyed” herding dogs who automatically go into a stalking posture around a cat are a real challenge. Using positive reinforcement for, say, looking at the cat and then turning to look at me for a treat or a toy wasn’t working.

The primary problem is that once a strong-eyed dog makes visual contact with an animal it sees as something to be herded, it is extremely hard for the dog not to begin stalking. I’ve read so many books that describe Border collies as “mesmerizing their prey” with their intense stare, but in truth it’s the exact opposite. It’s the dog that goes into a trance.

Super “strong-eyed” dogs are not favored by the top handlers, because they literally become “stuck” once they make contact with the sheep. They just stop moving altogether and stand like statues while you whistle yourself silly trying to get them to move. I’ve worked on that with Willie, having been encouraged by Alisdair McRae  to keep Willie moving and simply not let him stop or lie down for months and months during his early training. (I used to call Alisdair the “Tiger Woods of Herding” but it no longer seems like the compliment it is meant to be!) Willie still can get stuck sometimes, but it doesn’t happen very often at the farm and I’m grateful for the advice that Alisdair gave me early on.

But that strong-eyed predisposition made working with him and Sushi especially difficult. All the techniques you would use (and I did use to cure  him of bark/lunging at other dogs) don’t work in this situation. Teaching him to look at the cat on cue made things worse, and teaching him to get a toy as soon as he saw the cat didn’t work either. Once he saw the cat, he was lost in stalking-land. I tried telling him to lie down every time he saw the cat, but that just kept him in herding mode. (You can read more about what I’ve worked on in Willie & Sushi Part II, 12/9/2009).

We made big strides when I switched to asking for a Sit rather than a Lie Down (not a posture a herding dog takes when working, unless they are a tad confused). Once he had sat down, I reinforced him with play. That helped a great deal. But the next break through was serendipitous: I sent Sushi to a boarding kennel for a few days when a cat-allergic house guest came to visit. Sushi was gone for 3 days, and when she returned I made a decision to use (cover your ears here if you believe in 100% positive reinforcement and consider even mildest of punishments a sin) positive punishment when he focused on Sushi. Three times I threw something soft in between him and Sushi when he lowered his head toward her (twice it was my bait bag full of treats!), then we ran in the living room and played with his toys. Ever since he has been great. I think the combination of the work we’ve done before, the break from having Sushi in the house and starting over anew by stopping the behavior before it could start again was the key.

Granted, it  doesn’t hurt have a puppy to play with to keep his attention off the cat, but the problem was handled before the puppy came. Willie still focuses on Sushi if he sees her in the window, but as soon as she comes in he turns away from her and grabs a toy. GOOD BOY!!!

None of this would have worked if I hadn’t had a good foundation laid beforehand, but it sure feels good right now. Of course, it’s also summer and Sushi is outside a lot, so the big test will come next winter, but right now the Willie/Sushi problem is history. Of course, now I’m working on teaching Hope not to chase the cat (more on that later, but it’s going really, really well…).

MEANWHILE, back on the farm: Will and Hope are playing beautifully in the house together, lots of tooth fencing and wrestle play. Every once in awhile Will seems to get a tad irritated and end the play session with a snap and an offensive pucker, but it’s rare and probably appropriate, given that shark-tooth Hope isn’t always mindful of the arsenal he is carrying around in his mouth. I also am quick to let Will go upstairs to take a break if he tells me he is ready, and I suspect that makes a big difference. Who doesn’t need a break from a puppy every once in awhile?

Their play outside is still driven by Willie’s nerdy and rude herding behavior. He just can’t figure out why Hope doesn’t want to play “You be the sheep and I’ll smash into you every time you move forward!” Sort of like the big brother who wants to tie his little brother up to a tree so he can play pirate and his little brother plays the captured victim. But Hope is figuring out he can play as long as he has somewhere to hide, like the edges of the wading pool: 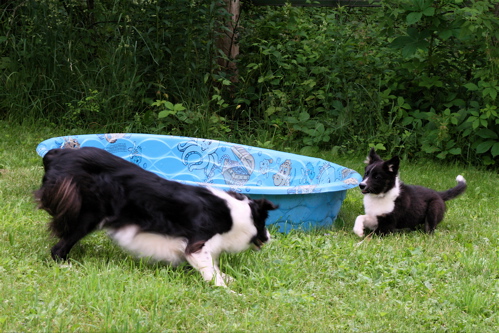 The next photo is Will and Hope in a ‘road training’ session. Hope is learning to automatically lie down every time I walk toward the road. He is not allowed to go within 30 yards of the road, and he is learning to lie down if I move over that invisible barrier myself. This does NOT mean that he wouldn’t go to the road if I was behind him (on the house side rather than the road side) and someone appeared on the road that he’d like to meet. That is a completely different concept, and one we’ll work on once this stage has progressed. This is his 3rd session, and he will now lie down to a visual signal and stay until I come back parallel to him. Once I do, he gets enthusiastic praise, belly rubs (he LOVES them) and sometimes a piece of the cheapest steak I can find in the market. I also think it helps greatly that Will knows the drill and he has big brother beside him doing the right thing. (It’s very controversial whether dogs can truly ‘imitate’ others, but I do believe that at minimum it helps in the sense that Will is not moving around causing a distraction, and I do wonder often if Will’s behavior doesn’t also directly influence Hope’s… Food for thought.) 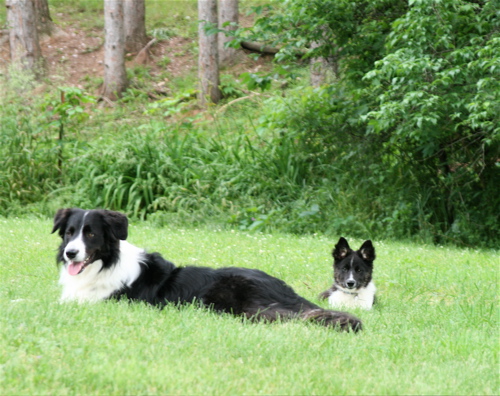 « Have an Example of a Creative Reinforcement?
Chase This, Not That! »