Welcome to an ongoing inquiry about the behavior of people and dogs.
Blog Home >> Communicating with Dogs >> Working on Sound, or, Making Better Noises

A dear friend (thank you Kathy!) sent me an autographed copy of a wonderful book, The Great Animal Orchestra, by Bernie Krause. Subtitled Finding the Origins of Music in the World’s Wild Places, the book is a “. . . travelogue of sound, based on a lifetime of study, (and) will leave you hearing–and seeing–nature as never before.”

What perfect timing!  Earth Day is this coming Thursday, April 22nd, so it’s a great day to think about the chorus of sounds that surround us in nature. Earth Day encourages and exhorts and begs us to pay attention to Mother Earth, and focusing on the natural soundscape is a great way to do that. And what a great time of year to do so in the northern hemisphere–the air holds a symphony of signing birds right now. What a joy.

In addition, our first sheepdog competition will be in two weeks, and time will tell if my work this winter on improving my whistle signals has paid off. (More on that later in this post.) And so I find myself focusing on sound more than usual, the topic of this week’s post. It’s a bit of a potpourri, in part because it’s such a huge topic, and in part because, well, that’s where my head is right now. 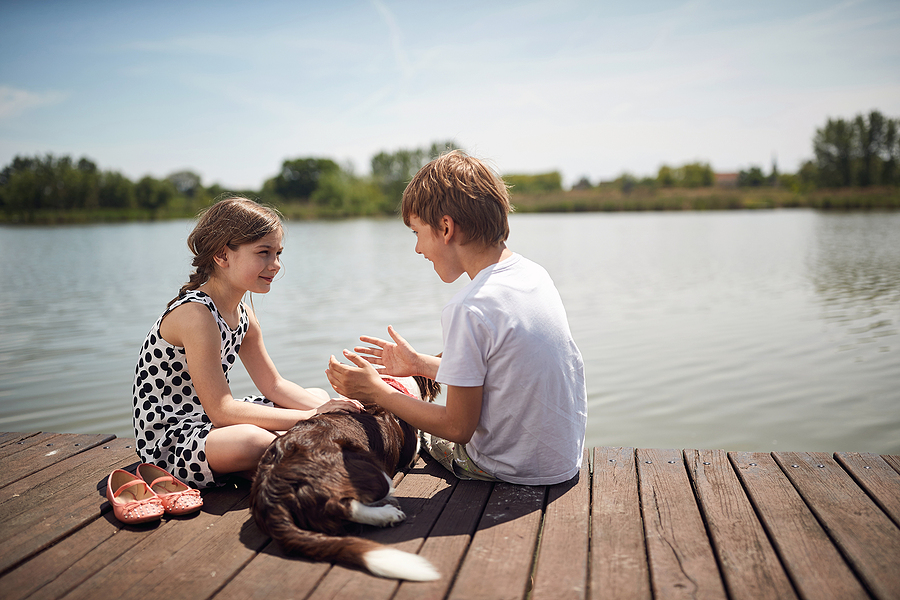 First off, Krause’s book reminds us that we primates are so fixated on vision that sound designer Walter Murch called sound “the shadow sense” –one that exists all by itself in an ethereal, amorphous realm.We describe sounds with our visual sense, as in, “I see what you are saying.”

It’s such an irony; we humans are obsessed with language, and our ability to use it, and yet often clueless about what we are actually saying or hearing. In the chapter “Talking to Each Other,” I write in The Other End of the Leash about a time I called my Great Pryenees, Tulip, away from a dead squirrel by saying her name, and only her name. As if that would communicate to her what I wanted her to do. I finally came around and used sound to let her know what I wanted, and she complied.

As I concluded: “She did too [come when called], as soon as I got my act together and told her what I wanted. Since I’m an Applied Animal Behaviorist, a professional dog trainer, and my PhD research was on acoustic communication between trainers and working animals, you’d think I’d have this down by now. But there’s a catch: I’m a human.” And we humans are so very often clueless about the sounds we make.

What if this week was the week that we all focused anew on how we use sound to communicate to our dogs? I’ve certainly been focused on one aspect of that–I mentioned working on the whistles I use to cue the dogs when working sheep. I have made some progress, but the fact remains that I am a lousy whistler. Understandably, I get no small amount of teasing about it, given that my dissertation research began with an analysis of the structural components of the very same sounds. However, as I lamely try to explain, analyzing something doesn’t make you good at doing it. I’m like the sports physiologist trying to do gymnastics herself, rather than studying how fast-twitch muscle fibers relate to doing a cartwheel on a balance beam.

Here’s an example of what I’m working on:

My biggest challenge is making the first notes between Come Bye (go clockwise) and Walk Up different enough. You can even see that at the very beginning of the video when Maggie hesitates for a split second. But there’s more: I am working on making the whistles “sharper” (note the visual description!). And being consistent. And being loud enough to carry 400+ yards. Actually, full disclosure, I find it miraculous that the dogs ever actually know what I’m trying to say.  All I can say here is: Wish me and my dogs luck in two weeks. We are going to need it.

Whistles are one thing, but like everyone else, I talk to my dogs all the time. The question is, how clear are we from the dog’s perspective? It’s obvious that acoustic communication is a topic I like to think about, given that there are 21 articles in my website’s The Learning Center on Acoustic Communication. The article’s range from “What Do Words Mean to Dogs?” to “It’s How You Say It” to “Quiet Please!”. 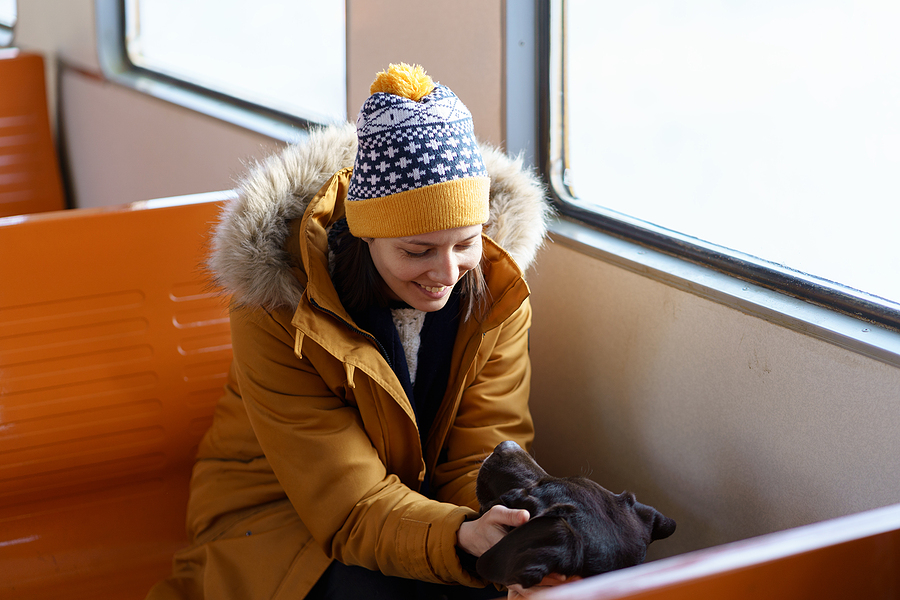 We can’t all focus on everything at once, however. There’s a long list of acoustic tweaks most of us could work on:

*** Be (more) consistent. (Inconsistency is the hobgoblin of human speech. And a reason to use the word, “hobgoblin,” a great set of sounds if I’ve ever heard them.)

*** Less is more. (Talk less and your dog will understand you better.)

*** Pay attention to pitch. (All my BCs respond to “That’ll Do” said in a low voice better than if in a normal pitch.)

*** Confirm definitions. (Does your dog define “Sit” like you do? What does she do if she is sitting and you say sit?”)

*** Amplitude is Not Your Friend. (Do you get louder if your dog doesn’t comply? You know that people increase the loudness of a phrase if it’s not understood, right? Doesn’t work with our species, so . . . )

*** What’s Your Dog’s Soundscape? (How much noise does your dog have to put up with in your home?)

I’m going to work on pitch. I have a high voice that conveys the authority of a baby squirrel.

Sadly, I am not as adorable, and I try not to squeak when I eat. (Note that I used the word “try”.) That said, this week I’m going to pay attention to the pitch of my voice. Low voices convey calmness and confidence, so that’s what I’m going for before the sheepdog trials. Calm and Confident, yup, that’s me. No idea who that person is who walks up to the post with her stomach churning.

What about you? Inspired to work on the sounds that you make to your dog or dogs? Don’t hesitate to add items to the list above too, I’m sure I’ve left something important out.

I’ll leave this section with a fun fact from The Great Animal Orchestra: In search of sounds from tide pools to record, Bernie inserted his microphone into the center cavity of an anemone, which expelled it with “a couple of loud, obscene grunts”. I’ll leave you with that  . . .  uh, “image?”

MEANWHILE, back on the farm: Skip and Maggie are loving the cool weather. I’m glad it’s not as hot as last week, 78 degrees was about to fry our hundreds of daffodils. 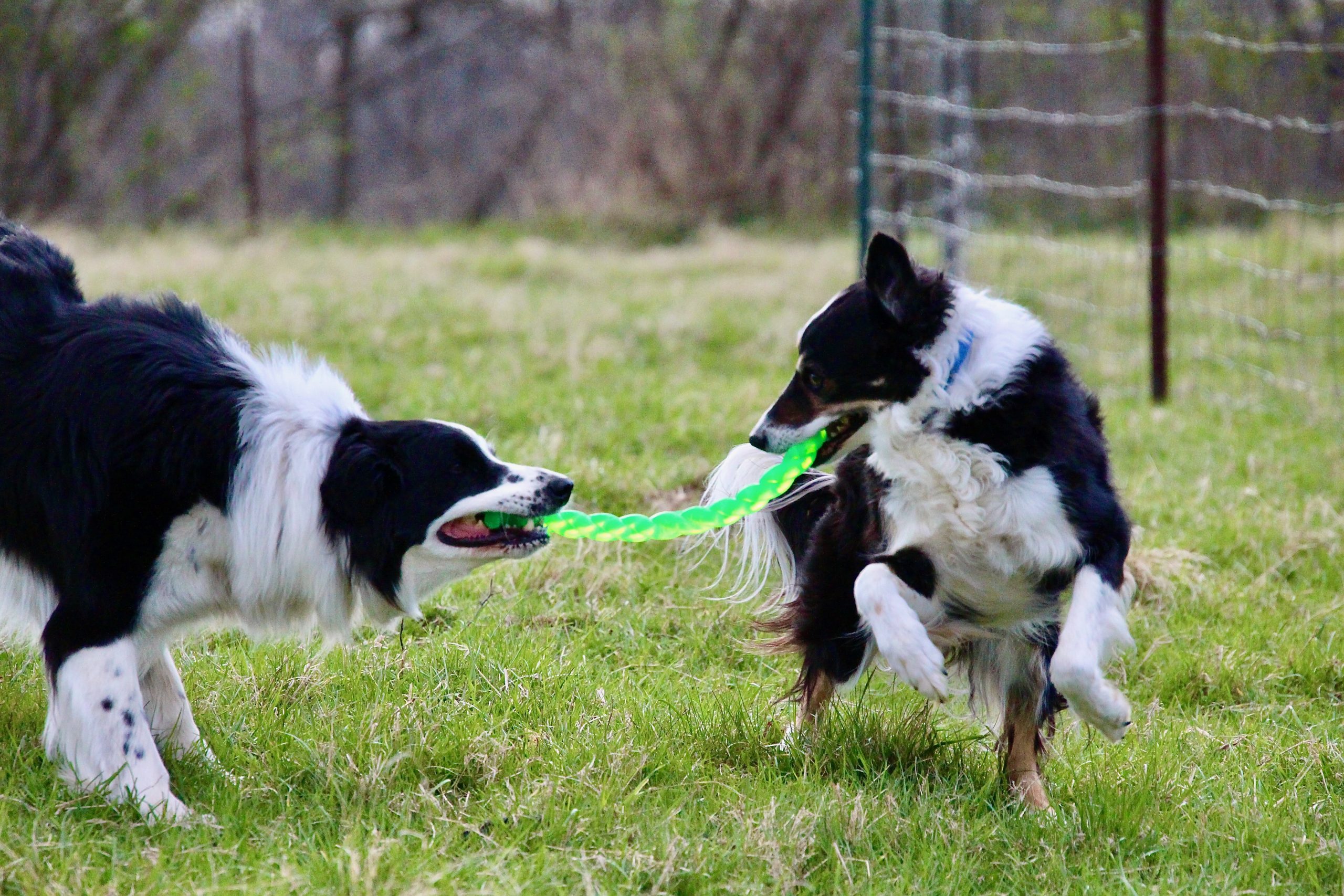 However, there are limits. I’ll have a lot of tender plants to cover up the next three nights, given the forecast. Buckets and towels are a northern gardener’s most important tools this time of year; here are some at work from a few days ago, covering Bleeding Hearts: 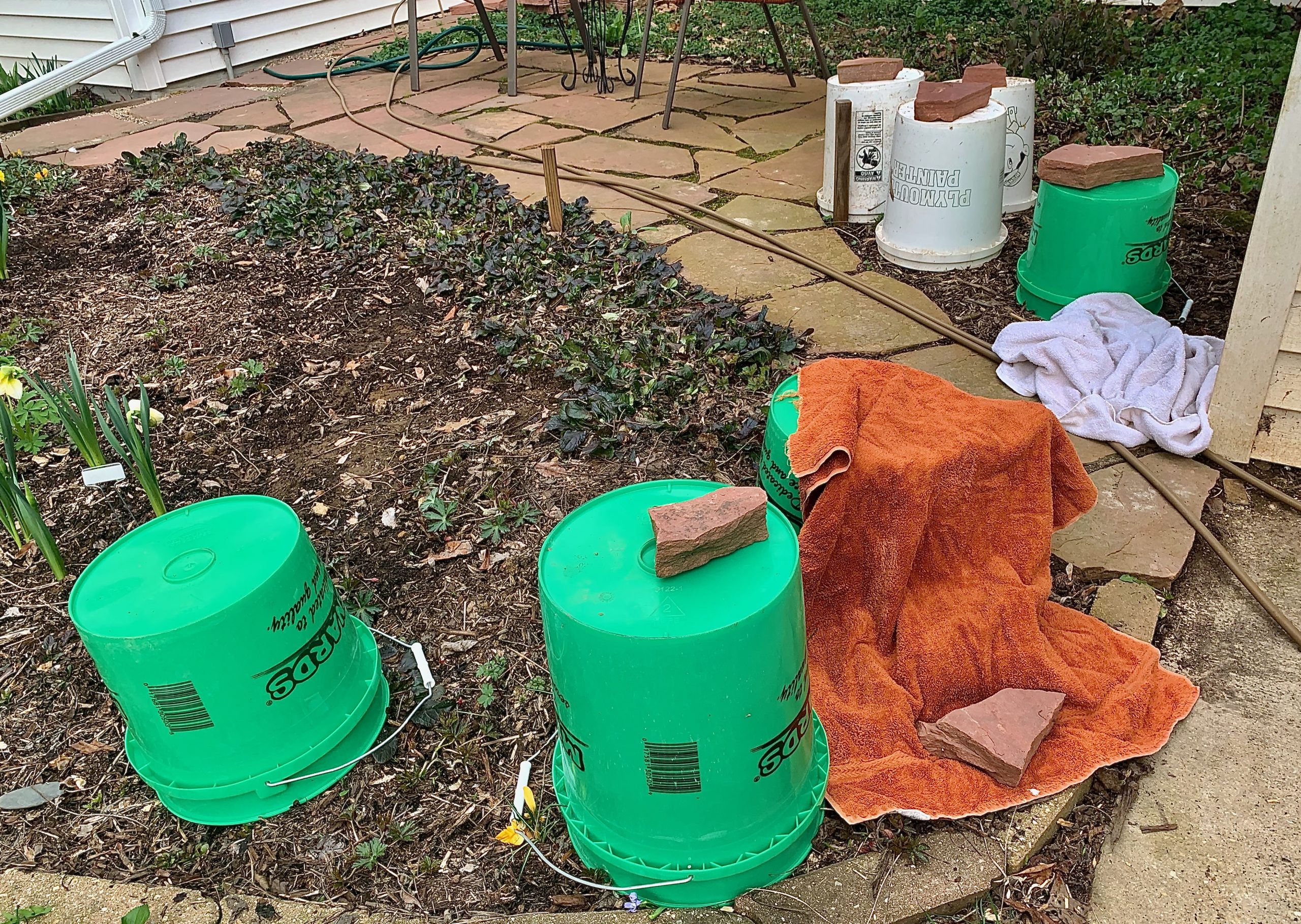 It will probably be 25 or so on Tuesday night here, so we’ll lose many of the daffodil flowers. I’ll be cutting a bunch of them on Tuesday morning, and savoring them as often as I can until then. I do hope the crabapples and plums don’t get their blooms killed, but, that’s April in Wisconsin, so we’re used to it. Below are some of the daffs on Willie’s grave: 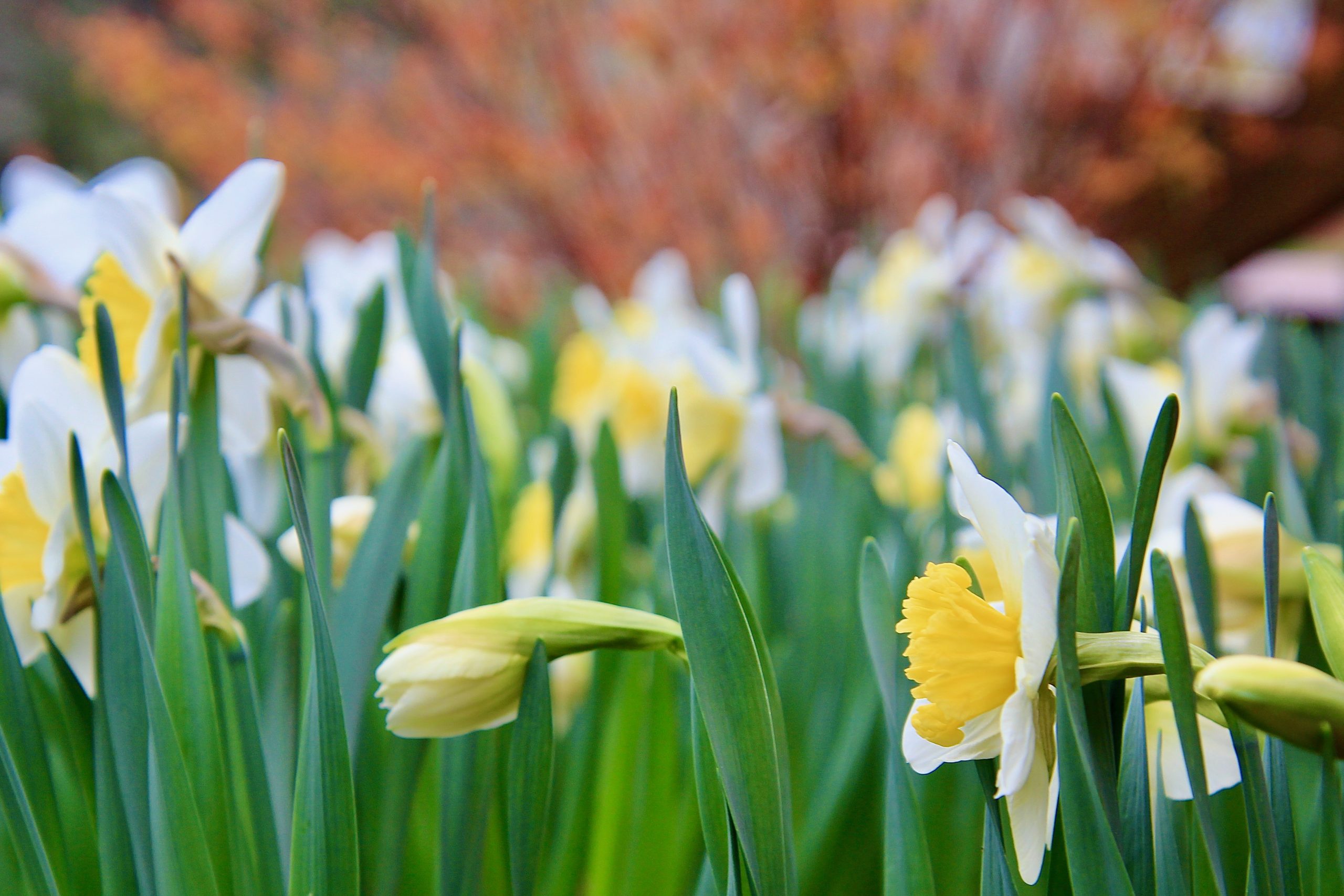 Nellie, of course, had to photo bomb the photo: 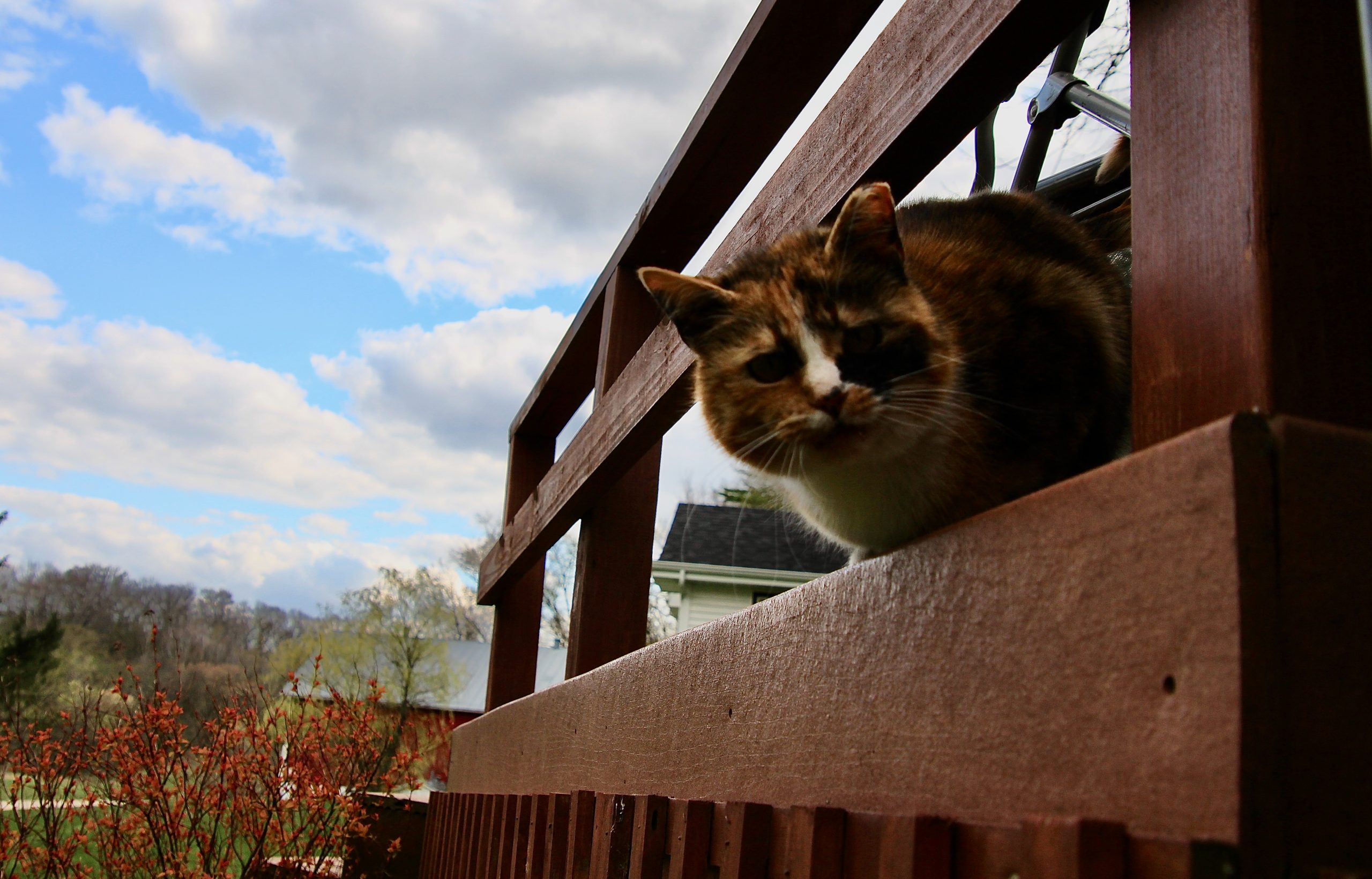 Speaking of the sounds around us, we are surrounded by singing Chickadees, Song Sparrows, Nuthatches, Tufted Titmice, Cardinals and a host of other birds competing for territory and mates. My favorite this week is the woodpecker who is channeling Mike the chimpanzee, who rose to dominance by banging metal cans together. Our woodpecker (Downy? Hairy? Pileated?) has discovered that he can make an especially loud racket by drumming on a metal sign across the road. What a guy! I’ll keep my eye out for swooning females.

What about you? What’s in your soundscape this season? Have I inspired you to think about one aspect of how you use sound to communicate this week? Keep us posted, I’m all eyes, well, ears, well, you know.

« Chirag Patel and the “Bucket Game”
Skill, Natural Ability and our Dog’s Happiness »