Welcome to an ongoing inquiry about the behavior of people and dogs.
Blog Home >> Animals and the People Who Love Them >> Conditioning a Dog to a Muzzle

Awhile ago I saw a small dog hit by a car, whose occupant drove away as if nothing had happened. The little white dog lay on his side, stunned and bleeding. It was clear when I got close that the dog’s leg was broken and he needed to get to a veterinary clinic right away. When I moved my hand toward him he panicked and tried to bite me; a reasonable reaction given how painful being moved must have been. I had anticipated that might happen, so I had reached out him cautiously. At the first sign of an active set of teeth, I ran back to the car for something that would allow me to transport him safely. I had a leash and towel in the car, and so I attached the leash to his collar, and used the length of the leash to bind his mouth. We were in the middle of a busy street, so I moved him as gently but quickly as possible onto the towel and got him to medical care. (Where, I’m happy to say, he was re-united with his owner, treated and recovered beautifully.)

Let me preface the rest of what I’m about to say by noting that I am usually worthless in emergencies. When I walked outside of the McConnell Publishing office a few years ago and discovered flames shooting out of the wires going into the building, I ran inside to “save” my staff, arms waving, yelling “Fire! Fire!” Nothing particularly wrong with those words, but my staff could barely understand what I was saying because I was shouting like an idiot. They stood stunned, asking “What? What’s going on?” I could have said, in a calm voice, “Okay, there is a fire on the outside of our building asnd we need to get out right away,” but no, between the arm waving and the shouting my message was pretty much incomprehensible. I confess to such foolishness because on rare occasions I do seem to be able to cope in emergencies, but usually only because I am prepared for them.

Which is why I want to write about preparing for emergencies by 1) conditioning your dog(s) to accept a muzzle, and 2) keeping a muzzle and a leash in your car if you’re inclined to stop and help injured dogs. The fact is that any panicked dog can attempt to defend itself with his or her teeth. The last thing you need to deal with in an emergency is a dog attached to your own arm, or being unable to treat or transport a dog because it has become dangerous.

Before I begin to talk about conditioning dogs to accept a muzzle, a few comments about muzzles themselves.

That said, muzzles that are used correctly can avoid a lot of heart ache. And usually, when you need them, you need them fast. That’s why I think it’s wise to condition dogs to accept a muzzle when you have time to turn it into a fun game. Here are some photos of me and Maggie indulging in Fun with Muzzles.

I started by letting Maggie take some treats from the inside of a muzzle about one size too large for her. (Not a necessary step, but a luxury for those of us with a range of muzzle sizes in the cabinet.) Then I held a treat, shown below, such that she’d have to put her muzzle through the muzzle to get the treat. (Muzzle through muzzle. . . an awkward phrase at best. I didn’t think ’til now about the strange title we have for the device that goes over a dog’s muzzle. It’s as if we called gloves “hands”.) 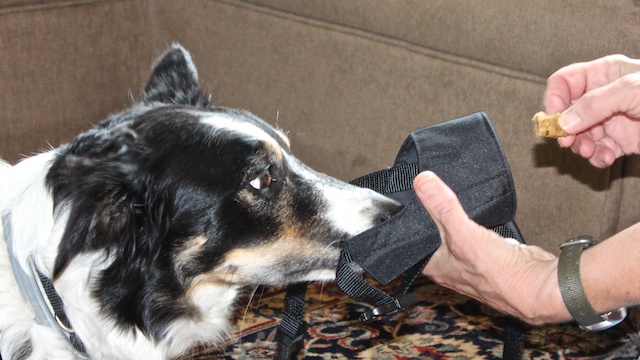 But I digress. I continued this until Maggie was jamming her nose through the muzzle to get the treat. 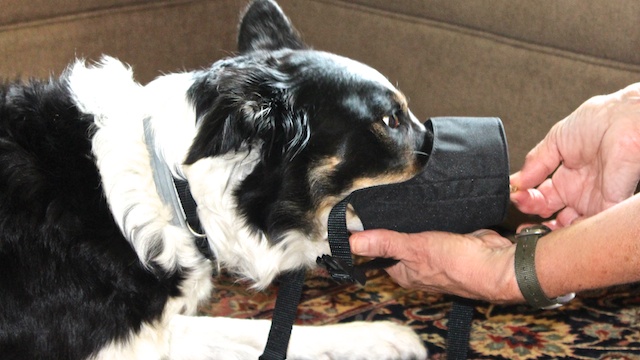 Look carefully at this photo and you’ll notice that I’m pulling down and back on the the strap on her right side, replicating the sense of pressure she’ll feel once the muzzle is attached. Maggie thought this was a great game, and didn’t hesitate to push against the muzzle to get the treat. Some dogs will be much slower at this, and that’s fine. Let them set the pace. Your goal is not to force a muzzle on the dog, it’s to condition the dog to feel good about putting his or her face into a muzzle. 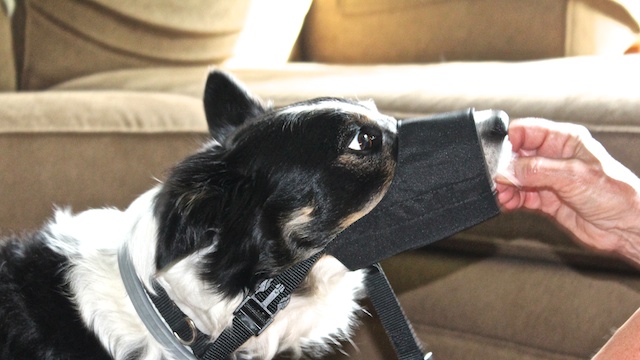 Now it’s time to connect the straps at the back of Maggie’s head. It’s great if you have someone else that can do this while you feel the dog treats. In Maggie’s case that wasn’t necessary, she was focused on nothing but getting more treats. Note of caution: You’ll note that my face is directly over Maggie’s. Would I do this to a dog I didn’t know or who wasn’t familiar with me? For that matter, would I get my face this close to the face of a person I didn’t know? Of course not . . . But Maggie and I are pals, and just as Jim and I play smash face, our dogs are comfortable with this kind of close contact. Just always be thoughtful about the social relationship you have with a dog before you decide how close to put your face to theirs. 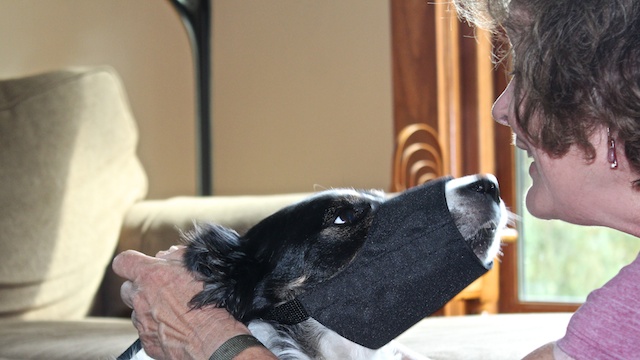 As soon as the straps were loosely attached I gave Maggie more treats. That was enough for one session. My next step is to put on a muzzle one size smaller and give her lots of treats while it’s attached. No need to keep the muzzle on for very long; your goal is to be able to muzzle a dog quickly and without resistance in an emergency. Maggie did so well that in one more session I’ll be confident that if I ever do have muzzle her, the muzzle itself won’t add to our collective trauma. Here’s hoping, that like insurance, we’ll never need to use it. 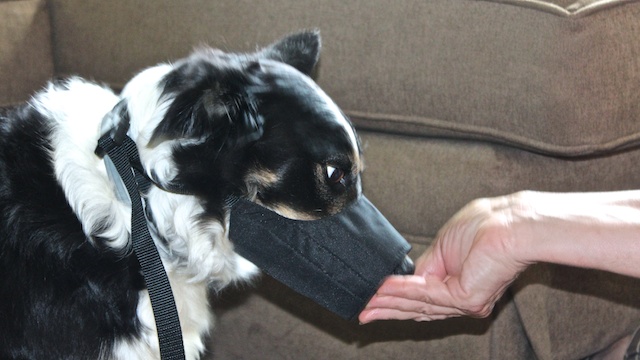 I’d love to hear if you’ve had your experiences with muzzles–good, bad or ugly, as long as we all can learn something. And if you have any stories that will make those of us who are lousy in emergencies feel any better, then jump right in!

MEANWHILE, back on the farm: It’s not a lot of fun outside right now. Beside the heat and humidity, there are clouds of mosquitoes that didn’t get the memo about the anesthetic they are supposed to inject while sucking your blood.  One of the species of mosquitoes out at the present time (we have 56 species in Wisconsin) don’t bother to disguise their bites and it feels like getting stabbed with a hot, little needle. And there another species active whose bites aren’t noticed until they feel like someone put a blow torch to your skin. I’m working on my benevolence to all living things, but have to admit I am struggling. The first frost won’t come soon enough for me.

On the other hand, the rains that have encouraged the mosquitoes have led to the greenest August I can remember. Driving around south central Wisconsin is like swimming in a palette of lush greens, luminous sky blues, and pearly white clouds. There were no clouds on this day when we walked the BCs on a friend’s lovely piece of land not too far from our farm. We stayed out of the woods, trying to avoid the bugs, and in spite of the heat and humidity, a good time was had by all. 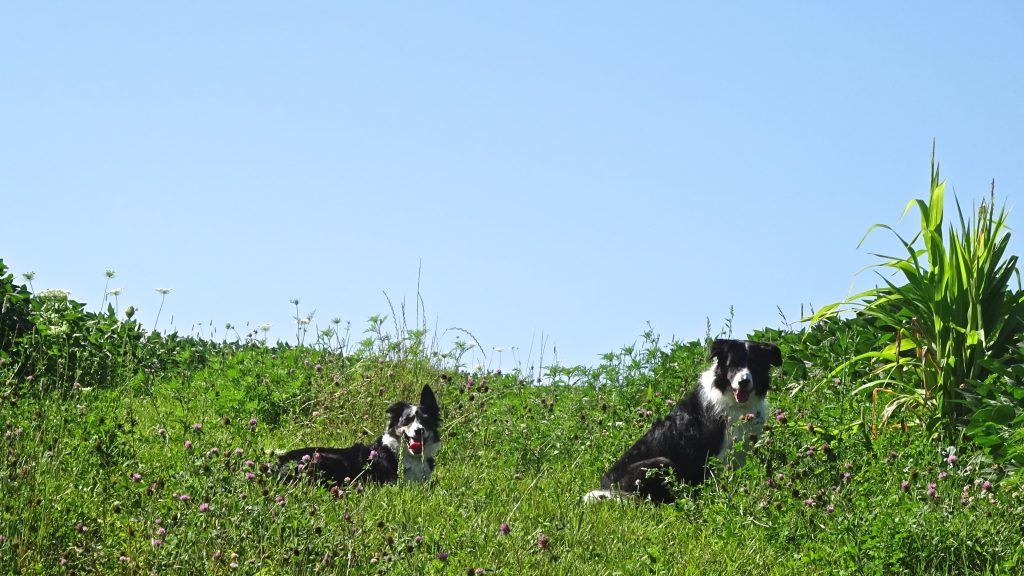 The color in the garden has shifted. The day lilies are almost done flowering, but the black-eyed susans and sunflowers are coming into their own: 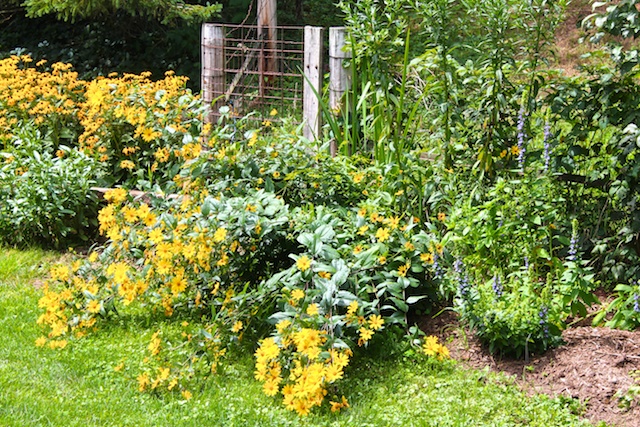 The blooming Joe Pye Weed reminded me how many insects are a welcome addition. They flowers were buzzing with busy bees, and a Monarch stopped by to drink some nectar. What a gift. 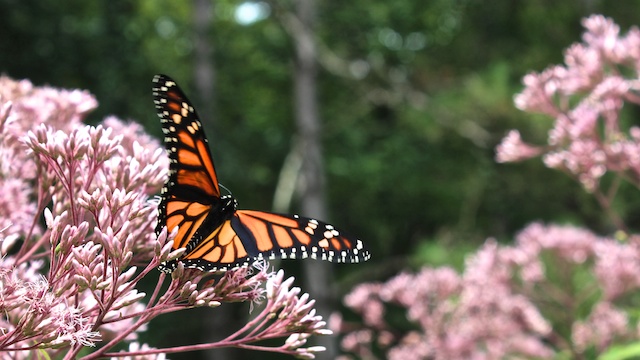