Welcome to an ongoing inquiry about the behavior of people and dogs.
Blog Home >> Animals and the People Who Love Them >> Fall Fun

IT’S ALL BACK ON THE FARM THIS WEEK: Well, not exactly, because some of the photos are from Minnesota and the Star of the North Sheepdog Trial. But first, from an evening very much at home, Jim, Skip, Maggie and I recently spent the night in our staycation farm-meets-safari tent. 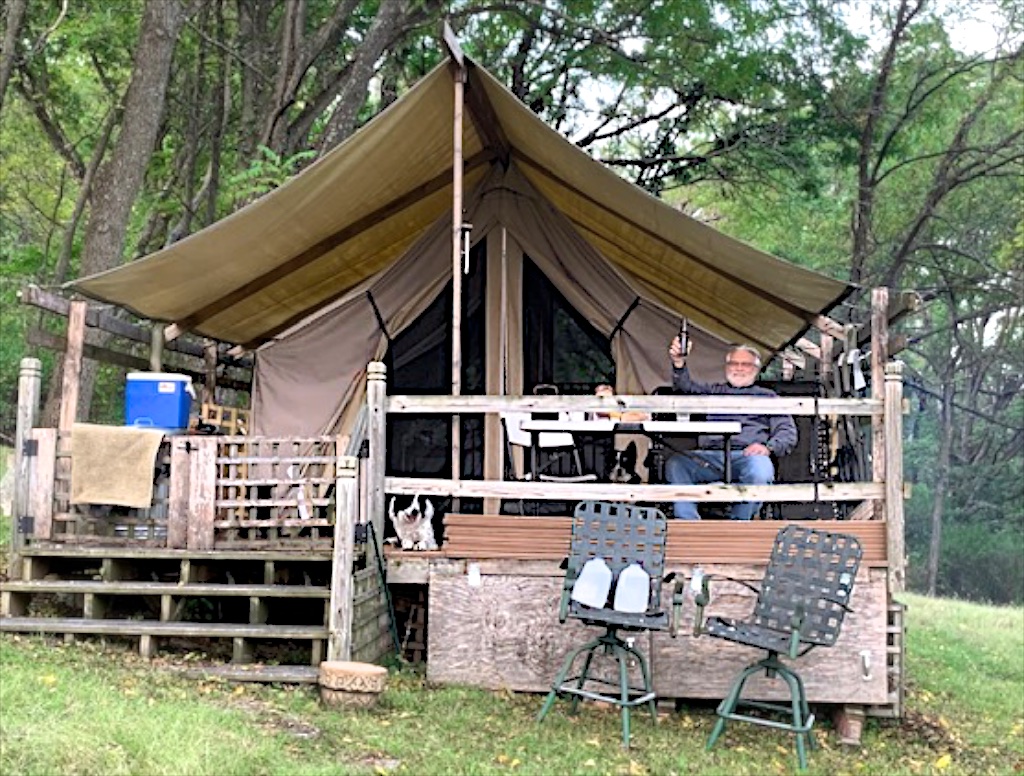 We’ve learned to keep all the bedding in a metal container when we’re not using the tent, since the mice think our bed should be shared with all woodland creatures. I’m quite fond of mice, but mice aren’t particularly good roommates, so they will just have to find other lodging. 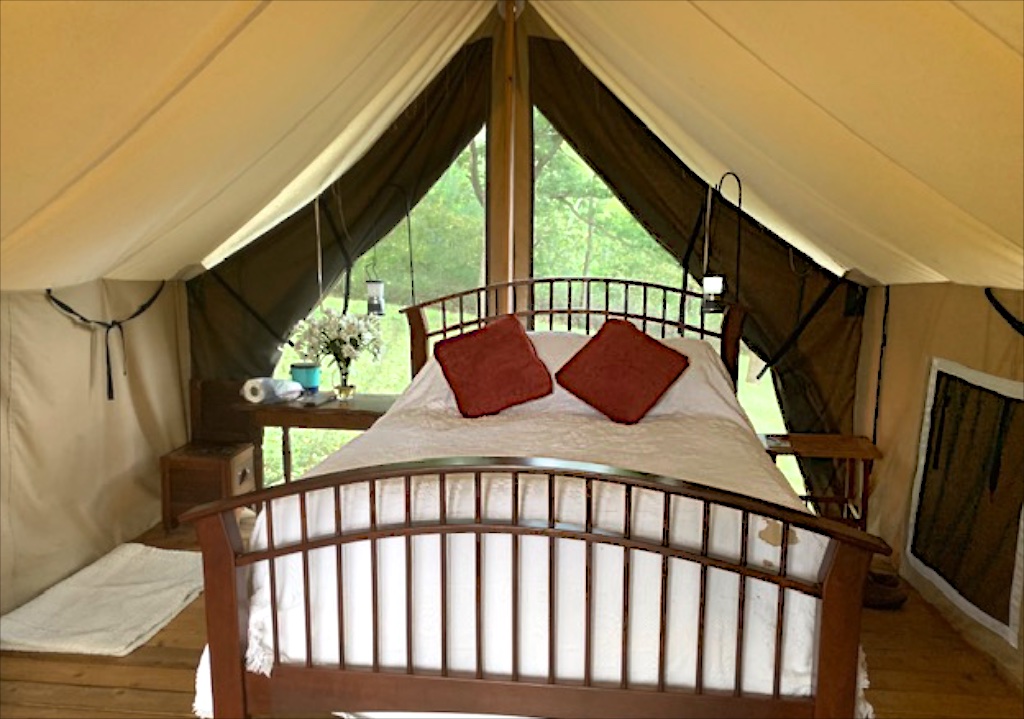 We made it up the hill to the tent

well before dark so that we could eat dinner outside. Jim grilled brats made from local, organic pork raised by a friend. My job was to drink a gin and tonic while he played with fire. 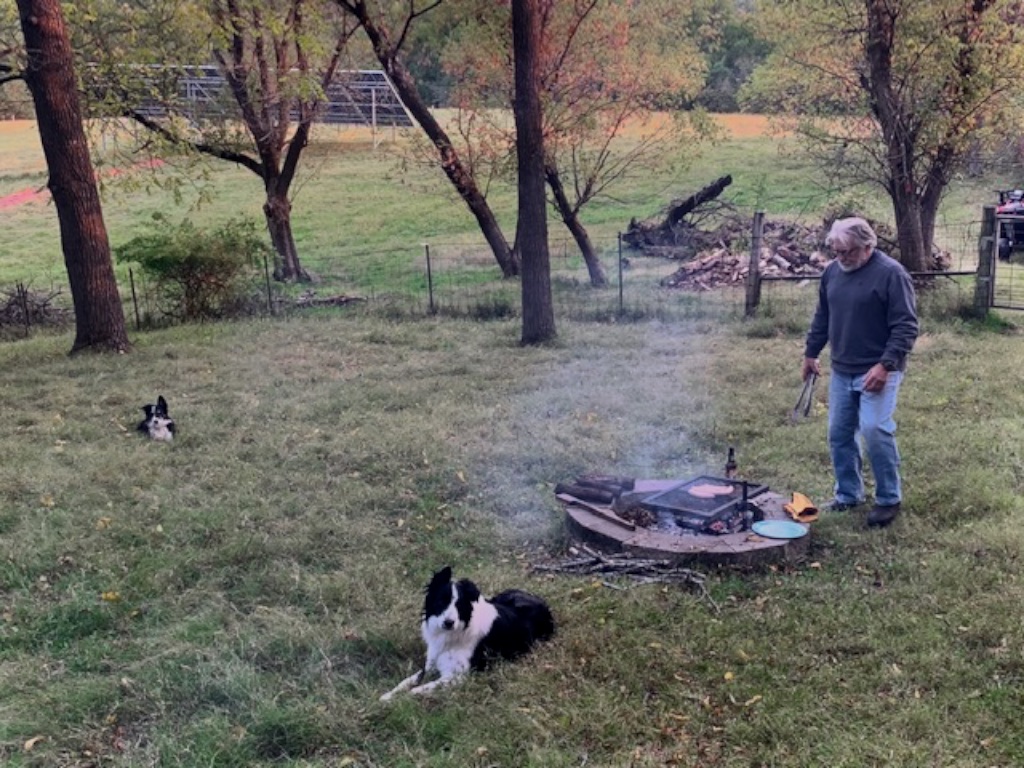 Apologies to Nellie and Polly, who were locked in the garage while we enjoyed being away from our endless To Do lists. We learned in spring that, if loose, Nellie insisted on coming into the tent, which meant Skip would be transfixed by her the entire night. I’m so proud of how he’s done with the cats–he’s graduated from rigid, hypnotized, breathless staring to either ignoring, or a brief moment of Border Collie Eye before being called away. But trapped in a small tent all night is just too much to ask, so the kitties were locked in the garage, with their food, water, four different sleeping platforms and a heated kitty house. Poor things.

We spent this weekend in Minnesota, at Pearce Ward’s Star of the North Sheepdog Trial. It’s run on a glorious field–a big bowl of undulating hills surrounded by woods just starting to color up, like a tasty appetizer for the sumptuous meal to come. 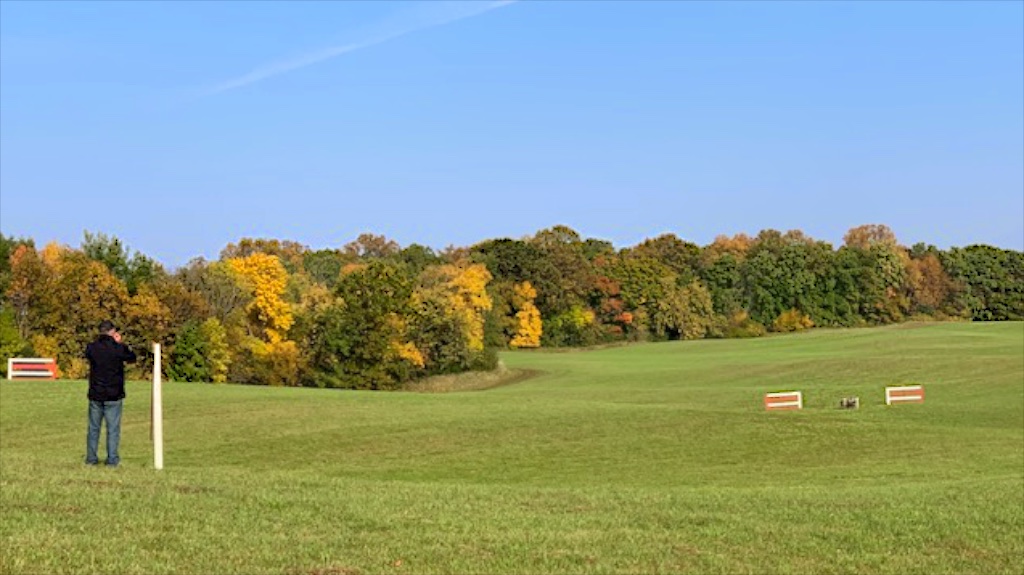 That’s top handler Gordon Watt, whose dog is bringing the sheep right through the fetch panels. The sheep are set 400 yards away, as far back as you can see on the right.

It was a wonderful weekend, although Maggie’s nemesis, The Sheep From Hell, got the better of her again. Honestly, the field is so huge and challenging (your dog is out of your sight at least 3 times) that I’m still blown away that my little dog went out and a did a perfect outrun and lift, and brought the sheep to me in a straight line, up and down the swales. She remembered the course from last year and never hesitated, and scored well in the first parts of the course.

But then, ah then, the drive. Worth 30 points, with none awarded until you finish all three legs, the drive is a challenge with trial-wise sheep who know exactly where the “exhaust pen” is, and can read a dog’s skill and commitment like a Rhodes Scholar reading Dr. Seuss. Insult to injury, Maggie ran both days in mid-afternoon, when sheep have no interest in moving from A to B, and are determined to lay in the shade and chew their cud. Or read up on How to Beat Dogs on the Trial Course and Enjoy Doing it. She also got sheep who were some of the tougher ones, but that’s not an excuse.; there were plenty of tough sheep all around. The second time we ran, the sheep actually took a detour and walked themselves into the pen when we were beginning the drive, knowing that 1) the “pen” is usually at the end of the run when they then get to rest, and 2) it would be very hard for Maggie to get them out (and at that point of the run, the handler can’t leave the post). It was so ridiculous that we all burst out laughing, the judge included.

But that’s trialing, and lots of dogs were able to push the sheep around the triangularly-shaped drive course. Some with little elegance, some so beautifully you almost held your breath watching. (I’m talking to you Peg.) The fact is that Maggie and I are simply not skilled enough to be able to handle these kind of sheep under those circumstances. As I’ve written before, I’ve known for years that Maggie has limitations, ones that no doubt could have been ameliorated more by a more experienced trainer. But she never gave up, and got the sheep halfway through the cross drive before we ran out of time in the second run, and I was proud of her for that. It was messy as messy can be, with the sheep continually dashing past Maggie to run to the exhaust, and Maggie bringing then back on line. She’s entered in one more trial, same sheep. Cross your paws for an early morning run.

On the other hand, Skip, Skip Skip, Mr. Skipper, Skipper-Dee-Doo-Dah, did beautifully in our first trial together. I had actually scratched him a week ago, because he wasn’t responding well at over 100 yards, but friends encouraged me to give it a try. The “intermediate” course (Pro Novice) in this trial has a nice set up to draw the sheep down to the handler, and the drive part of the course is relatively close in. The sheep are set “only” 250 yards away, a big difference from 400 in the Open class in which Maggie ran.

Here’s Skip watching the other dog’s runs, as calm and composed as any dog I’ve seen while doing so. We decided that he was judging the runs. 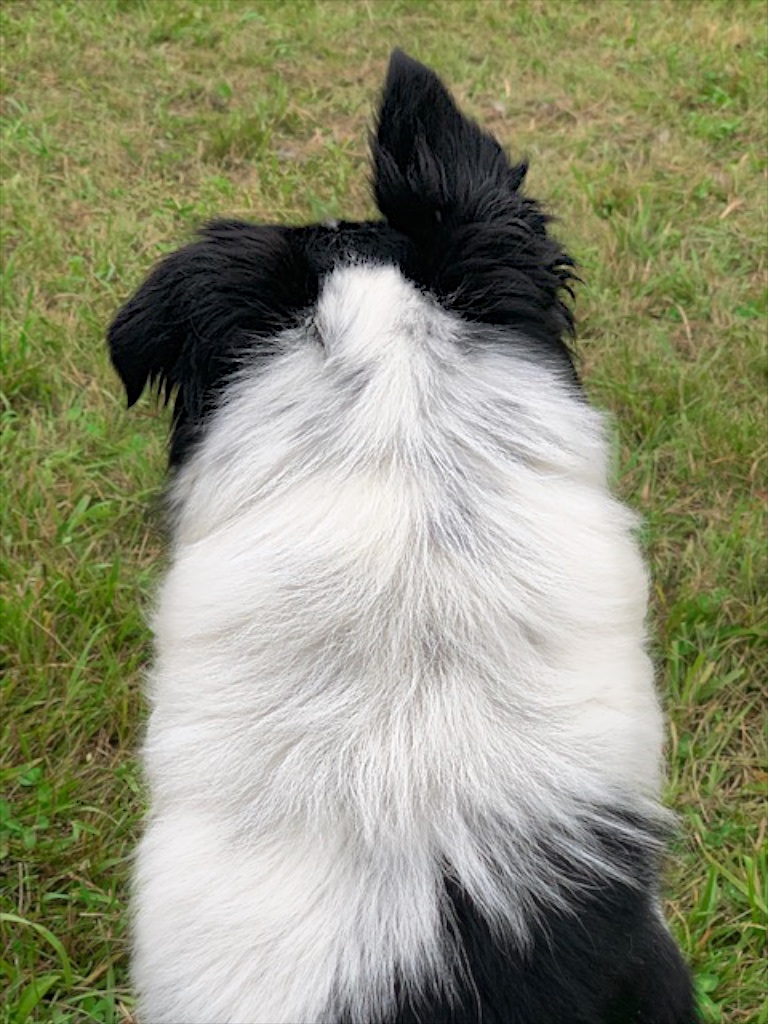 Our first run, the last of the day and just before dark, was credible. We got around the course, but as Jim said afterward, “It looked like you were on the edge of chaos.” Felt like it too. Skip kept over flanking, or running around to say, 9 o’clock, when he needed to stop at 6:30 or 7. But it was credible, as I said, and we got around the course.

The next day we ran mid morning on a cool day. I wasn’t sure how well I’d do, given an atypical two Cosmos the night before. I’ll just say I was quite happy that evening and leave it at that. But the next morning I was primed to get him stopped from over flanking, and encouraged that we had at least made a credible run the day before. And lo and behold, we laid down a beautiful run. Great outrun, perfect lift, nice fetch and a drive that looked to me to be pretty damn close to on line. We got a lower drive score than I expected, but the judge (the nicest man imaginable, Bob Allen) was brutal scoring the drive for everyone, and you can never fault a judge who is consistent.

All that was left was the pen. Which we had. Until we didn’t. Three of the four sheep went in, the fourth was 2/3 of the way in but then stood and faced Skip. Do I ask him to move a half step to his right? Walk him up? Move back myself? Or forward? Or do nothing at all but wait? I don’t remember what choice I made, but the ewe bolted out and raced around the pen. We made one more attempt and then ran out of time.

If we’d made the pen, we’d have placed second and missed first by one point. But everyone has an “If only” story at a trial, and mostly I am happy that Skip and I are starting to become a team. We ended up with 60 points (20/20 outrun, 10/10 lift, 16/20 fetch, 14/30 drive, 0/10 pen), tying for sixth place. We have a long way to go, and I fully expect some not so pretty moments, but for a first time together, it went well. Best of all, Skip had no trouble handling the sheep, although it should be noted he always ran when sheep are easy to move–late evening or morning.

The only negative about his run is that he was so over heated afterwards. Not to the point of any danger, but still, hotter than any dog I’ve ever had would be. And this on a cool day. Excessive panting and tiring easily are signs of  progressive mitral valve disease, and we know that Skip has a leaky mitral valve. The cardiologists differ on whether his heart condition at present explains his apparent over heating, but we’ve known since we got him that his future is uncertain. All the more reason to love and appreciate him now. I’ll be seeing another DVM, Dr. Jodi Bearman, to see if she can help with a variety of holistic treatments. I’ll just keep working on it, grateful at every moment that we have such a talented and benevolent dog in our lives. (FYI, it’s not Border Collie Collapse. Virtually no symptoms of that, which seems to be a neurological issue that causes staggering, bizarre limb movements.)

All that matters now is that Jim and I are beyond lucky to share our lives with Maggie and Skip, and I’ll move heaven and earth to take care of them as best I can.

Here’s my dear little Maggie girl, as pretty as the leaves around her. 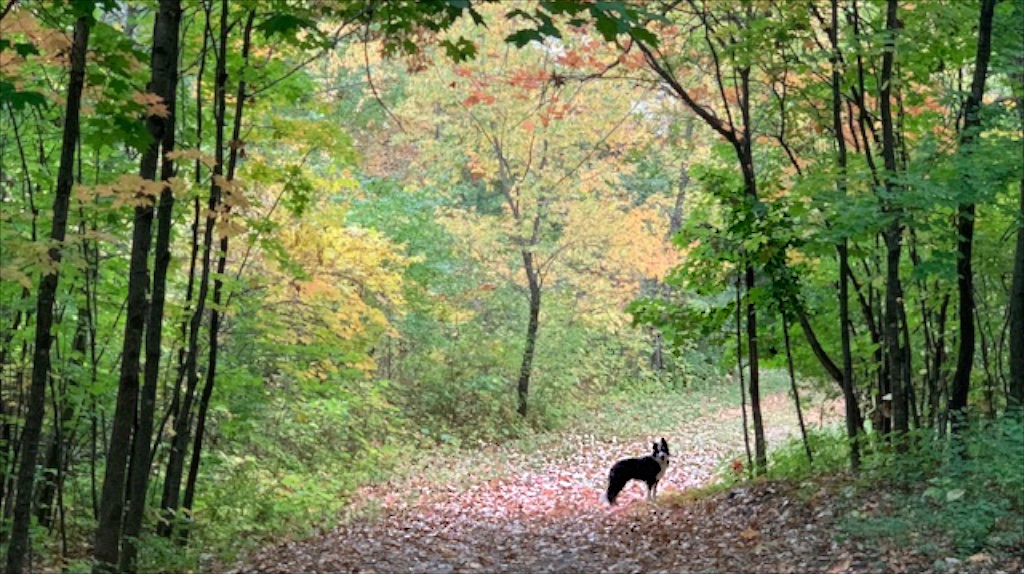 Life is challenging now for all of us, and we know that savoring life’s joys, no matter how small, is what keeps us going. Here’s to the feel of your fingertips on the velvet behind your dog’s ears, the warmth of their body as they lie beside you, and the depth in their eyes as they look through your own, into your heart.