Welcome to an ongoing inquiry about the behavior of people and dogs.
Blog Home >> Animals and the People Who Love Them >> Fund Raising 2015: Love Song to Lassie
French Vanilla. Ice Cream. Summer Day.
Those were the six words I wrote for my Lassie girl, the day she died. That was a little over five years ago, and I still miss her more than I can say. She was pure and simply the sweetest dog I have ever had. 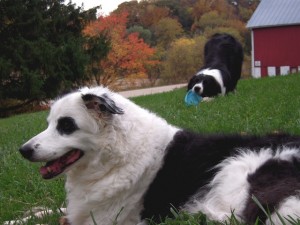 She was Cool Hand Luke’s daughter, and a dog I never expected to have. I had turned down a puppy in return for Luke’s stud service, having more than enough dogs at the time.  Lassie’s breeder brought the litter to Black Earth so that Luke’s many admirers could pick out the puppies they had reserved. “I know you don’t want one, but if you did, which one would you take?” I was asked. “This one,” I said after spending the day with all the puppies, enamored of a small female with a raccoon black patch around her left eye.

A year later, that same dog arrived at the farm at 11 o’clock at night. The home she was in hadn’t worked out; the breeder asked if I would take care of her a few days until a good home was found. I said yes. My husband, Patrick, had just informed me that he was leaving me after 17 years together, and in a moment of stunned grief and desperation, I latched onto Lassie as if she was a lift boat.

She came late in the evening, and all that night I kept my hand resting on her soft, creamy fur. As the dim light of dawn began to creep into the room she and I got up together. I let her out of the house to run up the hill behind the other dogs, knowing she’d follow them into the fenced yard. I don’t know why I called her name as she galloped away–what is the chance she’d listen when I had just gotten her? But as I called she spun around in mid-air and ran back to me, sliding to a stop like a quarter horse at my feet. That afternoon I introduced her to sheep. She did a perfect outrun around to the back of the flock, slowly walked them up to me and lay down, as if she’d had months of training. I called the breeder as soon as I got back to the house. “We’ve found Lassie a home, if you’ll let me keep her.” By the end of the first day we were together, she fell in love with her father Luke, and I fell in love with her.

She died of liver cancer fifteen years later. Ex-husband Patrick and I are now both happily married to other people, and are good friends. He lives just a few miles away, with Lassie’s daughter, the sweet and beautiful Tess. Like her mother, she passed away at the age of sixteen. But it was still too soon. It is almost always too soon, isn’t it?

That is why I am writing this now, because we have a chance to support research that will help many of our dogs live a little longer. I would be grateful, more grateful than I can say, if  you wwould join me in raising  money for one of my favorite causes, the Puppy Up Foundation. It funds research on cancers that affect both people and dogs in hopes that combining expertise and both human and animal medicine will lead to faster cures. Last year the Madison contingent alone (it was then called the 2 Million Dogs campaign), raised a whopping total of $86,000, a national record. Wow. Already some of those funds are supporting research at Princeton University on mammary tumors in people and dogs.

This year the goal for the Madison walk is $100,000 and how sweet that would be if we made it! Jim and I walked as part of the Pet Pals team and I’m blushingly proud to say that because of your support, I was the individual top fund raiser in the city. I’ll go for the same goal for all of us for this year, and am hoping that together, we can again raise over $3,000. If you’re in the Madison area, come join us on the walk on May 3rd.  It is a hoot and a half. But here’s where you add your own donation if you can. Either way, we’d all love to read any memorial you’d like to add about your own special dog. Oh how I wish that they lived longer…

MEANWHILE, back on the farm: Sunny, and most importantly, temperatures well above freezing! Actually in the 40’s. Whooo Hooo! Yesterday I felt hot outside with just my spring jacket on. For those of you who don’t live in the frozen north, know that the concept of “hot” has been an unfamiliar one around these parts. And there’s more: Mud! Never have brown and muddy paws looked so good.

Now we hear there’s even warmer weather coming this week. Temps in the high 50’s? I can’t even imagine. Bring out the swimsuits. (Well, maybe not. Let’s just say that brutally cold weather does not facilitate successful weight loss.) It’s still icy and snowy in spots, and we’ll get lots of cold and snow to come in the next six weeks, but we are loving it now. Hard to imagine that there will be bulbs coming up in a month. And lambs! Lady Godiva, Lady Baa Baa, Pepper and Cupcake (also known as “Honey Boo Boo Ewe” — another unsuccessful weight loss program) are scheduled to lamb in mid-April. I have to go to Washington DC for a speech in mid-April, hope Jim doesn’t end up being the one doing all the lambing work. Cross your hooves for us…

Sunday morning 4 BCs and 3 people took a glorious early spring walk on a trail a few miles from the farm. Here are friend Donna, Jim and some of the BC’s tromping up a steep hill and enjoying the warm weather. 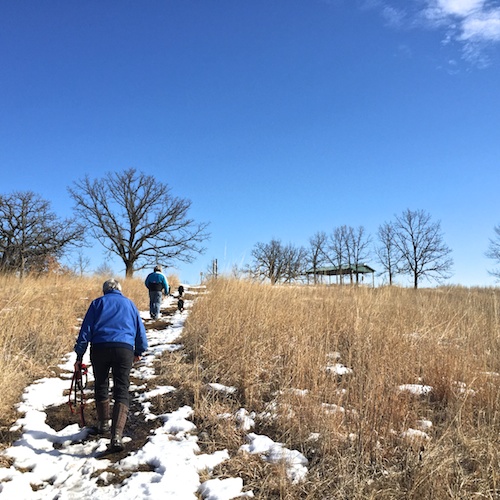 And here’s Maggie girl practicing her driving Sunday afternoon under the blue sky and cotton clouds. Luke’s headstone is on the left; it says “That’ll Do, Luke, That’ll Do.” Lassie is buried to his right, beside him. I always envision that their spirits are still there, watching over us all from their favorite place on the farm. Rest in peace my friends, I still love you both more than I can say. 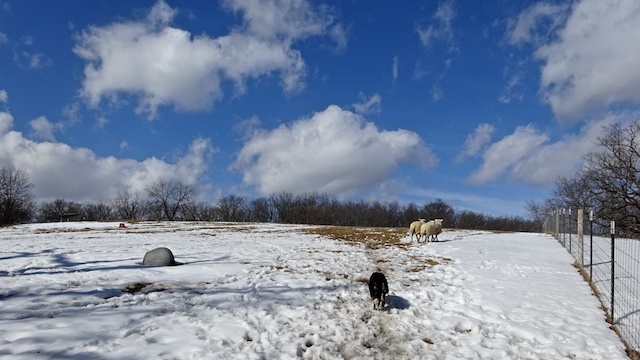 « When Is It Time to Put Down a Dog Who is Aggressive to People?
Fish Falling From the Sky »