Welcome to an ongoing inquiry about the behavior of people and dogs.
Blog Home >> Animals and the People Who Love Them >> Is Your Dog Safe Off Leash?

When IS it safe to let a dog off leash? I’ve been in several conversations lately with people who live in rural areas, and those who live in urban or suburban environments. What became clear was that, in their case at least, the dog owners in the country couldn’t imagine having their dogs restricted on leashes or fences, and folks in the city can’t imagine letting their dogs off leash outside of a fenced area. Our 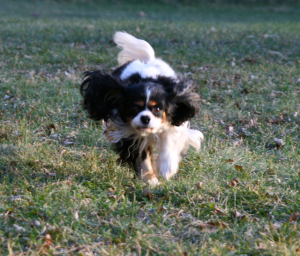 discussion reminded me that I’d written a post several years ago about letting dogs off leash, and because it’s such an important topic–balancing a dog’s safety with his or her enjoyment–I thought it was worth reprinting. I’d be interested to hear what you think: What is your criteria for letting a dog off leash??

From January 2013, (written after letting Tootsie off leash off the farm for the first time in her life; I’ve made a few minor modifications).

What do you need to know to evaluate the risk and decide whether to take it? I thought it might be an interesting exercise to list some of my criteria and decision points in regards to Tootsie, and to hear about your thoughts and experiences.

I should probably mention here that it is my belief that one of the things dogs want more than anything in the world is a certain amount of autonomy. Some dogs have a ton of it, others almost none, but surely every dog wants to be able to do what she wants to do, when she wants to do it, at least some of the time. Being off leash fulfills that to a great extent, but it also puts dogs at the potential of risk. So how does one decide when to unsnap the lead? Here are at least some of the things that need to be considered:

CONTROL: It is something of an irony that the more control we have over our dogs, the more freedom we can give them. Never is that more true when asking if a dog can be safe off leash, and it was the question I asked myself late Friday night when I decided it was 99.999% a sure thing that, once off leash and out of the car, Tootsie would sniff around, relieve herself and then immediately come when I called. But how does one know if a dog will come when called in any context?  Ah, you don’t, not 100%, but here’s what I think you need to get to 99.9999%:

STOP ON A DIME: People often assume that all one needs to manage an off leash dog is a good recall, but I’m a big proponent of first teaching a dog to stop on cue. Asking a dog to stop on a dime might be critical for the dog’s safety, and if you think about it, that’s a very different exercise than asking a dog to come back to you. I can’t count the number of times I asked Willie to stop and stand still (I use “Stand,” a cue common in sheep herding that asks a dog to do exactly that: don’t lie down, but stop moving). Perhaps he was starting to sniff beside a partially frozen stream, or I wanted him to wait for me to catch up before he went around a corner on a trail.

Besides being a handy cue, I’ve learned it is much more effective to ask a dog to stop first before calling him to come back to you, especially if he is moving fast in another direction. Think about it: If a dog is running away from you, in order to come back to you she has to 1) stop, 2) turn around and 3) move toward you. That’s three things, right? I’ve found it far more effective, especially with dogs who love to run, to teach them first to stop on cue before asking them to do a recall. It’s not all that hard to do: Just let your dog get a step or two ahead of you and say “Whoa!” or “Stand” and then reinforce with something ridiculously wonderful. Gradually use the cue when the dog is either 1) farther away from you and 2) moving faster. Try to keep those 2 components separate as much as you can, and gradually build up to asking the dog to stop while tearing off in another direction. Manage this carefully by setting your dog up to win: Don’t yell “Whoa” when  your beagle is disappearing into the woods after a rabbit if you haven’t gotten full compliance at a much easier level. However, a good stop is not enough…. you also need:

A RIDICULOUSLY GOOD RECALL: Coming when called when there’s no environmental competition simply doesn’t count as a “good enough recall”. One of the reasons I decided to let Tootsie off leash in the woods last weekend is because we have spent several months working on her coming when called while running away from me at a dead run toward something she really, really wanted. I’ve worked on her recall ever since I got her a year and a half ago (if you missed those blogs, she had been a puppy mill brood bitch for 7 years). It took me months to let her off leash at the farm, and then only in specific contexts in which I felt her behavior was completely predictable. But it’s one thing to have a dog come when called in a predictable and consistent context. It’s an entirely different matter to be able to get a dog to come to you when it is already dashing away toward something it wants.

I was lucky here, because the farm provided the perfect set up. First, I have several fenced areas where I could safely let Tootsie off leash and work on her recall. The area around the house and barn is not fenced however, and has a road that runs by about 75 yards from the house, so I was much more cautious about letting her off leash there. In that context I first worked on teaching Tootsie to heel beside me as we walked from the house to the barn. She adores food, and so it didn’t take long to get a reliable response. Then I began asking her to stop or recall when I released her from the heel. I knew she would run straight to the barn, so I had no worries about her safety. I had her favorite food (chicken) in my pocket and asked her to stop when she had just barely left my side. Gradually I began to give the cue when she was farther and farther away from me. Once I could get to her turn on a dime and run back to me even when twenty yards away, I began to test it in other contexts. And sure enough, she flipped her little body in mid-air and came running.

CONTEXT: Location, Location, Location. Realtors aren’t the only ones who emphasize the importance of location. There are many places I would never let Tootsie off leash. Here’s an example: we went recently to visit a friend who lives in a suburb, with a small lawn between the house and the road. I never would have considered letting her off leash in that context. Why? Because first, we were just too close to a road for comfort, she could have gotten into the road before I could blurt out a cue. Second, what would be the point? The cost/benefit balance was skewed far to the negative: the risk in no way was worth the pay off. However, when I finally did let her off leash away from the farm, we were at least 600 yards from the closest road, I’d tested her emergency stop first, and the payoff was huge. She got to be a dog trotting down a trail woods for the first time in her little life, and although I’m sure some people would argue one should never take any risk at all, I’m not one of them. The only 100% guarantee of safety for Tootsie was to live in a cage, and she’d already done that for seven years. Enough is enough.

WHO’S YOUR DOG? If asked to name three things we all needed to consider before letting our dogs off leash, I’d say knowing each dog as a personality is the third. Tootsie spent 7 years in a cage, and didn’t know that the noises people made were meaningful for most of her life. She’s come incredibly far, but she’s still a Cavalier King Charles Spaniel that I got at age 7 who had never been trained to do anything for most of her life. Willie, on the other hand, came with recall software pre-installed. I could just about take him anywhere and let him off leash, and know he’d come back to me when I asked. He’s a Border Collie, Tootsie’s a Cavalier. Genes matter. I  should add here that there are still contexts in which I would never take the chance with Willie, because the pay off wasn’t big enough. His safety is still my primary concern.

NEVER DONE: One last point: Don’t ever stop “training your dog to come.” I still often reinforce Willie for coming when called, sometimes with voice, sometimes with the toss of a toy or letting him chase me as I run away from him.  And I’ll never stop watching Tootsie like a hawk if she is off leash, and reminding her how very, very fun it is to come when called.

MEANWHILE, back on the farm: Ah, fall is in its glory. Still lots of color left, although it is clear it’s not going to last long. Here’s a bush in the front yard that makes me smile every time I walk to the barn: 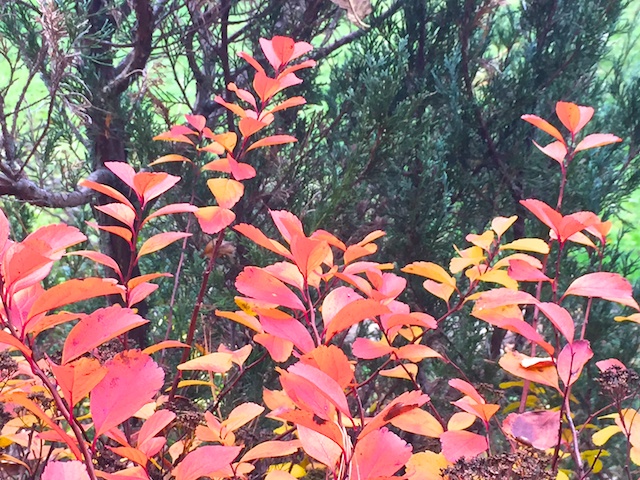 And here’s my Polly girl, a farm cat whose never been on a leash. She loves (as do all cats) getting up high, and probably thinks that fence posts are put there for her to perch upon. 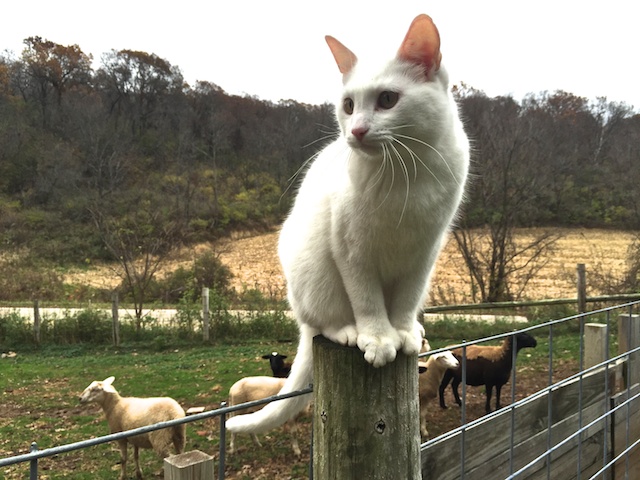 I couldn’t decide which photo to include–the one above or the one below and so, decided to use them both. I rather like the unique perspective. 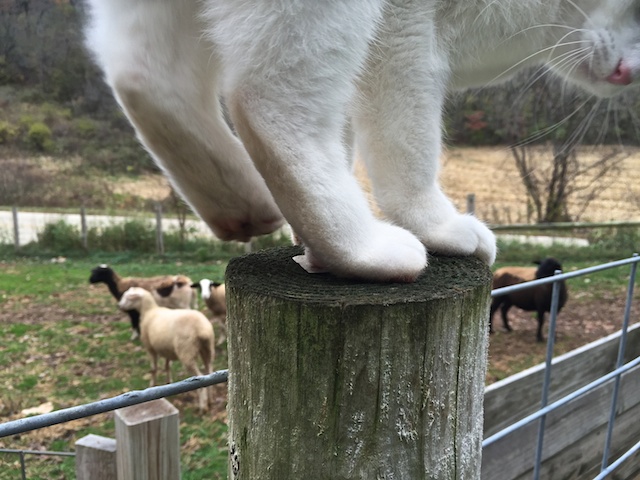 « Halloween Costumes for Dogs?
What does “Licking” Mean? »