Welcome to an ongoing inquiry about the behavior of people and dogs.
Blog Home >> Animals and the People Who Love Them >> Lassie

I haven’t written much about Lassie lately, because I didn’t want the blog to turn into a soap opera, but things have changed so much that it feels only right give you an update.

She hasn’t been doing well. After her ALT values were slightly elevated about a month ago, we did an ultrasound and her liver looked clear. We did a bile acid assay, which was slightly elevated, but not enough to make a biopsy seem worth the intrusion for a 16 year old dog. She’s gone up and down since then (some vomiting, urinating in the house, but only erratically), and was scheduled for more tests today. But on Thursday she went into free fall. Vomiting, no appetite, looked truly miserable. Tests showed her ALT (a sign of cell death in the liver) to be off the charts. Subsequent tests with an internal medicine specialist showed her to be in a late stage of liver failure.

I don’t need to tell you what’s happening now. Most of you have been there: hours on the internet (could it be dental disease? hypothyroidism beside the other obvious things?), a gazillion meds (antibiotics, prednisone, anti-inflammatories, chinese herbs, SamE, Milk thistle, pepcid), twice daily SubQ fluids at home .

It’s been 48 hours and there’s no external sign of improvement. She’ll only eat food she’s hasn’t eaten since she’s felt nauseous, and we are starting to run out of novel foods, and she won’t eat much of that either. She is clearly miserable, barely moves and lies in places in the house where she’s never spent time before. (FYI, this is an amazingly reliable indicator of a very sick dog… all my dogs have followed this pattern since Misty first alerted me to something being wrong when she lay in the middle of the dining room floor for the first time in 12 years. Turns out she had hemangiosarcoma, and died 4 days later.)

We’re going day by day. My vets tell me it can take a long time for livers to recover from whatever assaulted them. (Hepatitis? Toxins? Lepto?). Of course, she could have liver cancer… we couldn’t know that for sure without a biopsy. We’ll continue what we’re doing through the weekend and re assess on Monday. Her acupuncturist is out of the country, so I am looking for another to fill in. We have a lot of decisions to make about how much we are going to put Lassie through, balancing quality of life with information that might, or might not, allow us to save her. Of all the dogs I’ve owned, Lassie is the most fearful of pain and discomfort, and I am clear in my commitment to not take drastic steps to try to save her. Remember the infamous quote from Viet Nam: “We had to destroy the village in order to save it”? Not going to happen to my Lassie.

All that was written by my frontal cortex, the analytical part of my brain that is on high power every second now trying to make the best choices that I can. Could I save her if I just learned one more fact? Is there a treatment I’m missing because I logged off of the internet too soon, or because my wonderful vets were tired the day we talked? You know the drill.

But, then, there’s the other part of me. I intellectually know that Lassie is 16, and that every day with her in the last couple of years has been a gift. But, oh, I’m not ready. (Picture me SCREAMING that at the top of my lungs, followed by lots of obscenities.) I simply can’t imagine life without my Lassie girl. Her father, Luke, was my soul mate dog, a “one-in-a-million” dog about whom I wrote “I imagine his death to be as if someone took all the oxygen out of the air and expected me to live without it.” He saved my life in more ways than one, and I think that both he and I thought of him as my protector, my home boy who adored me as much as I adored him. Pippy was my faithful Aunt Martha, the sweet, loving relative you could always count on to take care of others and not worry about herself. Tulip was my clown, my muse and my trickster. God I loved her so much.

And Lassie? Oh Lassie. She is the one who needed me, the white-sugar-sweet-soft-wonder dog who barely needed training and melted into my life like a vanilla ice cream cone on a hot day. I’ve written 13 books, and I don’t have the words to tell you how much I love her.

Her she is, about an hour before I wrote this: 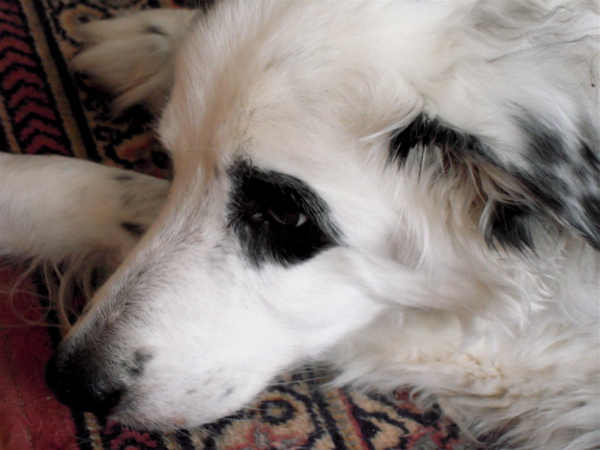 « The Right Dog
Why Dogs are More Afraid of Men »