Welcome to an ongoing inquiry about the behavior of people and dogs.
Blog Home >> Animals and the People Who Love Them >> Save the Date(s)!

Get out your calendars! There are three special dates I want to highlight today, including one coming right up that is free, fun and educational. The Modern Dog: In & Out of the Shelter will be presented on Saturday, July 27th, at the University of Illinois Chicago. It’s the very special “Public Day” of the Animal Behavior Society’s 2019 conference, which is free and open to everyone. No onerous conference fees. No registration necessary. It is from 9 to 1, and offers CEUs for CPDT, IAABC & KPA. 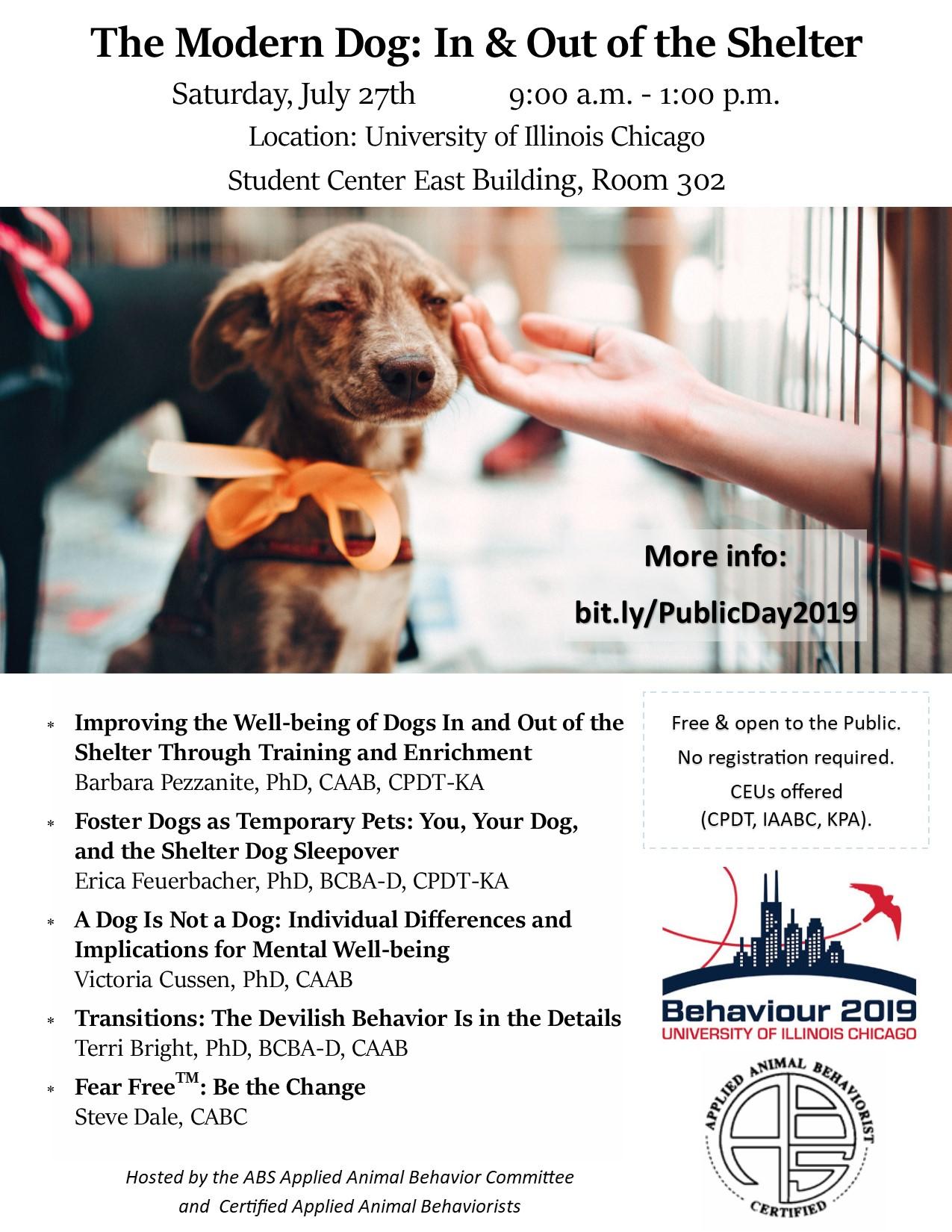 The program looks chock full of talks that would interest any dog lover. I can’t be there, but I was there last year and it was awesome. It’s only 9 to 1, it’s free and it’ll be amazing. No need to register either, just show up and soak up some knowledge and inspiration. (Apologies for being late on this. I have no excuse except for life, which often occurs not as planned.) 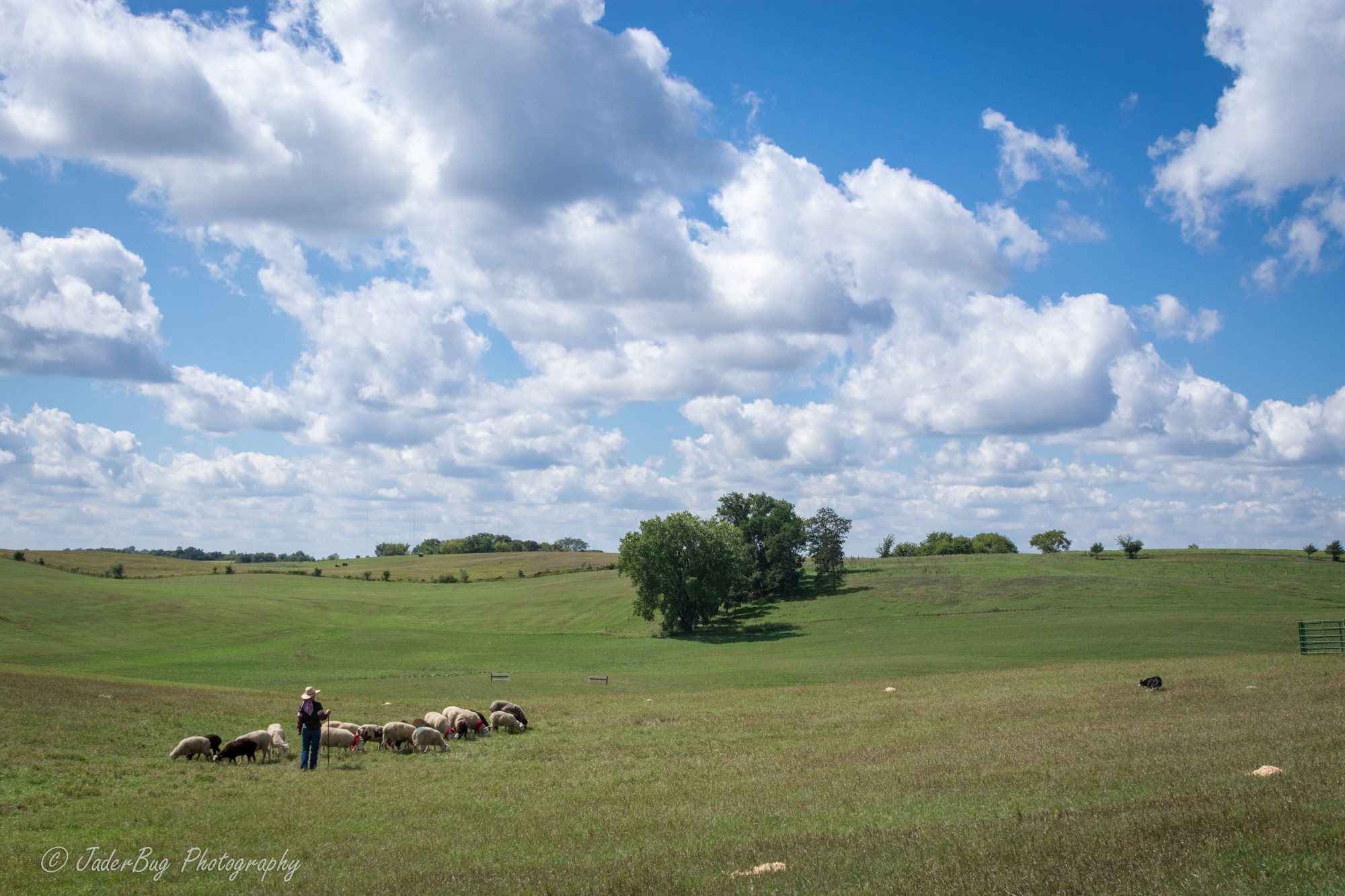 On an altogether different note, if you’re in Wisconsin or Minnesota, save the date for the Midwest Championship Sheepdog Competition over the Labor Day weekend outside of Hudson, WI. Held on one of the most beautiful courses in all of the U.S., this sheepdog “trial” (no lawyers present, unless they are running a dog) runs from Friday August 30th to Monday, September 2nd. Friday and Saturday include the “Open” runs, the highest level of competition, in which dogs have to go out a good 500 yards to gather the sheep, move them through a series of gates, bring them back to the handler who will then work as a team to split the group into two parts, and then pen the flock into a tiny little pen. Whew. All under time pressure.

Imagine standing at the post (where you and the dog start) and looking at a group of sheep 500 yards away, and not feeling your stomach fall to your feet. That’ll be me, because Maggie and I have just moved up to the Open class, and this will be only our second try on an Open level course. It just happens to be one of the biggest, baddest courses in the Midwest, and so if Maggie even finds the sheep and brings them to me in a credible fashion, I’ll be very, very happy. If we manage a reasonable drive (also much much farther than we’re used to doing), I’ll be absolutely thrilled.  If we get any farther than that, I’ll be over the moon. Warning: If Maggie gets in trouble and it looks like she’s over her head, I’ll leave the post and take a RT (for “retired”) and bring her back. At this point in her experience, every run in this class is as much about learning as competing.

The culmination of the trial is on Labor Day itself, when the famous Double Lift Competition begins a 9 AM. The top Open dogs from the previous days have to run out 600-700 yards (yeah, you can barely see the dog, I’m bringing binoculars to watch), bring the 10 sheep toward the handler, and then “look back” to find a second group of 10 sheep, also far, far away, on the other side of the course. It’s challenging for any dog, but especially hard because the dogs have learned where to look for the sheep in day’s past–but that’s not where they are anymore. Then, after driving all 20 through the usual set of gates, the ultimate drama begins. Now the dog and handler have to separate the 5 sheep with “collars” away from the other 15. This is no easy task, because the collars are put on randomly, and one might be on a ewe whose grown up lamb doesn’t have a collar. Or there are 16 sheep who like to stay together, and 4 others who have formed their own club. 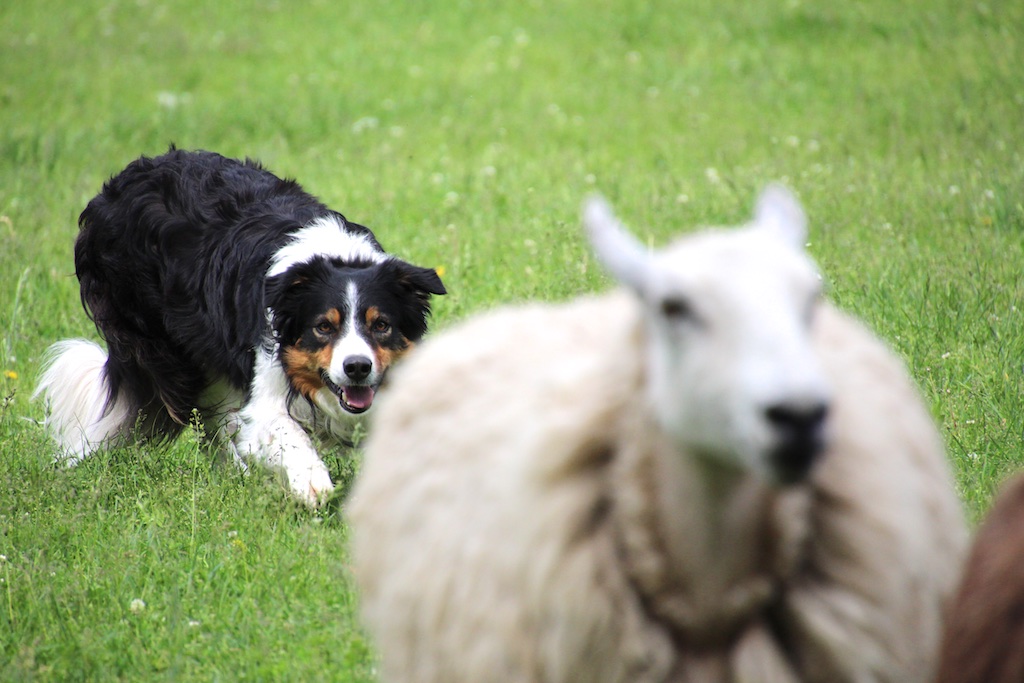 The spectators get almost as invested as the handlers, and you can hear gasps of frustration from the crowd when a recalcitrant ewe dashes back to the wrong group at the last minute. (There’s a ewe attempting exactly that in the photo below!) Watching these dogs use their heart and soul to accomplish the task is inspiring–remember they have already worked incredibly hard and are tired. (And often hot, which is why there is a tank of water set out for the dogs. Dogs are allowed to take a break, jump in to cool off, and then come back to finish the job. It takes up valuable time, but what could be important than keeping your dog safe and healthy?) 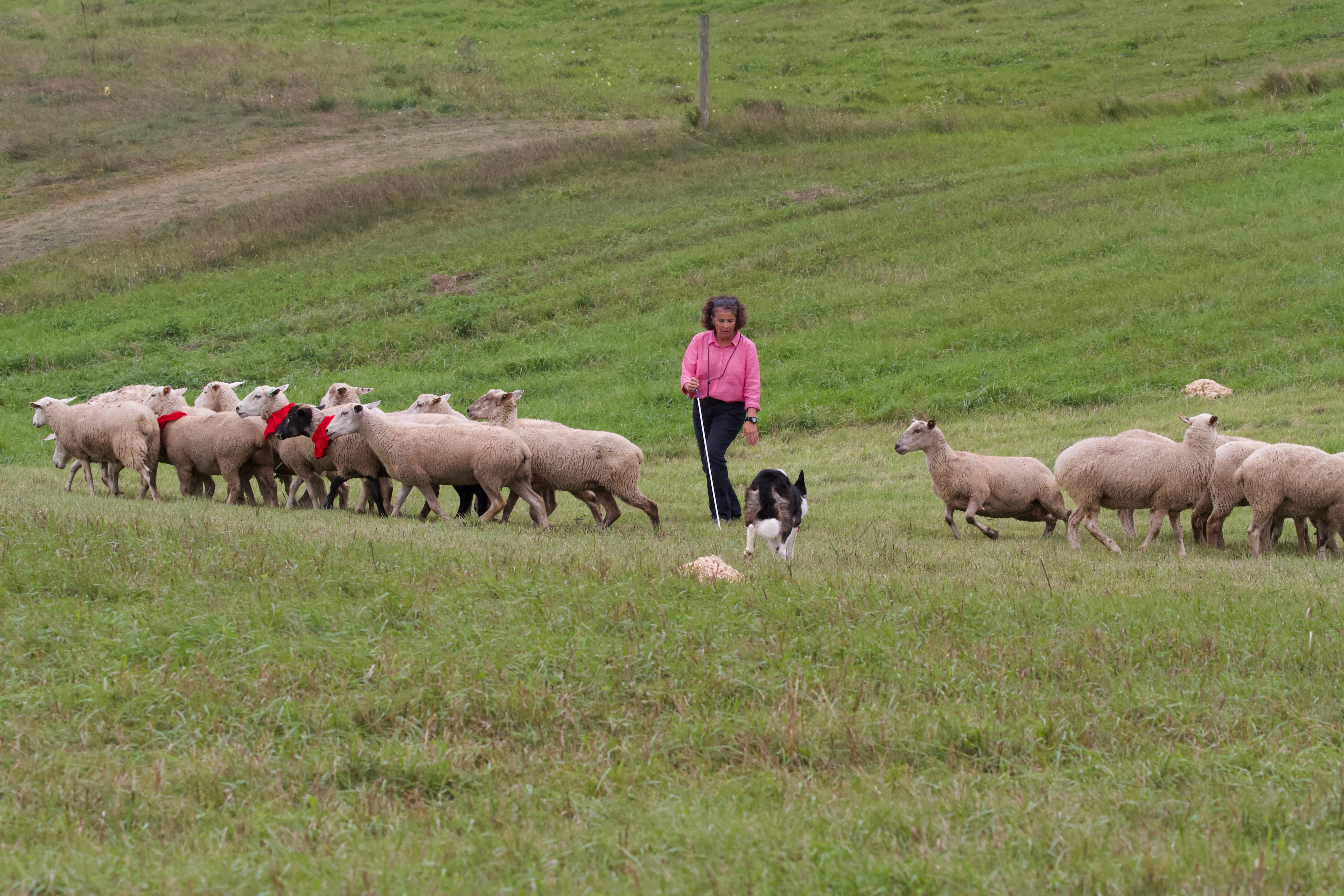 The third event I want to mention is the Canine Science Conference on October 18-20, 2019 in Phoenix, AZ. Keynote Speakers include Gregory Berns of Emory University (and canine MRI fame), Elaine Ostrander of the National Human Genome Research Institute, and Clive Wynne of Arizona State University.

Last year’s conference got rave reviews, so if you can manage it I’d say it is well worth your time. I won’t be able to go myself, but look forward to learning more about the talks. Just being able to pick Dr. Ostrander’s brain about canine genetics would be worth a plane ticket from here to Arizona. I’d love to hear from you if you went last year–what was your favorite part? Was it well worth the registration fee?

How about you? What’s on your calendar? Any events you think we’d all be interested in?

MEANWHILE, back on the farm: It’s hot and humid (hateful weather in my opinion), but pretty standard weather for mid July. But the garden flowers are peaking right now, and making me happy. 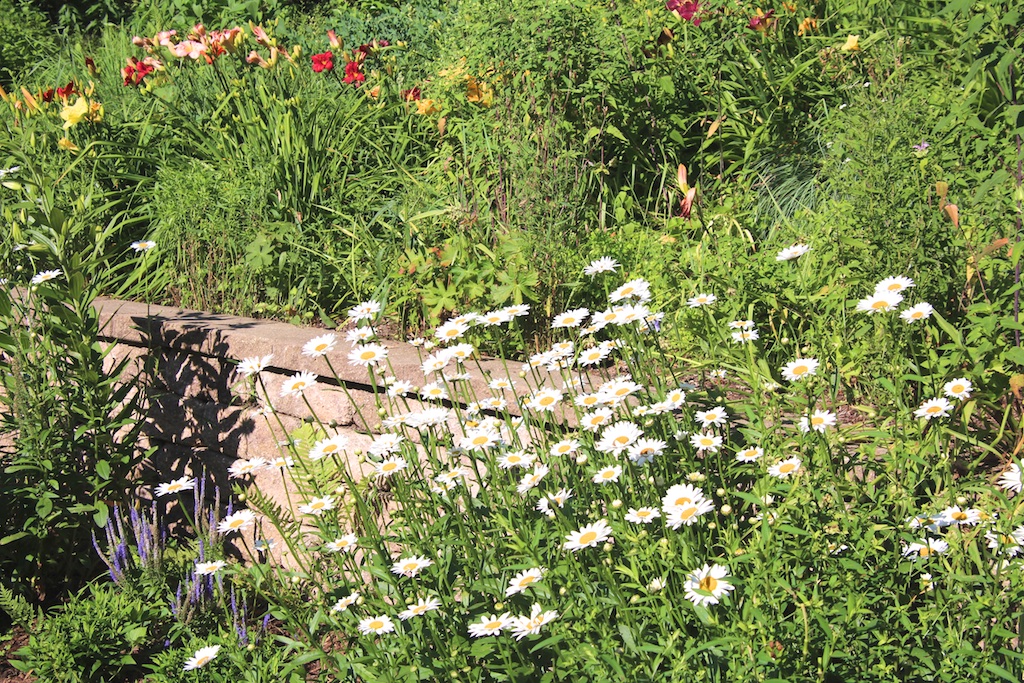 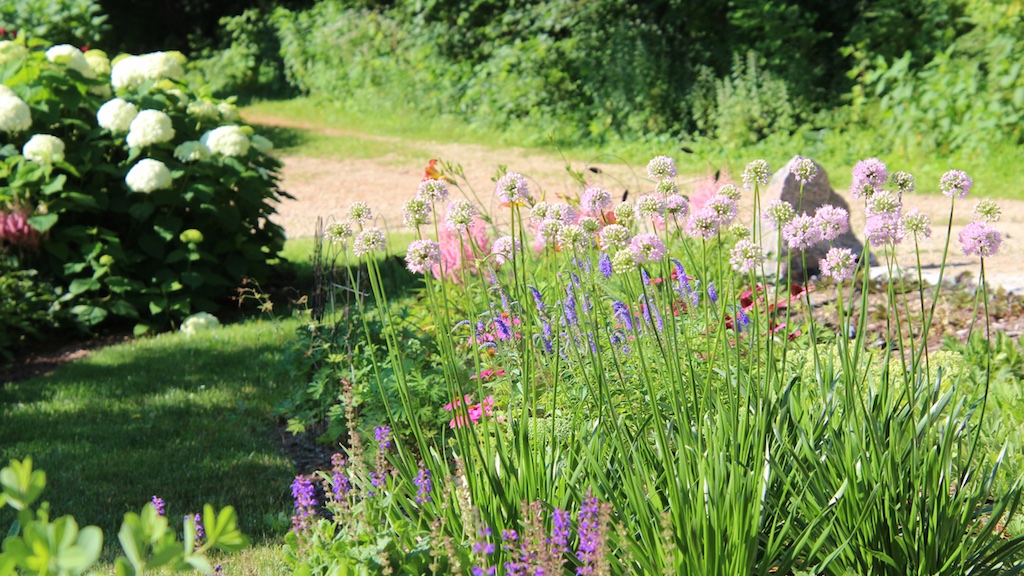 But this is what all the smart mammals are doing right now: 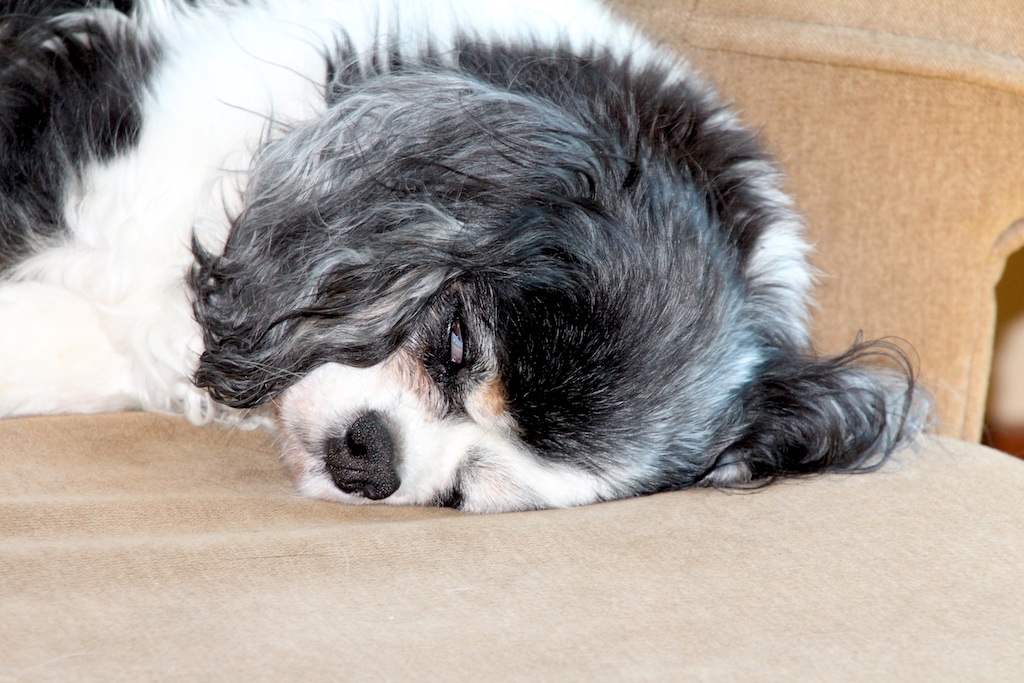 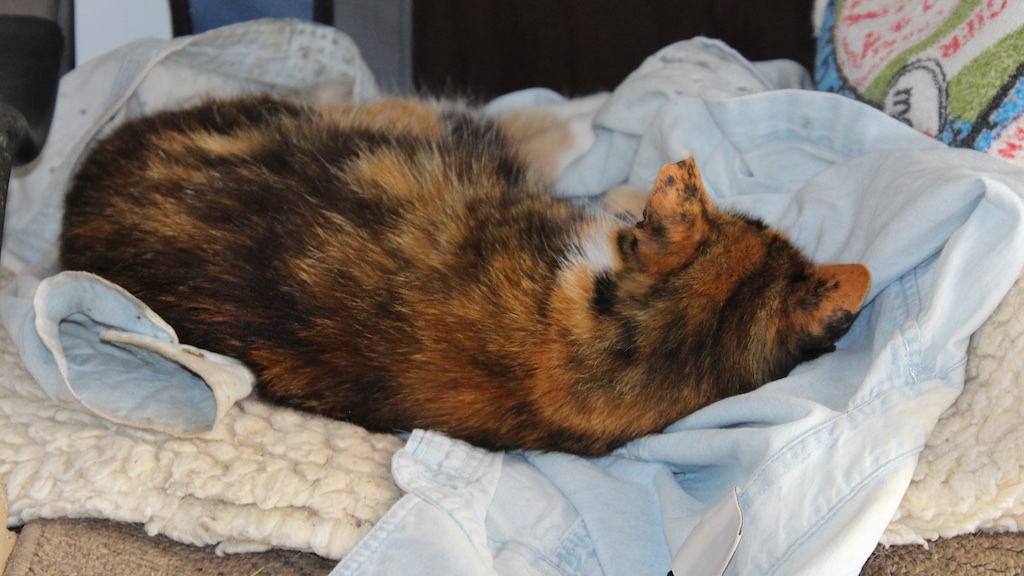 Hope your weather is amenable to doing whatever you want to do, including napping.

« It’s All About the Outline: Dogs, Statues, and Dangerous Hats
Don’t Let the Chain Fool You »