Welcome to an ongoing inquiry about the behavior of people and dogs.
Blog Home >> Animals and the People Who Love Them >> Subliminal

In preparation for a talk I’ll be giving soon in Madison, WI about the mental lives of animals, I’ve been reading Subliminal, by Leonard Mlodinow. I highly recommend it; Mlodinow elaborates on our increasing, and sometimes unsettling knowledge about the power of our unconscious. Here’s a talk given by the author himself about the topic. (He also gets my vote for the best cover ever of a book: If you check it out on Amazon you can’t tell that, in person, you can only see part of the cover until the light hits it just right. I burst out laughing after I’d purchased the book while thinking: “This cover is beyond strange” and then discovered the full cover while walking out of the bookstore.)

This is relevant to my upcoming talk (and my fascination with the cognitive life of non-human animals) because there has been so much discussion lately about whether animals are or are not conscious. At first blush the suggestion that animals are not conscious entities is reminiscent of Descartes’ argument centuries ago that, without language, animals are more akin to mechanical objects than to humans. Argh. However, the current conversation is motivated by a far more nuanced view, which is based on the knowledge that most of what we humans do is generated by our unconscious, not the part of our inner life that we are aware of. I’m raising it here to speculate about how much of our behavior around our dogs is based on our unconscious. (FYI, we talked about Consciousness in Dogs in a post in August.)

Certainly, examples abound of the power of our unconscious in all aspects of life: People rate food as tasting better if it was described on the menu as “crispy chicken” or “slow-roasted beets,” versus plain old chicken or plain old beets. (Or presumably, “soggy chicken” and “raw, dirty beets.”). A detergent was rated as more effective if it came in a blue and yellow box instead of an all-blue or all-yellow box. Speakers are rated as more intelligent if they talk faster than others. As importantly, people are extremely resistant to believing that such factors have any influence on them at all: I’m reminded of some in the medical professions arguing that they were above being influenced by free and luxurious presents from drug companies. We are so very fond of our ability to be rational that we become downright irrational when hearing the facts about our own behavior.

All this has me thinking: What then, might be influencing our behavior around dogs? We know that many external factors can cause people to be more or less patient, and more or less aggressive around others. We know that physical appearance has a strong influence on our perceptions and expectations of others. Close to home, I’m thinking of the fact that our new dog, Maggie, has eyebrows that are shaped like a surprised or happy person. She also has one ear up and one ear down, which adds to her slap-happy look. 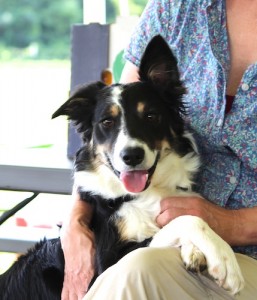 Is that part of the reason that just looking at her makes me melt? I’m about as gobsmacked in love with Maggie as it is possible to be with a dog, in spite of her not-yet-but-really-any-minute-now-fixed habit of counter surfing, which resulted in her consumption of a good part of a leg of lamb defrosting on the kitchen counter. Of course, I knew it was my fault not hers, but still, all I could do was laugh about it. Would I have been so amused if she had a different face? I’d like to think so, but . . .

What about you? Granted, we simply can’t know all the things that are influencing us–there is no translator between the conscious part of your brain and the unconscious part. But we can make guesses and I’d love to hear yours.

MEANWHILE, back on the farm: Fall is in full swing. We woke up Saturday morning to a frosty farm, with the temperature a few degrees below freezing. However, there is still a lot of beauty and color. Here are some hardy Salvia flowers, highlighted by one of my fall favorites, Solomen’s Seal with bright yellow leaves and navy blue berries. 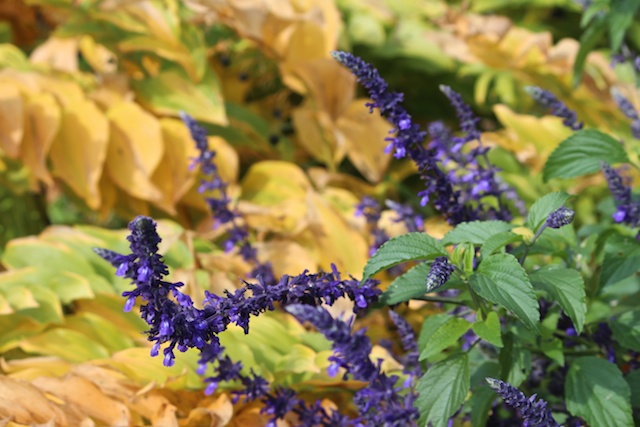 The passing of seasons feels especially bittersweet for us, because on Friday we said goodbye to two special ewes, Barbie and Rosebud. Both ewes suffered from OPP (Ovine Progressive Pneumonia) and we felt that it was kinder to put them down now rather than make them get through another winter. Both ewes were having trouble breathing comfortably, so they are now in that great pasture in the sky. Barbie was known for being a great mother to her lambs, her intolerance of the lambs of others, and her, uh, lack of knowledge that sheep are supposed to be docile and defenseless. She had a total of 14 lambs for us, for which we will always be grateful. Here she is with her last two, Holstein and White Guy. Thanks Barbie, you had quite a run. 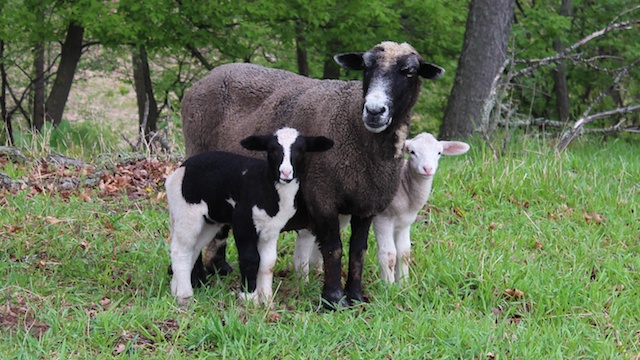 « What is so rare as a day in… September?
The Importance of Pets »