Welcome to an ongoing inquiry about the behavior of people and dogs.
Blog Home >> Animals and the People Who Love Them >> Sorry to Say (Dogs and Guilt, Revisited) 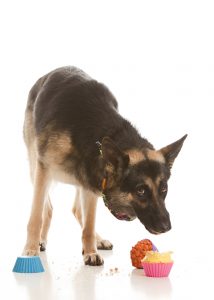 There was quite the dust up on Twitter last week about a blog in Psychology Today by Nathan Lents, titled Dogs Apologize Better Than Some Humans. Skipping the observation that humans have a lot more to apologize for than dogs do, (clown horror movies come to mind), Lents addresses the “guilty look” of dogs and wolves. He argues that what people often interpret as a “guilty look” in dogs is the equivalent of an apology. He says:

“A dog that bites too hard is punished by temporary shunning. They are removed from the social unit and ignored for a time. In order to be reintroduced, the offending wolf must approach with an apology bow and be re-admitted into the group.”

There’s more. The quote that got him in the hottest of water was this: “In a sense, an apology is indeed an expression of submission. ‘I was wrong; you were right.’ Nothing could be more submissive than that,” he said.

“No! Nope! Nopers!” said canine researcher and Scientific American blogger, Julie Hecht. “The dog’s supposed ‘guilty look’ does not translate to ‘I was wrong; you were right.’ ” I agree completely with Julie. “I was wrong” is not the same as a gesture of appeasement.

Here’s the logic of my argument, from my favorite world beyond that of dogs and flowers–food. Imagine you’re in a restaurant. The waitress is clearly busy and a bit harassed. You are ordering a BLT sandwich, but want sweet potato fries instead of regular ones. So you cock your head, crumple your eyebrows while looking chagrined and say “I know you’re busy, but could I have the sweet potato fries instead of the plain ones?” I’d argue that you are expressing appeasement, but not saying in any way that you were “wrong.” You are trying to prevent an angry outburst from someone you know might produce one, and at the same time you are trying to get what you want. But you’re not saying, “I’m wrong”. You’re just protecting yourself while attempting to influence the behavior of another in a context of potential conflict.

This is more than a theoretical conversation, because words matter to us humans, and dog owners love to accuse their dog of being “guilty” when the dog is only offering appeasement. The distinction is important, because “my dog looks guilty” often is translated into “I know he knows better” and therefore should be punished.

This is not a new issue. I’ve written about “dogs and guilt” previously in “Not Guilty, As Charged”. In 2011 I reported the results of surveys done by me and researcher Morris on “What Emotions You Think You Share with Your Dog.” (I think you’ll find the results fascinating–74% of the general public thought dogs could be guilty, while only 23% of blog-reader responders did. The results were about opposite for the emotion of disgust, which is believed to be the most primitive of all emotions.) Horowitz and Hecht have done some great research illustrating that dogs get what people call a “guilty look” on their face when they did nothing wrong, know that they did nothing wrong, but are facing an owner who thinks they did. Julie put together this brilliant video illustrating how very wrong we are when we assume that appeasement behavior means “I’m sorry, I was wrong.”

In summary, sorry to say, Nathan Lents, but I think it is wrong to say that dogs are saying “I’m wrong” when they are being appeasing. Don’t feel guilty–it’s a mistake that a lot of people make. (But we all do need to think carefully about our word choice in the future, if you would.) Actually, there is another issue here that could be explored: Lents’ argument that “nothing is more submissive than an apology”. Hmmm… if you are using “dominance” and “submission” the way animal behavior researchers have used it for decades, submission is correctly described as an appeasement behavior, but that’s not the same as an apology either. Right? Oh my, words do get us in a bit of a mess sometimes.

Your thoughts? I’m all ears. No apologies.

MEANWHILE, back on the farm: Perfect weather, perfect weekend. On Friday Maggie got to go on a long walk in the woods for the first time in three months. Happy, happy dog. And she got to work sheep for five minutes on Saturday, even better. Stopping at five minutes was ridiculously difficult, but we managed. I rested her yesterday, but will work her again today. She’s definitely regressed in terms of working sheep. She made three beginner errors on Saturday, (stopped short on her outrun, didn’t cover the sheep on the fetch, over flanked on the drive), but fixed the first two on her second run. . . and then I had to quit. Good though to be working again, even if just for a miniscule period of time.

I worked in the garden for five hours straight on Sunday, along with my hardy helpers, Heather P and Christy B. (Ask me how my joints feel. No, don’t.) The tulips below are new, and were loving the sun. You can see the wild plum trees beginning to flower in the background. And see the pointy, small tulip buds at the bottom of the frame? I have no idea what they will look like, don’t remember variety what I chose there. Can’t wait to see them. 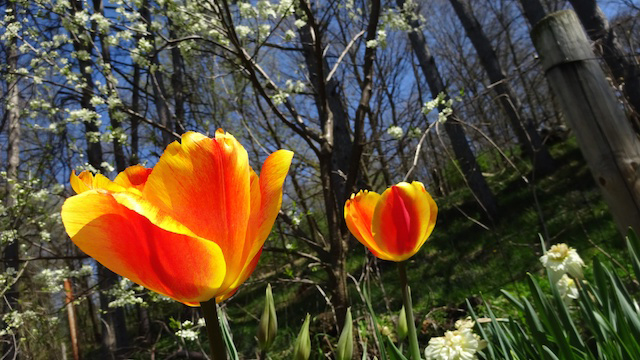 Here’s Polly enjoying the sun beside the day lily garden behind the rock wall. It’s the only place on the farm so far that is all weeded and mulched, thanks to my own efforts and those of my stalwart garden elves, Heather and Christy. It takes a village. (Polly and Nellie, by the way, say “thank you for the new, nicely prepared cat box.” Sigh.) 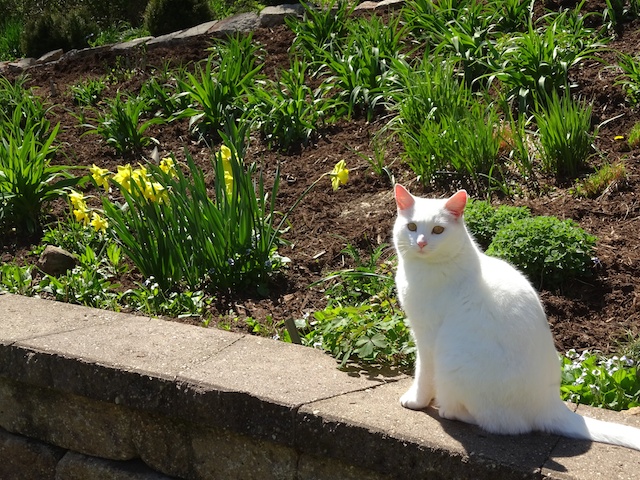 Next week I’ll write about Green Chimneys and its conference on Human Animal Interactions. I’ll be giving a talk on Saturday titled “Helping the Helper: Preventing Stress and Discomfort in Service and Assistance Dogs.” More importantly, be learning from all the other great speakers. Hope you have a great week.

« Want a Laugh? “Peanut Butter Dogs” Guarantees It
HAI. The Window of Tolerance. And Life. »