Welcome to an ongoing inquiry about the behavior of people and dogs.
Blog Home >> Animals and the People Who Love Them >> Resilience: Can We Increase It in Dogs?

I worked with a dog years ago, a little buff-colored foxy thing, who had been rescued from abominable conditions. She’d spent years tied up in a barn, expected to pump out puppies for a daily feeding of kibble and a bowl of nasty, green water.

And yet, she sashayed into my office like she’d been raised in heaven. She trotted into my office and came over right away to say hello. She loved people and got along well with other dogs. Her owners brought her in because they needed help with house training, not because she had any other behavioral problems.

Soon after, I met a retriever mix who had been raised from puppyhood in a wonderful family. He had everything going for him. Good genes. Well socialized. An enriched environment. And yet, after being attacked by another dog (no injuries, the dog lunged and knocked him down), the retriever fell apart. He was afraid to leave the yard, and became increasingly aggressive to other dogs.

Why did these two dogs respond so differently to negative experiences? One of the answers lies in what psychologists call “resilience,” or the ability to cope with aversive events. It does not mean that one never suffers, or remains chipper in the face of something distressing. It means that one can bounce back from experiencing trauma, like a tree limb bending instead of breaking.

There is a lot of research in human psychology about how one develops resilience. But is any of this relevant to our dogs? I think it might be. Circling back to the article I wrote a few weeks ago on dogs and trauma (The Boy Who Was Raised as a Dog) I thought it was important to talk about resilience, and how we can help our dogs develop it.

GENETICS: Of course, the first thing we can do is to consider “resilience” to be an important breeding criteria. Surely the ability to bounce back from something aversive is more important than a dog’s coat color or tail set. If I were queen (don’t hold your breath–it’s unlikely and I’d hate how the crown squished my hair), I’d write that into every breed’s “standard.” There’s no question that a certain amount of resilience is influenced by one’s genetics. A review article by Feder, Nestler & Charney (Nature Reviews Neuroscience 10, 446-457, June 2009) makes it clear that the genetic make up of an individual can have a significant influence on an animal’s ability to bounce back, primarily by changing the function of multiple neurotransmitter pathways. The importance of the “right stuff” (genetically speaking) is a perfect example of why, yes, it is indeed possible to be a responsible breeder, if one is focusing on producing healthy, happy dogs who have healthy and happy owners. (See my earlier post: Responsible Breeding–An Oxymoron?)

EARLY DEVELOPMENT: We also have overwhelming evidence that what happens during early development can create an adult who copes well with aversive experiences, or falls apart because of them. As first shown in 1962 by Levine, rats coped with novel situations more effectively if subjected to mildly stressful events when younger. Similar results have been found in other mammals (see “Neurobiology of resilience” in Nature Neuroscience, 2012, by Russo and colleagues.) This is the basis for the mildly stressful handling techniques made popular by Carmen Battaglia (see a video here), and well illustrated in Joan Killion’s Puppy Culture, which I reviewed earlier.

It’s important to think of the impact of early stressful experiences like a U: Mildly discomforting events make individuals more resilient, while extremely stressful ones do the opposite. Thus, while we need to raise puppies to experience novelty and mildly stressful events (but not during their “fear period”), we should be doing all we can to avoid stressing dogs too much during critical periods.

CULTIVATING RESILIENCE IN ADULTS: Ah, but here’s the rub. It’s one thing to cultivate resilience before a dog experiences something traumatizing, but another altogether to work on it after the fact. Super resilient dogs can bounce back quickly, like the dog I write about above, but others don’t, and even resilient dogs can be so profoundly traumatized that one needs to start at the beginning.

Our first job is to help a traumatized dog heal, which I address in the article about trauma that I wrote two weeks ago. If this topic is of interest to you, I advise you to read the comments–there is much wisdom and experience there. (The knowledge of some of this blog’s readers sometimes takes my breath away, and I am grateful every day for the village that contributes to this blog.) Summarizing that article, traumatized dogs need 1) a sense of safety and security, 2) a sense of control over their lives, 3) social support, 4) repeated, routine experiences of positive experiences, which take 5) lots of time and patience.

Is there anything else we can use to help dogs, based on what we know about developing resilience in people? One of my favorite science writers, Deborah Blum, wrote a great review article, Finding Strength: How to Overcome Anything on resilience in people. (Another great resource is Project Resilience.)  These sources emphasize that here is no predicting how any one individual will respond. Each individual has his or her own path to travel, and I would argue this is equally true in dogs.

This may sound trivial (of course everyone is different!), but I mention it because I’ve had so many clients over the years who were either frustrated by their dog, or felt like failures as owners, because their dog hasn’t progressed as fast as they (or others) felt they should. I remember a tiny, black lab bitch, rescued from an abusive home, who had been doing well until a metal pan fell from the counter, and scared her so much she wouldn’t come out of the bedroom for days. Or the Bichon from a puppy mill who still panicked when someone reached toward him, even a year after being rescued. And yet, so many of my clients would tell me that their friends thought that if they just tried harder, or pushed their dog farther, they’d be great in Flyball, or just love going to the dog park. So many times I’d counsel them that there was nothing wrong with their dog staying in the house and the yard until they were ready to go beyond it. Or that, yes, it really is okay that your rescued dog doesn’t enjoy agility class and you don’t need to keep trying to make her love it.

One last thing, at least for now: One of the prime components of helping people recover from trauma, and developing resilience for the future, is social support. Much of that support is dependent upon language: Someone to tell you that they have faith in you, someone to listen to your story, and talk about how to have faith in the future. We can’t use language in that way to help our dogs, but we can think about what kind of social support they receive. That is why I, and many others, believe that the presence of another dog can be a lifesaver for some dogs. No matter how much we love dogs, we still are aliens to them. We don’t “speak” their language, at least not very well, and we simply cannot perceive the world as they do. As long as a dog is comfortable around another dog, he or she can get something from a member of the same species that we could never give them. Even if it takes weeks or months for a dog to be comfortable around another, that one relationship with a member of the same species can do wonders.

I’d love to hear any experiences you’ve had in which one dog became a friend and mentor to a dog who was damaged in some way. Some of you wrote compelling notes about traumatized dogs you’ve worked with in the earlier article published two weeks ago; I’d love to hear more about whether other dogs were part of healing a dog from a difficult past, and developing resilience for the future. Thank you again for your comments so far on this topic, they’ve been amazing.

MEANWHILE, back on the farm: Willie’s shoulder is improving. His physical therapist thought his bicep tendon was a bit tight, but felt that I could gradually increase his exercise over the next couple of weeks. Willie, of course, has no understanding of the concept of “gradual,” so as soon as we took him outside off leash he did three flip spins in the garage before I could say ask him to settle down before beginning our “walk.” We’ve worked up to walking in the woods and doing short outruns on the sheep, and hopefully he’ll be in good shape for the Patrick Shannahan clinic coming up this weekend. Patrick won the Nationals with Maggie’s father, Riggs, and is the perfect person to help Maggie and I progress in our training. Can’t wait! I’ll post photos next week. Here’s Willie today, waiting to play the Find It game with me. I love how goofy his ears look. Don’t tell him I posted this picture, please. 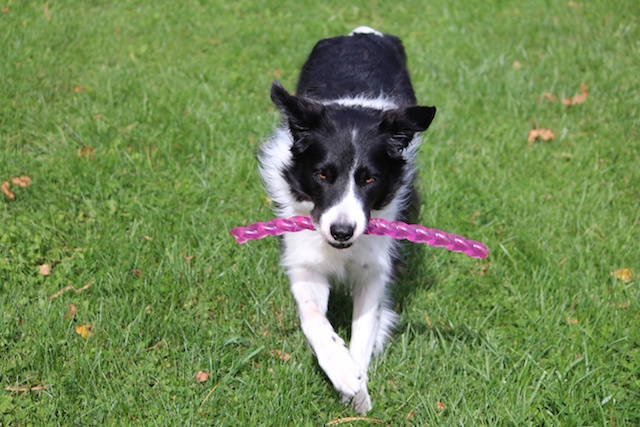 Tootsie posed for a portrait for me; given her seven years in a puppy mill I thought she was a good model for today’s article. Sweetie. 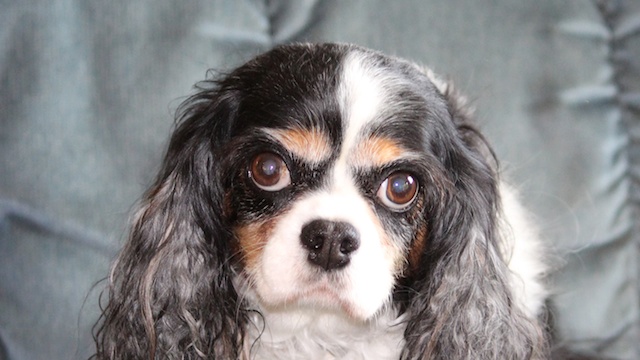 The weather has been heavenly, actually a bit too hot for my taste yesterday (82 in mid 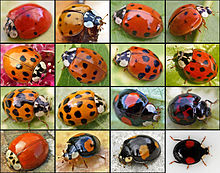 October? Crazy!). But we’ve had a heavenly fall so far; lots of sun and blue sky and bright colors appearing in the leaves. The only downside is the influx of Box Elder Bugs and Asian Lady Beetles. There are hundreds, if not thousands, clustered on our windows and siding, and many of them come inside. It’s pretty much like living in an Alfred Hitchcock movie. Just substitute “The Beetles!” for the “The Birds!” They’ll go away (or at least, over winter in any cracks they can find around the house) once the weather turns a bit cooler.