Welcome to an ongoing inquiry about the behavior of people and dogs.
Blog Home >> Animals and the People Who Love Them >> The Power of Pee

Last week I talked about John Bradshaw’s new book, Dog Sense, which I am enjoying immensely.  In it, he discusses why wolf behavior doesn’t necessarily predict dog behavior as well as any book I’ve seen. If you’re interested in this issue you definitely want to read this book.

In response to last week’s post, some thoughtful comments came in about “over marking” behavior, when one dog urinates directly on top of the urine of another. It’s traditionally been assumed to be a status-related behavior in which one dog ‘covers’ the scent of another with his or her own. However, if you look at the behavior closely, it’s not at all clear that the hypothesis holds up. Of course, as I’ve discussed in other posts, the whole concept of dominance has been mis-used and mis-understood by the public and some dog trainers for decades. (Bradshaw does a great job explaining what “dominance” is and isn’t, as has Suzanne Hetts in speeches and on her website, Animal Behavior Associates.). Remember that dominance is ONLY about who will take possession of a limited resource, and it might even be related to only one specific resource, not any others.

Nonetheless, dogs do greet one another with tail up or tail down, and they appear to be posturing in such a way to signal something–confidence? an interest in social status? But the data and observations about over marking are sending US mixed signals. My female BC Lassie always, always over marked Pippy Tay’s urine; she would actually stand behind Pippy and wait for her to go. I swear there were times on cold nights when both of us would exchange “Pip, would you hurry up and pee please?” glances. But Lassie was in no way what anyone would describe as the “dominant” or “high status” female. That was my Gr Pyr Tulip, seemed to pay no attention to where anyone else urinated at all. At the time I interpreted it thus: Tulip was exceptionally secure in her ability to possess whatever resources she wanted–none of the dogs would even think about trying to take a bone out of her mouth, and she had no need to make a point with her urine. Pippy was the super smart, obsequious one: she met all other dogs by puddling into the ground, ears back, tongue flicking, but she was nonetheless really good at getting what she wanted . Lassie’s social signals seemed to be middle-of-the-road, and I used to interpret her over-marking of Pippy Tay’s urine as a status-related one, something like the folks in corporate middle management jockeying for position while the CEO doesn’t have to worry about such things anymore.

But now I’m not sure… all I’m ever really sure of is the importance of staying open minded and to regularly re-examine one’s beliefs and assumptions. This is a perfect example of why we need more research, because we simply don’t know what over marking means. In her experiments on urine marking a few years ago, Dr. Anneke Lisbberg found no females over marking at all, but that the males who over marked tended to show the highest tail base position and be the most likely to get a bone thrown between them and another dog. I was greatly surprised that she found no females who over marked in her research–could that be because the urine was presented on a vertical surface and females simply couldn’t physically squat over it? (I’ve got a call into Dr. Lisberg, I’ll keep you posted.) By the way, if you missed it, there are two other posts about scent marking in the blog, click here to read the first.

One of the comments on last week’s post– that her “low ranking, submissive female” always waited to over mark  another dog’s urine–got me thinking about this issue again. Her suggestion, an interesting one, is that her dog was finding a way to “join up” with the other dog. I rather like this interpretation, except it would never explain Lassie’s behavior. Lassie and Pip never fought or even had any visible tension between them, but neither did they seem to enjoy each other. They basically ignored one another.

What about you? Do any of your dogs over mark the urine of another in your household? That of others? (Note that Dr. Lisberg distinguishes between “adjacent marking,” or going within a few feet of urine and “over marking,” or going on top of the other urine.  Be sure to make that distinction yourself if you write in.) I’d love to hear your experiences.

MEANWHILE, back on the farm: Willie is in surgery right now. I’d love to tell you that a PhD and 23 years as a behaviorist has made it easier to get through all this, by alas, it’s not so. If anything, ignorance is bliss. I’ve spent enough time with vets and had enough clients over the years to know too many horror stories of things gone wrong. What’s especially challenging is that Willie looks sooo good right now. With all the rest he’s had, along with great physical therapy and exercises, he’s superficially looking strong and sound. That explains why, when the vet did another exam today and it was obvious that flexing his shoulder caused him pain I said “Oh good!” I needed reminding why I am about to have my dog undergo an invasive procedure with a long recovery time. So the great news is that we’ll have the surgery behind us soon, and then it’s all downhill to a full recovery. It looks like he should be back up and better than ever by mid-August and oh my my that will be wonderful!

It’s stunningly beautiful out here right now. Low 60’s (actually was frost on the ground this morning!) and blue sky sunny with horse tail wispy clouds and fresh baby mint-colored leaves budding out in the trees. The Orioles are singing like flutes, and last night I went out with Willie and worked the sheep for one brief, heavenly moment before that is out of the question for two or three monhts.

By the way, Snickers, Truffles and their lambs went to a great new home on Saturday. I needed to cull them from the flock, but wouldn’t ever ship one of my ewes, so they went to a kindly woman who needed sheep for her working BC. I am confident they’ll be well cared for and it feels great to have found them such a good home. The flock seems so small now! Redford the Ram is at a friend’s and I now only have 5 ewes and 12 lambs.

Here’s Willie last night, right after his pre-surgical exam at the vet school. The harness is so that I could lift him out of the car without him having to jump down. 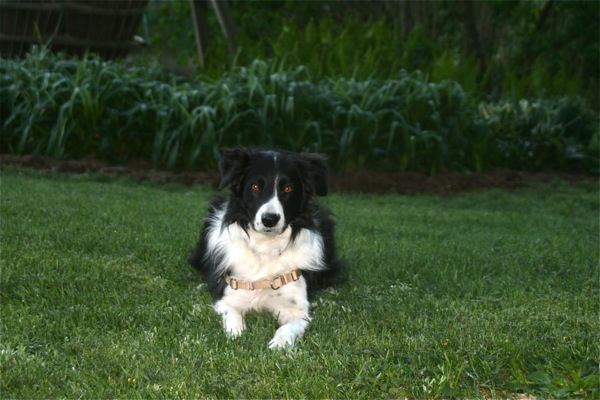 « Female Dogs More Attentive than Males?
Laughed ’til I Cried; Cried ’til I Laughed »