Welcome to an ongoing inquiry about the behavior of people and dogs.
Blog Home >> Animals and the People Who Love Them >> The Mystery of the Overmarking Express

Well, we must be making progress. After reading every single one of your comments, recording them by sex, familiarity and social status (maybe, sort of, more on that later) and comparing it to Dr. Anneke Lisberg’s research on urine marking, I now am completely flummoxed about what it all might mean. But you know how the learning curve often gets steeper once you’re making some progress (same thing happens in dog training, right)…. ? Maybe total confusion means we’re getting somewhere?

Here’s what I came up with when summarizing your comments. First, an explanation: I recorded sex of over marker and over markee if known, or noted it as ‘unknown” if necessary. I recorded if the urine first deposited was from a familiar or an unfamiliar dog. Finally, I recorded the writer’s description about the social relationship of their dogs. This is obviously the fuzziest part of the project–so fuzzy for so many reasons that we can’t begin to call this “research,” but given that the traditional explanation of over marking has been that it is most often done by a “dominant” dog, it seemed impossible to ignore completely. Aware of all the obvious problems, but believing there might be some value in it, I categorized a dog as “dominant” if the writer used that term or described the dog as the one who had priority access to preferred resources. The other categories were “not dominant,” if the writer used those words or in some way stated that, in their belief, the dog was not highest in social status in a group of dogs, and “unknown” if the writer didn’t address that topic, or directly stated that they didn’t know. And yes yes yes, of course, this is a complicated and controversial topic. I address it at length in earlier posts on August 7, 2010 and in a series of posts starting on March 31st, 2010. I don’t want to get too lost in the controversy of social status here, but I will summarize that 1) the term “dominance” is misused and misunderstood relentlessly, 2) has not been discarded by researchers who study behavior in wild animals and 3) all it means, if use correctly is: who predictably would get the bone/toy/best place to sleep between 2 individuals if they both wanted it equally.  (Note one comment asked a great question: “How much of a behavior … is true submission and how much is lack of confidence in the ability to win?”  Great question, because that’s actually the EXACT definition of the terms! It’s ONLY about individual’s judgments about who is likely to win and how that informs their decisions about who gets a resource.)

Argh, I didn’t want to get lost in a discussion about social status, especially given that it’s a mine field, but again, it’s hard to talk about over marking without bringing it in. So, given that digression, here’s a summary of your comments:

– No “dominant” male dogs were reported out of 91 comments to over mark over the urine of familiar males or females.

– There were 14 instances of “not dominant or submissive” dogs over marking the urine of familiar males or females.

– There were 17 instances of male dogs who social status was not known or stated, who over marked the urine of familiar males or females.

What stands out most to me is that:

1. Both males and females over mark (but note that many people commented that many of their dogs never overmarked). The behavior appears to be common, but NOT universal.

2. Many more “not dominant” dogs over marked than ones described as “dominant.” I can add to that myself: I had 4 dogs for 12 years, Queen Tulip the Gr Pyr, who without question was the one would got the bone, and 3 BCs who would never have even tried once she growl/barked them away a few times. Tulip seemed to pay no attention to where the other dogs urinated, and no one ever over marked her urine. Lassie over marked Pippy Tay’s urine 95% of the time. Pippy Tay was older and would be described by many as “submissive” or “appeasing” while Lassie was less so, a “middle of the road” dog. Luke, the intact male, sometimes over marked and sometimes didn’t.

The large number of “non dominant” over markers could be explained by demographics–perhaps there were that many more dogs described as such. But I went back and added up the number of dogs described as “dominant” or “not dominant” and there was a 1:2 ratio, which is much lower than the ratio of over markers to non over markers. My conclusion is that the one thing we should be able to take from this project is that social status is NOT a predictor of over marking within familiar dogs, at least not in the simplistic direction previously assumed.

And yet, wouldn’t you know it, Dr. Anneke Lisberg’s research on urine marking came up with very different results. In one study she presented small wooden stakes annointed with the urine of male, female, familiar, unfamiliar, intact and neutered dogs. The sample was all of Labradors (20) and she found that no females over marked (but perhaps because they couldn’t squat on the stakes?) and a strong correlation between high tail position and over marking in males. She also looked at “counter marking” in a dog park (she had no way of knowing if the mark was exactly over the urine or just adjacent) and found that both males and females counter marked, and that high tail position also correlated with frequency of counter marking. (And that high tail position also correlated with who got food tossed on the floor equidistant between 2 familiar dogs.) If marking was done to the urine of unfamiliar dogs, it was done mostly by males with high tail positions. Whew. Confused yet?

What could all this mean?  All I feel comfortable saying now is that the plot thickens. One thing that comes to mind is that 1) perhaps over marking means something different if done to familiar versus unfamiliar urine, 2) that we have no idea yet what the trigger actually is–that perhaps it has NOTHING to do with status, but something else altogether: Age? (several people mentioned that younger always over marked older). Something discernible in the urine that we have no clue about? Health status? I suspect myself, especially given Anneke’s research and the knowledge that over marking in wolves is most often done by breeding pairs (on each other’s urine) that very important messages are being sent … and we don’t have a clue yet what they are!  By the way, Anneke is continuing her urine marking studies, I can’t wait to hear the results of what she’s working on now.

A few interesting random comments: Several people have dogs who over marked coyotes (scat? urine? if urine, how know?), many of you have dogs who actually pee on other dogs (Luke did that too sometimes, as if he was too impatient to wait for the dog to finish urinating), several people mentioned dogs who began over marking once the other dog became ill, many people noted that the over marker was somewhat anxious or insecure, and a few commented what a strange world it is that we are all spending time on pee and poop. (And there was one request to talk more about poop; let’s save that for another day!

If you’re not sick of this topic, send in a comment that is VERY specific that might help us relate our observations to Dr. Lisberg’s research. Note the tail position (TP: Low= below parallel to the ground; Med = parallel to the ground; or High= close to vertical or vertical) and correlate it with over marking. Just send the facts, ma’m…. ex: Female, Med TP, OMs onto Dom Fam Female or Male, Hi TP, OM’s Subm M. Record the TP as the dog walks toward the area to urinate, not as he or she is actually urinating. If the social ranking question makes you grit your teeth, just ignore it.

MEANWHILE, back on the farm: Willie and I are going day by day. Surgically, I think he’s doing extremely well. The incision looks great, the swelling is going down and he’s doing a great job with his physical therapy exercises. He spends a tremendous time in his crate, and I spent a lot of time away from the farm. I know when I’m gone he settles in, just sleeps, rather than fussing when I’m home about why everything has changed and he isn’t out loose in the house. Actually, it’s not him that’s fussing, it’s me. I just hate walking by his crate so often and seeing his perplexed face. We’re doing okay, but I won’t pretend I don’t miss my regular life, and I’m sure he does too. I am, however, overwhelmed with thanks that Willie is such a good boy, and already was trained to accept PT while lying on his side, and is a perfect dog in his crate. (There is an exception: when I’m outside in the yard he barks if he’s stuck in the crate. This is a new issue because normally he’s outside with me or loose in the house. Right now I’m dealing with it through management and prevention: I am ignoring my garden and flowers and spending my home time cuddled with Willie on the floor or doing his PT, which takes about 1.5 hours a day. And in case you haven’t heard, Willie does indeed love me again! Whew.

I do have some great news: My kitty Sushi has had a lot of health challenges lately and I took her in yesterday for an ultrasound to check for cancer. I didn’t even mention it because it seemed like the news from the farm was just relentlessly grim. So I have GOOD news! No tumors, no bladder stones, no strange weird things appearing on the films. And now Sushi has a shaved belly, so she fits right in with Willie.  Who knew dogs and cats could get a Brazilian?

Here’s Willie boy after I said “Acupuncture” which is his cue to lie down on his right side and put head to floor. 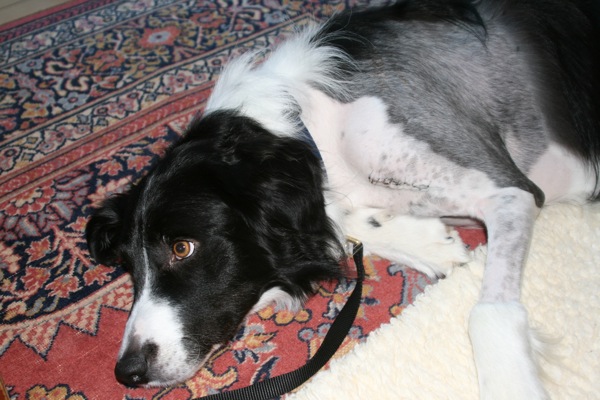 And here he is after I took the picture above, instead of starting his therapy as usual! Anyone want to take a guess what he was thinking? 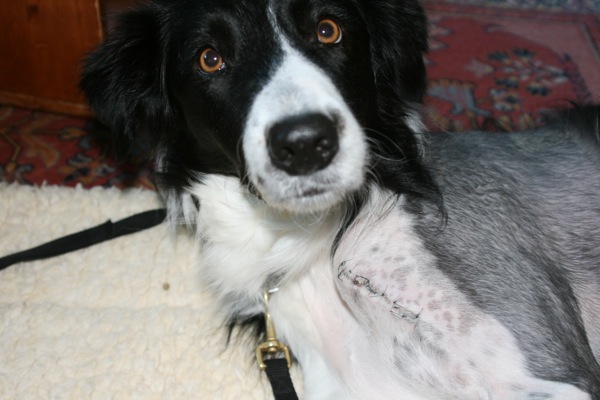 « Laughed ’til I Cried; Cried ’til I Laughed
Just Enough Exercise to Wake Up Our Dogs? »